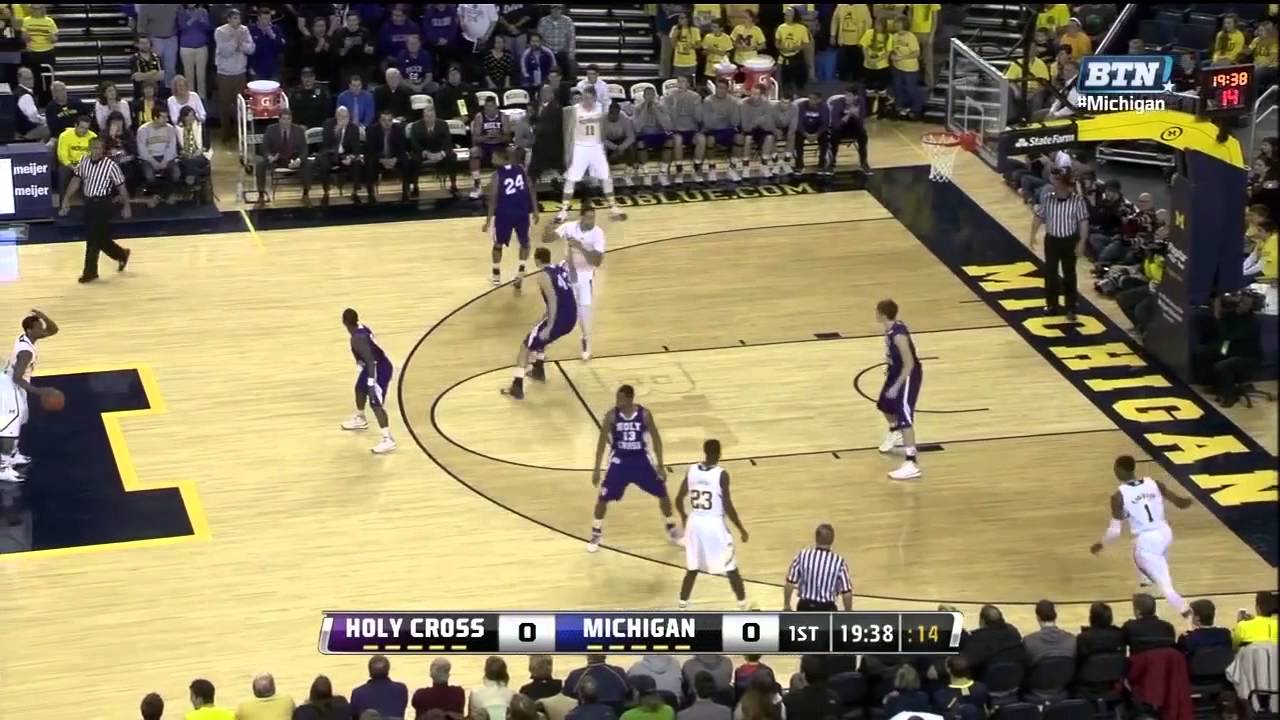 Michigan fans have seen Glenn Robinson III turn up his aggressiveness over the course of he past few games, and the Wolverines’ 88-66 win over Holy Cross continued that trend. Robinson got started early and was featured on the very first offensive play of the night for Michigan. Fans have seen the various ways the Michigan coaching staff has endeavored to get Robinson involved in the offense, but this set has been rare. On this play, Derrick Walton waves off a screen from Jordan Morgan and calls for Robinson to be the screener, with Robinson cutting up from the corner. Robinson sets the screen and Dave Dudzinski elects to hedge on Walton as Robinson pops out to the 3-point line. Walton finds Robinson, and the sophomore knocks down the open shot. It’s a pretty simple pick-and-pop, but it’s also encouraging to see Robinson utilized in that set given his shooting ability. While it may seem like a good way to get Robinson involved in the half court, John Beilein said after the game it was a reaction to a particularity of Holy Cross:

“We hadn’t done a lot of that,” Beilein said. “We picked up something in their scouting report that said they were going to hedge that 4-1 ball screen, so we went with it. Those are the calls we have to make and then read it as the game goes on.”

2) Michigan gets out on the fast break

Michigan’s fast-break offense was nearly unstoppable on Saturday. The Crusaders simply had no answer for the Wolverines when they were able to get out and run off misses. Obviously, Michigan’s was able to take advantage of the fast break because of its ability to clean the defensive glass: the Wolverines rebounded 80 percent of Holy Cross misses. However, what truly stood out was which Wolverines were corralling those misses. Of plays where Michigan was able to get out and run, the vast majority were instigated by guard rebounding. Nik Stauskas and Caris LeVert combined to pull down 13 rebounds, and if you throw in Glenn Robinson III’s rebounding numbers, the trio combined for 20 total boards. When they got defensive rebounds, the guards (and Robinson) didn’t hesitate to push the ball. On the first play of this sequence, Stauskas takes the ball to the hoop himself after getting the defensive rebound — he crosses up Eric Green as the defense is getting set. Stauskas again makes things happen on the next play, this time pulling down a tough defensive board in traffic and taking the ball all the way to the hoop. He makes a great drop-off to Jon Horford at the rim, drawing the attention of four defenders before leaving it for the big man. Robinson gets in on the action after grabbing a deflection off the backboard and pushing the ball upcourt for a left-handed finger roll that required an athletic mid-air hand-switch. Derrick Walton gets a defensive rebound and gets the ball to LeVert on the wing, who takes it in for a dunk. Finally, LeVert grabs a rebound and pushes the ball to Robinson, who’s fouled on the way up. Michigan’s transition offense was lethal in this game, largely because of good guard rebounding.

3) Jon Horford produces in the first half

All eyes were on both of Michigan’s big men on Saturday, and Jon Horford did his part toward Michigan’s offensive effort in the first half. Tasked with replacing the production of Mitch McGary, both Horford and Jordan Morgan stayed within themselves and while their numbers weren’t mind-blowing they gave Michigan what it needed in this game. Horford finished with a nice stat line: 10 points, five rebounds, an assist and a block only 16 minutes. In the first half, he had an impressive stretch. On the first play of this sequence, Horford gets one of those isolation post-ups Michigan fans have gotten used to seeing from him, and he takes advantage. Guarded by Malachi Alexander, Horford backs him down on the block, giving him a nice shoulder to establish some separation. From there, Horford pulls up for the short fadeaway and nails it. That’s a good move and especially difficult to contest because of Horford’s length. The next play could have easily been featured in the above fast break compilation, but the difference between it and those plays is the fact that Horford, a big man, got the rebound and made a great outlet pass rather than push it himself. The redshirt junior finds Derrick Walton already across half court, allowing the point guard to take it himself for the tough lay-in. Finally, Horford gets fouled backing down his defender. He probably shouldn’t take so long to establish position with the ball, but that time it paid off. Beilein said he liked Horford’s production but stressed decision-making in the post: “I think a couple times Jon (Horford) was really aggressive. Sometimes he still has to have a little bit better shot selection when we post him up.”

This play came in the second half as Michigan was pulling away from the Crusaders, and I think it provides a good counter-balance to the frenetic fast-breaking from the first half. Here, the Wolverines displayed patience with the half-court set and made great decisions with the ball in the course of getting a good shot in rhythm. This play is especially interesting in light of Beilein’s comment after the game about Michigan’s ‘read and react’ offense.

“One of our things is, ‘The ball talks,’” Beilein said. “There’s no plays being called — there’s looks, there’s action, you counter and you read and react. And we went with that almost exclusively today. … We are teaching that more and more than we ever have right now.”

This seemed to be a good example of this read-and-react philosophy — Michigan ran its action and let the ball “talk.” Caris LeVert could have gone up with the ball for a contested layup quickly after beating his man beyond the 3-point line, but elected to kick it out to Nik Stauskas. Stauskas passes it back to LeVert, who declines a possible 3-point attempt. Michigan then swings the ball around the perimeter, with Jon Hoford ending up with the rock at the top of the key. Horford actually makes a terrific back-door pass to Spike Albrecht. Albrecht makes the correct decision by not going up against two big men, electing to kick the ball out to Stauskas, who makes a touch pass to Zak Irvin, who knocks down the corner three. Just great ball movement and smart decisions all around for Michigan on this possession.

Jordan Morgan has gone from one of Michigan’s most consistent starters to seeing his minutes drop precipitously last season with the emergence of Mitch McGary now back to playing significant minutes because of McGary’s injury. The redshirt senior came to play on Saturday and played within himself: the big man had six points and five rebounds in 22 minutes and didn’t miss a shot from the field. Here’s Beilein on Morgan’s play:

“I thought Jordan was really solid tonight,” Beilein said. “He got some 50-50 rebounds he used to get, and he got tired. He didn’t hedge a couple ball screens and we took him back out of there because he just got tired. He hasn’t had that type of game minutes.”

On the first play, we see Morgan setting a quick screen on the secondary break, something Michigan does a lot of with McGary. He slips the screen almost as soon as he sets it at the top of the key and Stauskas finds him rolling to the basket for the easy layup. On the next play, Morgan shows off a piece of his game Michigan fans aren’t used to seeing: his passing ability. Glenn Robinson makes a back-door cut and Morgan hits him in stride, enabling the sophomore to finish at the rim with ease. Great pass by Morgan. Finally, Morgan grabs an offensive rebound among three Holy Cross players and nails the putback with the foul.