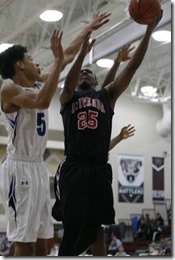 DJ Wilson had something of a national coming out party at the Max Preps Holiday Classic, leading Capital Christian to the Championship Game where they’ll face Jackson (WA) tonight.

Wilson made good on the rare opportunity to play with his high school team in front of national scouts. Capital Christian knocked off Orangewood by 42 points, Beverly Hills by 13 points, Etiwanda by six points and Westchester by 4 points. Wilson had 15 points in the win over Orangewoo and 23 points and seven rebounds against Beverly Hills.

The win over Etiwanda, ranked No. 5 nationally by USA Today, was perhaps most impressive. Capital Christian won the game 48-42 and Wilson had 11 points and 10 rebounds in the victory. Wilson followed that performance up with nine points in a 47-43 win over Westchester in the semifinal. Despite an enrollment of only 400 students, Capital Christian has picked up some big wins this season against strong competition.

National scouts in attendance were impressed with Wilson’s play. Rivals on opening night:

Rivals.com didn’t focus as much on Wilson, even though the plan originally called for watching much more of his game. A 6-foot-8 combo forward who ranks No. 135 nationally, Wilson is finally completely healthy and is showing a level of athleticism to which he has never come close in the past. He sprinted the floor for dunks and was blocking shots and grabbing rebounds above the rim.

Wilson’s physical development is notable. He was just 6-foot-5 in the spring of 2012, now he every bit of 6-8, and maybe 6-9. He has good length and has a frame that will fill out quite well in college. Wilson’s shooting also stood out. He has good-looking form and is a confident shooter from both mid-range and three. Wilson’s hands are good, as is his touch around the basket.

The reach on Capital (Sr. F), DJ Wilson, makes it impossible to box him out on a missed shot. Off. Reb > Def. Reb #MaxPrepsHolidayClassic

DJ Wilson drops a nice assist to an open shooter, for three. Really like this kid, if he can add some size (height, strength). IQ is there.

DJ Wilson ( @Lanky_Smoove ) is an intriguing prospect, Capital Christian will go as far as the Mich commit can take them this season #State

Here are full game highlights of Capital Christian’s wins over Westchester and Etiwanda.

Kameron Chatman was playing at the same event as Wilson and drew plenty of headlines as well. Chatman tallied 28 points, eight rebounds and five assists in an overtime victory over De La Salle on the opening night. Chatman hit a game winning three and also was pivotal in forcing overtime. Video highlights here.

Chatman also had 21 points, six rebounds, four steals and three blocks in a win over Open Door and 28 points and 16 rebounds against Wenonah.

Rivals was impressed with Chatman’s performance:

One of the most cerebral players in the country, he showed off all of his high-end hoops IQ and skill level while scoring 28 points in a hard-fought, low-scoring affair. By the way, he was responsible for two game-winning plays in the process.

A dangerous player in the mid range. Chatman is money with the turnaround 15-footers and pull-up jumpers, and his passing 12 to 17 feet from the hoop is exquisite. That passing was evident at the end of regulation with his team trailing by one; he could have forced a contested 18-footer but instead zipped a pass through traffic to an open teammate under the hoop. His teammate couldn’t convert the bunny but did get fouled with 0.7 seconds left and made one of two to send the game to overtime. In OT, Chatman calmly sank a 22-footer from the right wing with less than two seconds to go to give his team the win.

Players make plays, that’s a given. But what was so impressive about Chatman’s two game-winning plays was the level of maturity he showed and how he was patient enough to make the right plays in critical situations. Not a lot of high schoolers have that, and it should help ease the transition to college ball. He isn’t a mega athlete, but his smarts, skill and a body to work with in the weight room should allow him to be an impact player in Ann Arbor.

For his size, Chatman has tremendous ball skills, an impressive feel for the game and is a very good facilitator. Of Chatman’s 11 field goals, four were mid-range pull-ups. He’s comfortable shooting off the dribble and also has confidence in his post turnaround jumper. In all, Chatman finished 11-for-17 from the field and scored 28 points.

Jalen Brunson had 23 points in a win over Morton and 19 points, five rebounds, five assists and three steals in a win over New Trier. The class of 2015 point guard has a big match-up with Glynn Watson in the Proviso West Holiday Tournament today.

Brunson wants to “know where he’s going before the season next year” and might cut down his list after AAU season. He visited Michigan STate, Michigan, Villanova and Temple this fall. He updated his recruitment with Chicago Hoops in the embedded media player below.

Kennard tallied 45 points in a win at the Beach Ball Classic over Mullins on Friday. He scored 30 points in the first 20 minutes of the game. Kennard also tallied 41 points and 18 rebounds in a 89-51 win over Eaton.

The 6-foot-5 junior is on a ridiculous scoring rate this season, averaging over 40 points per game.

“He’s a once-in-a-lifetime player for our whole area, not just our school,” Franklin coach Brian Bales said. “This is a guy who, I think it’s safe to say, he’s going to be playing at the highest level at college and he’s got a legitimate chance to be in the NBA.”

The plan for Kennard is still to commit before the end of this school year.

It’s a tossup if Kennard will verbally commit to Ohio State, Kentucky, Duke, North Carolina or any other college power of his choosing. He has said he’ll pick sometime early in 2014. He also is uncommitted on playing football as a senior.

“We plan to (commit) the end of this year,” Kennard explained this past fall. “Plans can always change, too. Anytime between now and the end of my junior year. It’s going to be a tough choice and I haven’t really thought about that yet.”

While John Beilein was recently down to watch Kennard play, the Kennard recruitment is an up-hill battle given his mutual interest with Kentucky.

Jalen Coleman had a game-high 17 points in a 65-51 win over West Oaks and Coleman also had 20 points, 13 in the first half, in a 84-51 win over Mitchell in the Mike Miller Classic in South Dakota.