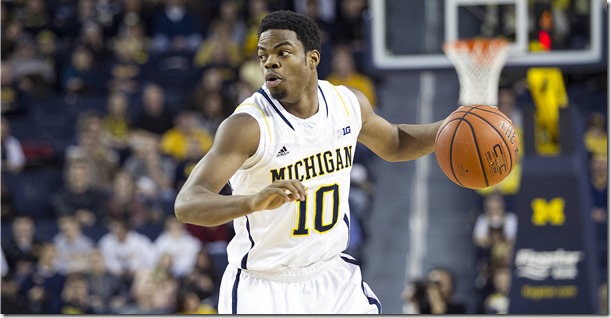 Michigan wrapped up its non-conference season on Saturday with a decisive victory over Holy Cross. However, the ease with which the Wolverines dispatched the Crusaders was far from indicative of their season to this point. Michigan played an extremely challenging schedule and came away with an 8-4 record, dropping all three of its truly marquee games (at Iowa State, at Duke, vs. Arizona) and one game it should have won (Charlotte). Michigan did get close wins over Florida State and more recently against Stanford at a neutral site, but this team remains a work in progress. We looked at some of the big-picture takeaways from the non-conference season and what they mean heading into Big Ten play.

The point guard position is still a question mark

Unfortunately, Derrick Walton has done little at this point to ease Michigan fans’ trepidation regarding the point guard situation. Walton is still getting his feet wet, and while it’s a safe bet that the freshman will eventually develop into a strong lead guard, he simply isn’t there just yet. Going into Big Ten play, Michigan is essentially splitting time between its two point guards — about 60-40 in favor of Walton in terms of minutes. Each option has their strengths and drawbacks. Walton is a better one-on-one defender than Spike Albrecht, though he is still working on his team defensive concepts (the Charlotte game comes to mind) and his ability to play well against high-level competition remains in doubt (think 14 minutes against Arizona). Offensively, Albrecht has the upper hand. He doesn’t turn the ball over nearly as often as Walton and his effective field goal percentage is much higher. There have also been times during the season when it has been obvious that the offense simply flows better with Albrecht on the court.

For the first time since Darius Morris’s freshman season, Michigan is without a true playmaker at the point guard spot. This means the offense will be leaning on the Wolverines’ perimeter scorers — Nik Stauskas and Caris LeVert — as well as Glenn Robinson III. This has already proven to be the case, as Walton has played off the ball perhaps more than any other Michigan point guard since Stu Douglass. The offense is mostly in the hands of Stauskas and LeVert, and I wouldn’t be surprised to see LeVert play significantly more point guard in conference play.

Michigan must adjust to life without Mitch McGary

Losing Mitch McGary for an extended period of time, with the distinct possibility that he will be lost for the season, is a recent development for Michigan — but it’s not something the Wolverines are wholly unprepared to deal with. McGary didn’t play during the preseason and sat out four regular-season games before he was officially sidelined indefinitely. Not only that, but with his lower back condition looming over the coaching staff’s head since the offseason, the coaches have been forced to prepare for his absence.

Michigan is obviously a much better team with McGary on the court, but his being out indefinitely doesn’t necessarily mean the sky is falling. What does it mean? It means more playing time to be split between Jordan Morgan and Jon Horford, and a likely rotation role for Max Bielfeldt in the likely event that one of those bigs finds himself in foul trouble. It also means the nature of the post will change in the Michigan offense — in that it will look much like it did before McGary’s emergence. John Beilein has repeatedly stressed that the coaching staff was preparing to play through McGary quite a bit this season given the sophomore’s versatility and passing ability. Instead, Michigan fans will likely see more of what they’re used to with Horford and Morgan. Horford will probably continue to see looks in isolation post-up situations, while Morgan will continue to be mostly a screen-and-roll man whose main objectives will be rebounding and finishing.

The key for Michigan’s two featured bigs will be to simply play their games and not get caught up in replacing McGary’s production. The final implication is that we have probably seen the last of Michigan’s two-big lineup. Small ball is here to stay and that means Glenn Robinson III and Zak Irvin will man the four position. Excluding the occasional extenuating circumstance, it seems there just isn’t enough offense on the court to justify it and the possible bump in rebounding would be marginal at best.

Glenn Robinson III is (hopefully) coming into his own

The offensive production of Glenn Robinson III throughout the non-conference season has been one of the most talked-about subjects in Michigan fandom. The sophomore struggled through much of the non-conference slate, especially against high-major opponents, before finding his way against Arizona. There’s no denying Michigan needs Robinson to produce. In its three losses outside the close call against Arizona, Robinson was mostly ineffective: against Iowa State, Robinson scored 12 points on just 3-of-9 shooting; against Charlotte, he only played nine minutes due to injury; against Duke at Cameron Indoor, Robinson managed only eight points and missed both his 3-point attempts. Since that loss, Robinson is averaging just over 19 points per game, including a 20-point effort against one of the best defensive teams in the country in Arizona.

But it’s not just the amount of points Robinson is scoring — it’s how he’s scoring them. Robinson appears to be getting more and more comfortable in the role of playmaker in the half court, displaying an ability to drive one-on-one and finish at the rim. Part of Robinson’s early troubles can be attributed to a shift in his method of scoring. As Dylan illuminated earlier in the season, Robinson’s shot attempts at the rim have dropped precipitously since last season, and without Trey Burke feeding him looks, he has been forced to find different ways to score. Undoubtedly one of the most effective ways to get Robinson going is in transition. Though his field goal percentage in transition isn’t appreciably better than his percentage in the half court, it is obviously where Robinson is most comfortable. If Robinson can keep up his play of the past three games on a consistent basis in Big Ten play, Michigan will be in good shape.

This may be one of the more alarming realities about this Michigan team — the Wolverines simply aren’t good at defending in transition. Take this final offensive possession for Stanford in Brooklyn as a perfect example. That should just never happen. The troubling aspect of this issue is that it appears to be getting worse. Earlier this season, Dylan studied what was ailing Michigan’s defense. At the top of the list was poor transition defense. At the time, teams were shooting an effective 63.2 percent in transition against Michigan — that number has since climbed to 66 percent. Needless to say, this is not a promising trend.

Traditionally, Michigan’s effective field goal percentage in transition allowed has hovered around 54 percent. So fans can hope for a progression to the mean in that sense. However, this is an area where losing Trey Burke and Tim Hardaway Jr. may have an underrated effect. The loss of Michigan’s two most effective players on offense means more missed shots and more opportunities for Michigan’s opponents to get out and run. Back in September, we did a pretty extensive study on the correlation between offensive rebounding and transition defense and concluded that there isn’t much there. However, we also concluded that it would be on Michigan’s wings to curtail some of the problems in transition defense that the loss of Burke and Hardaway were sure to expose. This hasn’t happened yet. Transition defense is probably the most pressing defensive issue Michigan must address heading into Big Ten play.