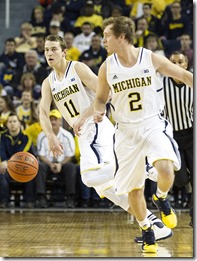 During a teleconference on Wednesday, Beilein said he doesn’t expect to draw upon anything he learned coaching against Rick Pitino in the national championship game while preparing for the Gophers.

“I’m sure he has a lot of similarities to the way his father coaches, but at the same time, he’s his own coach,” Beilein said. “They’re going to play multiple defenses, they shoot as many threes as we do. You got great guard play, and that’s really key for the way he’s playing. Never coached against, obviously, Florida International or him personally, so we begin that process of scouting what he likes to do and what his staff likes to do.”

The Wolverines are opening up the Big Ten season on the road against a Minnesota team that holds an 11-2 record, albeit with an extremely light non-conference schedule. The Gophers’ two losses came against Syracuse and Arkansas, but they did get a win over Florida State in the Big Ten-ACC Challenge.

With Minnesota starting four juniors and a senior, Beilein said he is preparing to face a veteran team.

“Again, we see a lot of veterans or they’ve been able to boost their roster through transfers,” Beilein said. “As a result, they’ve got a bunch of fourth-year players who are redshirts playing up front. And then the Hollins tandem that we’ve seen now for three or four years. They’re just excellent guards.”

A transfer player or particular interest is junior Deandre Mathieu from Morehead State. Standing only 5-foot-9, Mathieu has been one of the most effective players for the Gophers this season.

“What I love about (Mathieu) is he gets elevation on his jumpshot,” Beilein said. “His assist-to-turnover ratio is incredible. He doesn’t shoot threes much but when he does they’re really good shots because he’s shooting such a high percentage. He just seems to be in control and running the team. It’s been really really helpful for them.”

For those calling for Spike Albrecht to start at point guard over Derrick Walton, conference play won’t bring any hoped-for changes. Beilein said he is going to stick with Walton at the starting lead guard spot despite the freshman’s early ineffectiveness.

“(The current lineup) seems to be what has been successful for us so far,” Beilein said. “We get a good spark off the bench from both Spike and Zak Irvin.”

Albrecht, Irvin and Jon Horford will be the first three Wolverines off the bench, with Jordan Morgan taking over the starting center position in McGary’s absence.

One area that is particularly affected by McGary’s injury is the possibility of Glenn Robinson III playing much at the three position. The only way that was going to happen was if McGary got comfortable playing the four. Now, it appears Robinson will be operating at the power forward spot for the foreseeable future — just like last season.

“If we would have been able to been successful in that plan, we would have needed a whole September and October with Mitch playing in that situation and get him so we could at least get him some time over there,” Beilein said. “But we never really got to that because when he came back, the one position he really knew was the five. Those differences in position can be night and day in terms of our sets. So we never really got to that point other than him running a few things. We have been playing the way we played before all year long, virtually.”

Mitch McGary will be undergoing back surgery and the date and time has been decided upon. Beilein said it will happen “shortly” but would not elaborate beyond that.

“I think it’s important that when people have surgery we don’t have to make a national — he’s going to have surgery, it’s going to be shortly,” Beilein said. “Let’s not talk about dates and things like that. I don’t think that’s anybody’s business. But it will be shortly.”

While much of the focus surrounding the injury is on the basketball consequences, McGary’s court presence and boundless enthusiasm is something the coaches are concentrated on replacing.

“There are very few that will be like Mitch,” Beilein said. “Mitch really has that fire. On the other hand, I’ve seen between Jordan and Jon, our two captains, I’ve seen that a bit. Glenn is more of a quieter leader, but he can say things. Your primary guys who have to be involved in this are your point guards. They have to be involved in being an asset verbally on the floor for you. We’re looking at all those areas every day. That is a big replacement, because Mitch brought a lot of energy to our team.”