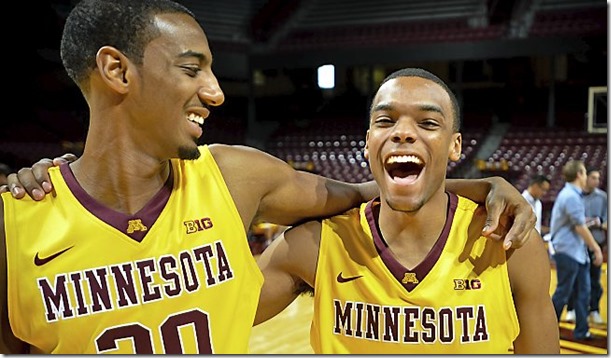 Michigan has a clean slate as it opens Big Ten play tonight. The Wolverines are without Mitch McGary for the foreseeable future, but conference play should provide new opportunities after a somewhat disappointing 8-4 start in non-league play. Big Ten season starts on the road as Michigan travels to Minneapolis to face Richard Pitino in his first Big Ten game as head coach at Minnesota.

Pitino’s first season has gone fairly smoothly as Minnesota has cruised to an 11-2 non-conference record. The Gophers are undefeated in the continental United States, including a quality win over Florida State, but they struggled in Maui where they lost to Syracuse and Arkansas. The majority of Minnesota’s wins, similar to Michigan, are over teams in the bottom half of Division I basketball, but the Gophers should enter conference play with confidence and experience.

Recent trips to Minnesota have been favorable for the Wolverines, who have topped Minnesota in eight of their last nine meetings including the last four games at Williams Arena. While the Wolverines matched up very well with Tubby Smith’s Minnesota teams, Pitino’s new-look team should provide a new challenge for John Beilein’s group.

Tubby Smith’s offenses at Minnesota generally had one major strength (offensive rebounding) and one major weakness (turnovers). Richard Pitino’s Gopher offense is very good, ranked 26th in adjusted offensive efficiency, but doesn’t have any glaringly obvious strengths or weaknesses. The one thing Pitino’s group hangs its hat on is the three point shot. Minnesota attempts 40% of its field goals from outside the arc, about the same ratio as Michigan, and connects at a 36% rate. The Gophers also shoot 49% on twos (157th) for a 51% effective field goal percentage (109th). The turnover woes that plagued Tubby Smith’s teams appear to have been remediated, the Gophers give the ball away on 16.3% of their possessions, but this team isn’t nearly as dominant on the offensive glass, rebounding 36.4% of its missed shots (59th). Minnesota has scored at least a point per possession in every game this season, but comes into tonight’s game on the heels of its worst offensive performance of the season against Texas A&M Corpus Christi.

The Gopher defense is rated 68th in adjusted defensive efficiency. Minnesota has defended low-major foes very well but was shredded by Syracuse and Arkansas. Again, there are no major strengths or weaknesses. The Gophers rank between 50th and 100th in all four factors: 47% eFG% allowed, 21% forced turnover rate, 70.6% defensive rebounding rate and 34.5% free throw rate. The Gophers defend the three very well, allowing just a 29.4% 3-point shooting percentage, and also do a good job of forcing opponents to shoot mid-range jumpshots. Despite preventing shots at the rim fairly well, just 23.4% of opponent field goal attempts are at the rim, the Gophers are the fourth worst in the country at actually defending those attempts with a 73.7% field goal percentage allowed at the rim. Minnesota will experiment with some trapping and zone defenses – Pitino’s team at FIU was one of the best in the country at forcing turnovers last season – but has been just above-average forcing turnovers this season.

Just as it has for the past couple seasons, the Minnesota scouting report starts with the name Hollins. Andre Hollins and Austin Hollins have been around a while now and continue to improve. Andre is a great ball screen player that loves to shoot threes off the dribble. Half of his field goal attempts are threes and he’s shooting 35% from long range this year, down from 42% a year ago. Andre attempts just 17% of his field goals at the rim and struggles with his two-point jumper (28.8%). He’s streaky but more than capable of taking over a game.

Andre’s (unrelated) backcourt mate Austin is a taller guard at 6-foot-4 and he’s emerged as a rebounding threat in his final season. Hollins is effective on both backboards and grabs over seven rebounds per game, up from three per game a season ago. Hollins will even spend some time at the power forward position, something that could be likely against Michigan’s undersized frontcourt.

Morehead State transfer Deandre Mathieu has added a new element to the Golden Gopher backcourt. The 5-foot-9 guard is jet-quick and is the best setup man and steal man on the Minnesota roster. Despite his slender size, Mathieu takes nearly half of his shots at the rim and connects at a 65% rate – strong evidence of his ability to drive and slash to the basket.

Malik Smith transferred from Florida International with Pitino and was granted immediate eligibility. The 6-foot-2 senior is primarily a three point shooter with 69% of his field goals coming from long range where he shoots 38%.

Trevor Mbakwe and Rodney Williams are finally gone so Minnesota has a much different frontcourt. 6-foot-8, 220 pound forward Oto Osenieks and 6-foot-11, 240 pound Elliott Eliason start in the frontcourt with Maurice Walker and Joey King available off the bench. Minnesota’s big men all do one or two things pretty well but are predominantly complementary players.

Walker dropped 49 pounds but still stands 6-foot-10, 250 pounds, and is a foul magnet on the block. Eliason is a good shot blocker and Minnesota’s best rebounder while King’s defensive rebounding numbers are below average. Osenieks is a good slasher  (56% on twos) but shoots just 29% (7-of-24) on threes at the four spot.

Ken Pomeroy’s metrics predict a 70-68 Minnesota victory but give the Wolverines a 42% chance at the road upset. Michigan has a great opportunity to steal a road win and could get off to a strong start in the Big Ten with games against Northwestern, at Nebraska and versus Penn State coming up.