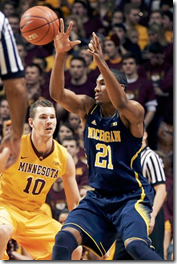 The Gophers had a new coach but the result was the same. Michigan won at Minnesota for the fifth time in a row. The Wolverines stole a 63-60 victory in their Big Ten opener despite Glenn Robinson III leaving the game with an ankle injury early in the second half.

With Robinson on the sidelines and Mitch McGary in a suit, it was ‘next man up’ for the Wolverines. Jon Horford tallied 14 points and nine rebounds while Zak Irvin knocked down five three-pointers off the bench.

But down the stretch it was Nik Stauskas who made the critical plays to finally pull the Wolverines ahead in a game that saw nine ties and ten lead changes. With 5:53 to play and the game tied 49-49, Stauskas took over. He handed out three assists and slammed home a back-door dunk in a seven possession stretch that secured the final Wolverine lead.

There were some late-game jitters and tense moments in the final minute of play but Michigan held on. DeAndre Mathieu’s open, but desperate, final three-point heave banked harmlessly off the glass as the final horn sounded and the Wolverines moved to 1-0 in the Big Ten.

There was a lot of talk before the game that this was a different Minnesota team under first-year head coach Richard Pitino but the box score looks eerily similar to Michigan-Minnesota games of late. The Gophers dominated the offensive glass but turned the ball over too often to win the game.

Michigan’s offense managed 1.04 points per possession – far from impressive but just enough to win. The Wolverines shot well from outside – 7-of-17 with five of the makes from Zak Irvin – and were okay inside the arc – 48% on two-point attempts. Michigan had four turnovers in the first six minutes, but only gave the ball away six times in the final 34 minutes. Michigan’s offensive rebounding progressed in the opposite direction. After grabbing five offensive rebounds in the first half, the Wolverines failed to grab an offensive board in the second. Michigan’s ability to get to the free throw line was critical. Eight of Michigan’s 22 free throw attempts came in late-game scenarios but the Wolverines were aggressive attacking the basket and were rewarded with some freebies.

This wasn’t a great defensive effort. Michigan made two critical stops down the stretch but has major issues to fix on the defensive end. Minnesota dominated the offensive glass, rebounding 44% of its misses for 11 second chance points, but that wasn’t even Michigan’s biggest problem. The Wolverines simply couldn’t keep Minnesota’s guards out of the lane.

DeAndre Mathieu, Andre Hollins and Austin Hollins had brutal shooting nights – 7-of-29 combined from the floor – but gave Michigan fits with their ability to penetrate the lane and drop off easy passes to Elliot Eliason and Maurice Walker. Jon Horford was constantly drawn away from the basket to provide help, leaving Minnesota’s big men open for layups or putbacks at the rim. Minnesota’s guards are good, but this is an issue that’s going to plague the Wolverines against most Big Ten foes if they can’t improve their perimeter defense dramatically.

John Beilein called two beautiful sets out of timeouts (one was after a free throw dead ball timeout) which resulted in dunks for Nik Stauskas and Jon Horford. Those two possessions were critical and Beilein deserves plenty of credit for those possessions. But after it appeared that Michigan had secured the game, things went a bit awry. Michigan had a defensive breakdown to give up an open three and then called a timeout with Stauskas on the line to put Michigan up three and four seconds to play when Minnesota was out of timeouts. The Gophers got a great shot for DeAndre Mathieu after the Stauskas free throw and that was disappointing considering how many times Michigan has been burned by those type of plays in recent years. Beilein has never been for fouling up three in the final seconds (citing the concern of fouling the three-point shooter) but this was yet another close call.

It wasn’t always pretty but this was a pivotal win for the Wolverines – an especially impressive win considering that Glenn Robinson III was sidelined for the second half. Michigan has three of the easiest games on its conference schedule coming up and could get off to a fast start which would provide a much needed confidence boost. Robinson’s health will be critical – Beilein offered no post-game update – because without him and McGary for any extended period of the time this team will be in real trouble.