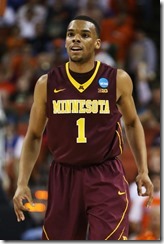 Jonathan Foster has been blogging about Minnesota basketball for years at From the Barn. We enlisted the Minnesota hoops expert to answer a few questions about the Gophers before tonight’s Big Ten opener. I also answered some questions about the game from a Michigan perspective over there.

For someone that hasn’t seen Richard Pitino’s teams play, what should we expect?

It is probably still a little too early to assign an identity to this season’s teams, but a few things have stuck out so far. The Gophers have a green light to shoot from anywhere. During the Tubby Smith years, players seemed afraid to shoot. Now, possessions are shorter and there are a lot more three-point attempts. There is more pressure defense, which doesn’t produce turnovers at the rate that it should, but it certainly speeds up the pace of the game. Finally, for the first time in a long time, the Gophers value the basketball. The baffling turnover problems on the offensive end are a thing of the past (for now) and the Gophers are finally forcing more turnovers than they lose.

How good is this team? The Gophers best win is over Florida State, same as Michigan’s, but their schedule looks fairly underwhelming. What are the expectations for Big Ten play?

I don’t think anyone knows how good this team is, or can be. The backcourt can be one of the best in the Big Ten when the Hollinses are hitting shots, but they are both a bit on the streaky side. If they can find more consistency they can compete with just about anyone.  The relatively weak front court play has the potential to lose as many games as the back court can win. As a whole, the Gophers are certainly capable of sneaking into the NCAA tournament with a 9-9 conference season. The real expectation of Gopher fans is that the team will get better as the season goes on, something that hasn’t happened around here in a long time.

John Beilein raved about DeAndre Mathieu… What does he bring to the table?

Dre Mathieu brings speed, speed, and more speed, along with an ability to take care of the basketball. He is the player that would have kept last season’s Gophers a top 10 team, but we are perfectly to have him now. In the last few weeks he is starting to look for his own shot too. Considering that he is the team’s most efficient offensive player, I wouldn’t be surprised to see him shoot more often.

Austin Hollins looks to be one of the most improved Minnesota players on paper, how has his game progressed?

What interior threats does Michigan have to worry about from the Gophers? Will they try to take advantage of Michigan’s smaller front line with Glenn Robinson III at the four and Mitch McGary sidelined?

If Michigan had to pick a BIg Ten team to play without McGary, it would probably be the Gophers. Elliot Elliason is a much better rim protector and rebounder since last season, but he isn’t much of a scoring threat. Oto Osenieks and Joey King have been playing power forward, but are really true small forwards playing out of position. However, the absence of McGary will likely neutralize what should have been a big advantage on the interior for Michigan. The game will ultimately be decided by guard play, something that the Gophers are not upset about at all.

Beilein’s teams had the upperhand on Tubby Smith’s teams for the most part, do you expect that to change?

I think so, only because Richard Pitino seems to understand, or at least gets his team to understand, the importance of taking care of the ball. Looking back at the Smith-Beilein match-ups, the Gophers usually did everything they needed to do win except taking care of the ball. The two teams have been evenly matched, but the few extra Michigan possessions were usually the deciding factor.

Minnesota beats Michigan on Thursday if it does these three things….