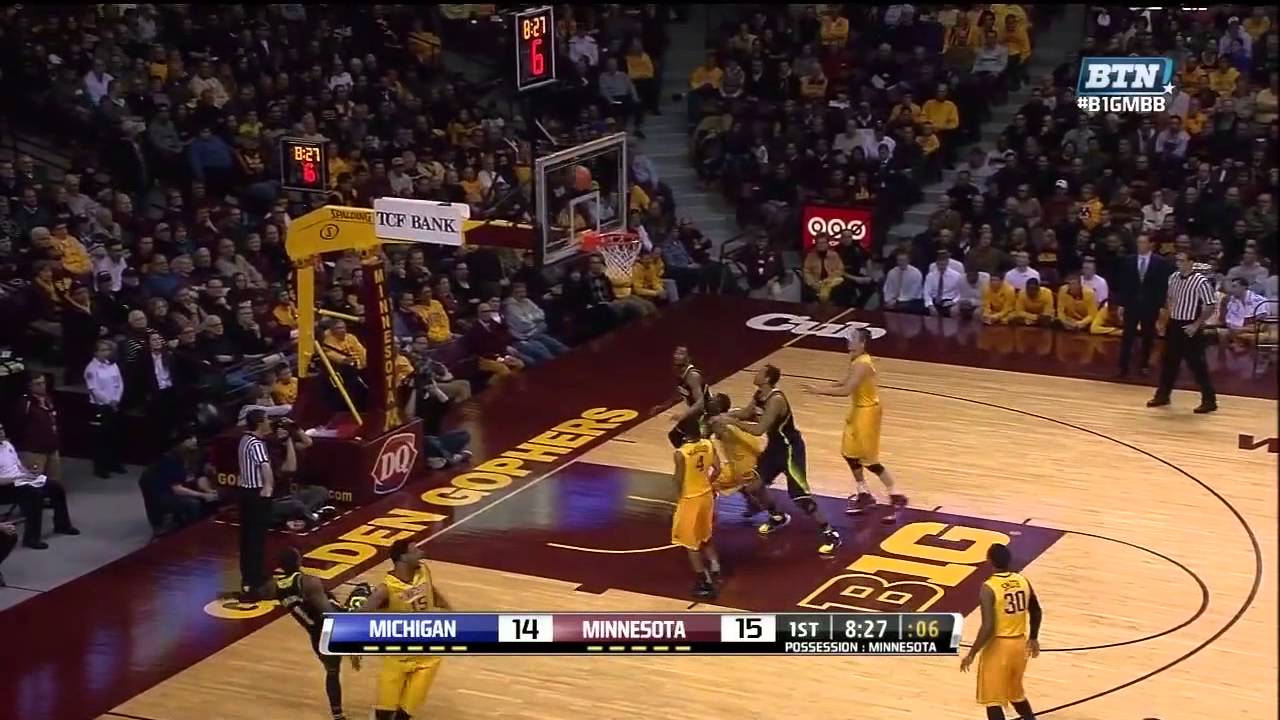 Michigan fell behind 15-7 early in the first half of its eventual 63-60 win over Minnesota on Thursday night. This was due in a large part to some perplexing turnovers and giving up offensive rebounds. 10 of Minnesota’s 15 points at that early juncture had come off offensive rebounds and steals. John Beilein was surprised by some of his team’s turnovers and praised Minnesota’s ability to hit the offensive glass, especially the big man Elliot Eliason.

“The first half, I think the tale of it is, they had 10 offensive rebounds, and we had five I think really uncharacteristic turnovers,” Beilein said during the post-game press conference. “We threw it to Spike (Albrecht) one time in the post. I mean, we threw it to him in the post. It was like, what are we doing? That gave them run-outs, that gave them opportunities. but the big fella can really hit the offensive boards and that really hurt us.”

However, once Michigan got back to taking care of the basketball and hitting the glass, the tenor of the game completely changed — this run was the result. It began with a simple drive to the basket by Caris LeVert off the high ball screen from Jordan Morgan. This was one of the few bright spots for LeVert, who played as though he’d left his game in Ann Arbor for much of the game. On the next play, Glenn Robinson gets a streaking lay-in after a timely double-team of Eliason in the post by LeVert and Jordan Morgan. Then, we see Spike Albrecht miss a contested but reasonable three, and then Jon Horford coming down with a tough offensive rebound. This was one of the few possessions that saw Minnesota play zone, and Michigan promptly shot its way out of it — after working the ball into the middle to Stauskas, the sophomore kicks it back out to Albrecht, who finds Zak Irvin for the triple. Later, after another offensive rebound by Horford, the big man makes a heads-up play passing the ball to Robinson cutting back door, who draws the foul. Finally, Stauskas just makes a tremendous individual effort to break down his defender in the paint and get the contested lay-in. By the close of this run, Michigan was in the driver’s seat with the momentum and up 18-15.

2) Jon Horford has a big first half

I feel like Five Key Plays hasn’t been very kind to Horford this season, so let’s give credit where credit is due: Horford had a phenomenal game, and not just in the first half. The big man came up with some big plays in the second half as well, including seven points in the last 5:20 of the game and a big free throw down the stretch. However, his first half stat line was absolutely Mitch McGary-esque: seven points (3-for-3), seven rebounds (two offensive), one block and one steal. John Beilein was effusive in his praise for Horford after the game:

“The young man, he eats right, he trains right, he’s in the gym all the time,” Beilein said. “I couldn’t be happier for any player that I’ve ever coached. To have him finally get out there and play, to have him not be looking over at the bench and not be looking at the official because he’s in foul trouble.”

On the first play of the above sequence, we see Spike Albrecht employing what can now be safely patented as a signature too-deep baseline drive and kicking out to Nik Stauskas. Stauskas pump fakes and takes one dribble before dumping the ball to Horford, who makes a decisive pivot and hits the soft hook in the lane. The defensive play that follows in the clip is just a tremendous one-on-one effort by Horford and really shows how much progress he’s made given that he stealthily avoids fouling. With his hands straight up and moving his feet, he completely bottles up Minnesota’s Maurice Walker — twice. Simply a great defensive possession for him. On the next play, Horford runs that highly effective drag screen with Stauskas on the secondary break and gets a wide-open dunk on the roll. Finally, we see that fadeaway jumper that Horford has worked so hard on. After faking to the basket and creating space, Horford pivots away and nails the shot.

3) Derrick Walton hits some big shots in the second half

Other players grabbed the headlines after this game, but Derrick Walton quietly had a solid game. The freshman didn’t score much (he was 1-for-4 from the field for seven points), but he made some nice plays and did other things. Walton finished with four rebounds, four assists and a steal, and he finished well in an area that has been a struggle at times, only registering one turnover. While his stat line doesn’t jump out, this was a positive game for Walton and something he can build on. John Beilein said as much after the game:

“I thought Derrick Walton grew up a lot today,” Beilein said. “I mean, just being in this game, having a player with two years of college experience all over him. He did a really wonderful job of just running our club.”

One stretch in particular was especially big for Michigan. In the second half, the Wolverines lost Glenn Robinson III to an ankle injury and the offense floundered. In what had been a close game throughout, Michigan found itself down six, 36-30. Then, Walton made some key plays to get the Wolverines back on track. First, he plays terrific one-on-one defense against the bigger, more experienced Andre Hollins, forcing the guard into a bad baseline fadeaway. This was Minnesota’s fourth shot on that offensive possession and felt like a pivotal chance to seize control of the game. On the ensuing offensive possession, Walton streaks downcourt and camps out on the wing. Nik Stauskas makes an excellent play by driving to the hoop and drawing the attention of Hollins before kicking out to Walton, who nails the 3-pointer (his first 3-point make since December 7th). On the next play, the myriad of switches and screens that necessitated Walton defending Elliot Eliason at the top of the key are tough to decipher. Caris LeVert starts the possession on the 6-foot-8 Oto Osenieks. LeVert and Spike Albrecht switch when Osenieks screens for Deandre Mathieu. Then, when Oseniek screens for Walton’s man, Hollins, Walton and Albrecht switch. This leaves Walton guarding Osenieks in the post, and you can clearly hear him yelling for help. Jon Horford obliges — but in a tragic twist of fate, Horford helps off of Eliason, who’s three inches taller than Osenieks. This leaves Walton on Eliason at the top of the key, but the freshman makes the most out of the situation by drawing the charge. Finally, we see one of John Beilein’s patented out-of-bounds plays under the basket, with Walton running through a double screen from Zak Irvin and Jon Horford before getting fouled on the shot. After hitting two free throws, Michigan was right back in the game with just a one-point deficit.

Andre Hollins, clearly peeved about his team’s defensive effort in the second half, talked after the game about how he felt like Minnesota let this one get away:

“The game definitely slipped away from us,” Hollins said. “We had some defensive lapses in the second half and we let one player from Michigan hit five three-point field goals.”

That “one player” was none other than Zak Irvin, who had one of his best games of the season. Irvin finished with 15 points on 5-of-8 shooting from long range and is becoming Michigan’s go-to 3-point specialist. The freshman didn’t appear rattled in the least in his first Big Ten game, instead coming up with the kinds of big shots in big moments you would expect from a veteran player. He kicks things off soon after the stretch from Derrick Walton we just saw with his first 3-pointer of the second half. It’s one of John Beilein’s absolutely favorite shots — the trailing three on the secondary break. Stauskas handed out one of his seven assists by dumping the ball to Irvin, who nails the wide open shot. The next two plays occurred back-to-back. First, Caris LeVert makes a nice read, using a ball screen from Jon Horford to drive and draw the attention of three Minnesota players, including Joey King, the player guarding Irvin. LeVert kicks to Irvin on the wing and the freshman knocks it down. On the next offensive play, Irvin is clearly feeling it. After playing a two-man game with Walton, the point guard kicks to Irvin after getting stopped on the baseline and Irvin knocks down the hotly-contested jumper for his fifth three of the night. That shot gave Michigan a two point lead, which they wouldn’t surrender the rest of the game.

5) Michigan runs great plays out of timeouts and gets stops

We took some liberties with this final “play,” but it’s worth it to see how much Michigan has grown in just the short period of time since they were losing these close games in Puerto Rico or against Arizona. It only takes good execution on a few plays late in games to completely alter their outcome, and this year’s Wolverines are learning how to win. Michigan ran some great plays coming out of timeouts, which is something Michigan fans have come to expect out of John Beilein. But they also got key defensive stops that they weren’t getting less than a month ago. This first play occurred out of a timeout. After Nik Stauskas displays his much-improved handle as a one-man press break, he camps out in the corner. Notice how Andre Hollins is playing Stauskas at around the 11-second mark — Hollins is over-playing him in order to deny him the ball, and the Gophers were doing this all night. Stauskas cuts back door and Caris LeVert finds him for the easy dunk.

I could watch the next play all day long. It was just perfect execution all around. Michigan has been running a lot of the action we see here with Horford. After receiving the ball, Horford gets an on-ball screen from LeVert before handing off the ball to Stauskas and screening for him. That bump LeVert provides serves to get Horford’s man off-balance before he rolls, and here it works like a charm. Stauskas gets his defender behind him, forcing Eliason to help. Then the sophomore makes a perfect, Trey Burke-esque dumpoff to Horford, who slams it home over three Gophers. This is what Michigan fans have been waiting for out of both Jordan Morgan and Horford — when you get the ball under the basket, just go up strong.

On the final defensive possessions of this sequence, the Wolverines didn’t just force missed shots — they got turnovers. These plays were just as important to securing the victory as the offensive plays the moment before. Michigan employed its usual policy of switching on almost everything, especially on off-ball screens, and helped on any drive to the basket. On both plays, there was simply nowhere to go for Deandre Mathieu inside — something that hadn’t been true for most of the night.