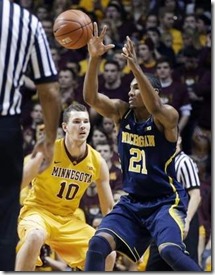 “Here’s what I like: I like that Zak Irvin didn’t stop shooting even though he couldn’t make a shot, because he hit a huge one for us late and in the first half.”

That was John Beilein after Michigan’s disappointing loss to Charlotte in the championship game of the Puerto Rico Tip-Off earlier this season. Saying Irvin “couldn’t make a shot” may have sounded harsh, but it was generally true: the freshman made only three of his 14 attempts from the floor in that game.

Even then, after a game that was a perpetual struggle for Irvin on both ends of the floor, Beilein stressed the need for him to keep shooting. At that early point in the season, Irvin’s light was already surprisingly green.

In his first Big Ten game, a 63-60 win in a hostile environment against Minnesota, Irvin proved why.

The freshman scored 15 points on 5-of-8 shooting from behind the 3-point line on Thursday. As Michigan’s season progresses and Nik Stauskas takes on an expanded role that calls for him to serve as more of a playmaker than last year, Irvin’s role has become clear: he is Michigan’s designated 3-point shooting specialist.

John Beilein sees Irvin as a “microwave” coming off the bench — a player who can enter a game and immediately heat up the offense. And while he may have exhibited some East Coast bias in not acknowledging the true “Microwave” — former Detroit Pistons guard Vinnie Johnson — Beilein expressed that general idea in his post-game comments.

“I don’t think my team knows who John Havlicek was but he was that guy who would come off the bench and hit a jumpshot in the middle of the night and that’s what Zak Irvin does for us,” Beilein said. “He just comes off and can make jumpshots.”

Comparing a freshman that has only played 13 college games to a 13 time NBA All-Star is obviously high praise but it’s clear that Michigan’s head coach has the utmost confidence in Irvin’s stroke. The 6-foot-6 wing didn’t just make shots — he made them when the Wolverines badly needed them. In the second half, Michigan lost Glenn Robinson III to an ankle injury. The sophomore’s absence seemed to hinder the flow of the offense for a while, and after falling down 36-30 to the Gophers, the Wolverines were reeling.

After some timely buckets from Derrick Walton, Irvin sank his first three of the second frame to pull Michigan to within one point. Later in the half, Irvin sank two long-range shots in a row to give the Wolverines a two-point lead. Michigan would hold that lead the remainder of the game.

When Irvin got hot, it was clear Michigan was running specific action for him. The Wolverines ran him through off-ball screens and played a two-man game with him and either Stauskas or Caris LeVert for a couple possessions.

Beilein, for one, had the utmost confidence in Irvin’s ability to come in and make plays with Robinson out.

“Zak Irvin has practiced for that opportunity,” Beilein said. “We rarely took him out after that. We lose some rebounds, we lose some experience, but Zak came in and made shots.”

With the extent of Robinson’s injury unknown at this point, it’s possible that Irvin could be more heavily-featured in the lineup. At least for one night, the freshman eased some of the trepidation that naturally comes with such a prospect.

But with every night like the one he just had, Irvin will attract more attention. Opposing teams will work to shut down his openings and tail him in a similar way to how they defended Stauskas in the Big Ten season last year. Stauskas saw his production dip during the conference season, and he was a far more prolific shooter in the non-conference than Irvin has been this year.

“I think the only part of the scouting that we missed was not paying more attention to Zak Irvin and his shooting ability,” Hollins said after the game. “We didn’t chase him off the line and he hit five three-pointers. He was a big difference for them and caused us to get on our heels a little bit.”

Irvin has come a long way from his dismal shooting night in Puerto Rico. In Michigan’s first Big Ten contest, he came up big and was a major reason the Wolverines escaped the Barn with a victory despite the loss of Robinson.