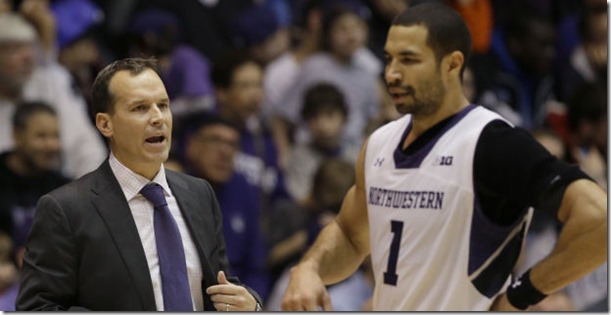 First year head coach Chris Collins opened up Big Ten play against Wisconsin earlier this week about the same way that his predecessor did a year ago against Michigan: a blowout home loss.  The Badgers throttled Northwestern, 76-49, at Welsh-Ryan Arena. The result might feel familiar to Michigan fans who watched the Wolverines trounce the Wildcats 94-66 in the conference opener.

The product on the floor looks a bit different stylistically under Collins but the end result hasn’t been any better. The Wildcats, 7-7, appear to be in for a long season and it’s a bad sign when a local blog is already asking if the Wildcats will win another game this season.

A home game against a struggling opponent is something that Michigan will welcome with open arms as Mitch McGary is sidelined indefinitely (back surgery scheduled for Tuesday) and Glenn Robinson III’s status is in doubt after an ankle injury at Minnesota on Thursday.

Bill Carmody’s Princeton offense is gone and all that’s left in its place is a worse offense. While 2013 wasn’t Carmody’s best offensive season, the 2014 Wildcat offense is currently ranked 261st in adjusted offensive efficiency – well worse than any Northwestern offense since 2003.

Northwestern isn’t a good shooting team – 46.9% on twos, 32.2% on threes, 47.5 eFG% – and doesn’t do anything else particularly well to make up for it. The Wildcats still don’t turn it over often (their 17.2% turnover rate ranks 96th nationally) but they are an offensive rebounding averse group, rebounding just 25.8% of their misses (317th nationally). The one thing Collins’ group has done a better job of this year is getting to the free throw line – the Wildcats attempt 40.6 free throws per 100 field goal attempts –  but that may be a product of scheduling as they attempted just 11 free throws in their first Big Ten game.

Northwestern has improved defensively, but most high-major foes have still scored the ball effectively. Stanford racked up 1.09 PPP in a 13 point win while NC State, Missouri, Wisconsin and UCLA were all far more efficient in easy blowouts. The list of teams that Northwestern has held under a point per trip is highlighted by DePaul, Illinois State and a host of mid- and low-majors.

Northwestern does a good job of defending the three. Wildcat opponents attempt just 27.4% of their field goals from long range (42nd) and connect at just a 30.1% rate (49th). That three-point defense combined with adequate two-point defense, 45.9% 2-point field goal percentage allowed (98th), yields an above average shooting defense with an allowed effective field goal percentage of 45.7% (64th). That’s not the only defensive improvement under Collins, Northwestern is also a significantly better defensive rebounding team.  The Wildcats are the 51st best defensive rebounding team in the nation, allowing opponents to rebound just 28.2% of their missed shots on the season. Northwestern fouls a bit too often and forces very few turnovers but this appears to be an improved defensive group.

Drew Crawford is back after missing last season with a shoulder injury. The fifth-year senior leads the Wildcats in scoring and rebounding with 15.9 points and 7.7 rebounds per game. While Crawford has dramatically improved his rebounding, by necessity, his offensive game has regressed somewhat. He’s shooting just 44% on twos, well below his previous career average of 51%, but is still a capable three-point shooter at 39%.

JerShon Cobb and Tre Demps are the other two Wildcats to average double figures. Cobb missed last season with a suspension and has failed to improve on his efficiency during his tenure at Northwestern. He has an offensive rating of 99, shoots 42% on twos and 38% on threes.  Demps is a 6-foot-2 sixth man sixth man that shoots 43% on twos, 38% on threes but draws over five fouls per game.

Junior guard Dave Sobolewski has started at point guard for Northwestern since he stepped on campus but his numbers have regressed in his junior season. Sobolewski is averaging 7.6 points and 3.2 assists per game. His assists, scoring and shooting are all down while his turnover numbers are up. He’s shooting just 39% on twos and 19% on threes this season and hasn’t reached double digits since November 25th against Gardner Webb.

Alex Olah only averages nine points per game but the 7-foot, 265 pound center is capable of a big performance. Case in point, he had 23 points on 10-of-14 shooting against Wisconsin while his teammates only managed 26 combined. Olah shoots 58% on twos and is a top-10 shot blocker in the Big Ten. Olah’s only backup at the five spot is Nikola Cerina, a 6-foot-9 senior that is 3-of-9 from the floor this season with 10 turnovers.

Northwestern doesn’t have a true power forward as freshman wing Sanjay Lumpkin, a low usage but efficient scorer and above-average rebounder, starts alongside Crawford in the frontcourt. Nathan Taphorn and Kale Abrahamson will provide bench minutes on the wings, both players attempt three times as many 3-pointers as 2-pointers.

According to Ken Pomeroy’s metrics, this is Michigan’s easiest conference game of the season. Pomeroy projects a final score of 68-55, giving Northwestern just a seven percent chance at upsetting the Wolverines.