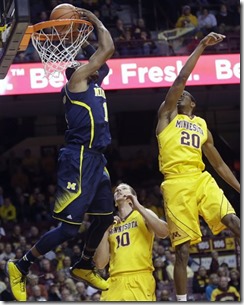 Beilein was his typical cagey self when talking about Robinson’s injury. Robinson injured his ankle early in the second half of Michigan’s 63-60 victory over Minnesota on Thursday. The sophomore tested the ankle throughout the game but was ultimately deemed unfit to play.

“I can’t give you much of an update. He had rehab all day yesterday. We’ll know more tomorrow, but we really don’t know right now,” Beilein said. “We’ll know more. I’m not sure. We’ll have to just wait and see. We’d love to see him out on the court tomorrow. You and I and everyone else can find out tomorrow.”

When asked if Robinson could safely be called a game-time decision, Beilein responded in the affirmative.

“Yeah. Tomorrow’s the game day, yep,” Beilein said. “You and I and everybody will know tomorrow.”

Against Minnesota, Robinson’s injury meant far more playing time for Zak Irvin than the freshman is used to. Irvin played 27 minutes against the Gophers. He logged 26 when Glenn Robinson III went down against Charlotte and then another 26 the next game against Coppin State – when Nik Stauskas sat out – but he averages just 17 minutes per game.

Beilein said there are essentially two options if Robinson is forced to miss Michigan’s matchup with Northwestern: either go with more minutes for Irvin or put Jordan Morgan at the four position.

“The other day, we used Zak Irvin in there for most of the game. But at the same time, Jordan Morgan can play the right-side wing if we need him to as well,” Beilein said. “I guess those are our only options right now. I guess we’re down to eight scholarship players if he cannot play. Our bench gets shorter, but more people get a chance to play.”

In his first two games of the Big Ten season, John Beilein will be going head-to-head with the conference’s two brand-new head coaching hires: Richard Pitino at Minnesota and Chris Collins at Northwestern.

Beilein said there are advantages and disadvantages to the situation, but it’s definitely different in a conference that is known for its long-tenured coaches.

“I thought of that the other day, that we’re the only team that’s opening up with back-to-back new coaches,” Beilein said. “You’re almost like the non-conference schedule, someone you didn’t play. At least we know some of the personnel — that’s the only advantage probably. But then you turn around as well and say, okay, he and his staff have not scouted Michigan before. But it is different.”

One of those players Michigan is already very familiar with for Northwestern is Drew Crawford, a redshirt senior guard. Beilein mentioned him when he talked about preparing for the Wildcats.

“I see that as they get going in the Big Ten right here, they’ve been in virtually every game except the Wisconsin game,” Beilein said. “As you know, Wisconsin has a way of doing that to us and to just about every other program, it seems. With (Drew) Crawford being back, (Dave) Sobolewski just played so many minutes. They’ve got some good young talent on the team. Just like we saw with the Minnesota game and every game, every team is going to have to play every minute of every game.”

In 30 minutes of playing time against Minnesota, Michigan’s freshman starting point guard scored seven points, grabbed four rebounds and four assists to only one turnover and notched a steal. While Walton’s scoring numbers don’t stand out, his overall performance was encouraging in light of his recent struggles.

Beilein said Walton is progressing and noted some of the positives from his game on Thursday.

Beilein’s offense can be complex, especially for a freshman point guard. Not everyone is Trey Burke and the Michigan head coach expects those growing pains.

“He’s growing and he’s understanding that there are certain angles to our offense that he may not completely understand and angles to defense as well. He’s learning those on the fly. We’re really blessed that he has such a high IQ. You can’t get an A on the first test every time but his grades are growing every single time.”

As far as what Walton still needs to work on, Beilein cited his decision-making going to the hoop. Walton has converted 85% of his field goals at the rim but those his turnover rate (24.4%) is higher and his assist rate (20.1%) is lower than what John Beilein would like to see.

“Our thing is, draw two see four — draw two defenders, see your four teammates,” Beilein said. “He took a couple with two guys on him that he probably doesn’t need to take, that he needs to find other people in those situations. He’s learning all these things. It has a lot to do with dribble management, lending on two, being able to pivot and find who’s there. It’s all things we’re going to work on endlessly over the next four years with him.”