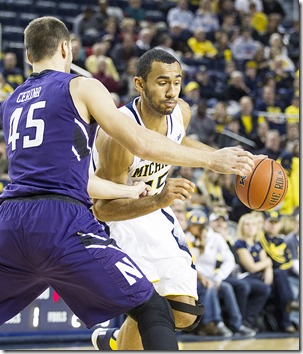 It took Michigan a while to wake up in front of a sparse Crisler Center crowd on a snowy Sunday afternoon, but eventually the Wolverines dispatched Northwestern comfortably in a 74-51 point win. Michigan took control of the game after allowing the Wildcats to hang around about 25 minutes, and earned its second Big Ten victory of the season.

While Michigan’s offense will grab the headlines after scoring 74 points in 61 possessions, second half defensive adjustments were what enabled the Wolverines to pull away down the stretch.  Leading by just six points with 14 minutes to play, Michigan broke the game open with a 12-2 run. The run was powered by defense as Michigan earned five stops in a row and seven stops out of eight possessions. The Wolverines would never look back, stretching their lead to as many as 26 points in the easy victory.

There aren’t many surprises in Michigan’s offensive statistics. The Wolverines shot 63% on twos, 33% on threes for a 58% effective field goal percentage and didn’t turn the ball over often. For the second league game in a row, Michigan made hay at the free throw line. The Wolverines made 18-of-22 free throws to just 48 field goal attempts and outscored Northwestern 18-7 at the stripe. Michigan only rebounded 29% of its misses and managed just two second chance points. The Wolverines ran a lot of offense through Nik Stauskas but there wasn’t much secret to their success, they just had significantly more talent.

Northwestern’s lack of scoring ability has become painfully obviously without the Princeton offense. Drew Crawford carried the Wildcats in the first half but Michigan did a great job adjusting to him in the second. After scoring 13 points in the first, Crawford didn’t score in the second half until he hit a free throw with 5:19 to play. Northwestern only had four offensive rebounds in the game: two were on the same possession and one was immediately whistled a travel. Dominating Northwestern on the glass isn’t anything to puff your chest out about but Michigan did its job. The Wolverines also forced the Wildcats into 12 turnovers and turned them into 16 points.

It wasn’t a glamorous victory, especially throughout the first half, but Michigan took care of business with a routine home victory. Michigan outscored the Wildcats by .38 points per trip and sits at 2-0 in league play. The Wolverines have another manageable week coming up with a winnable road game in Lincoln, Nebraska on the docket.