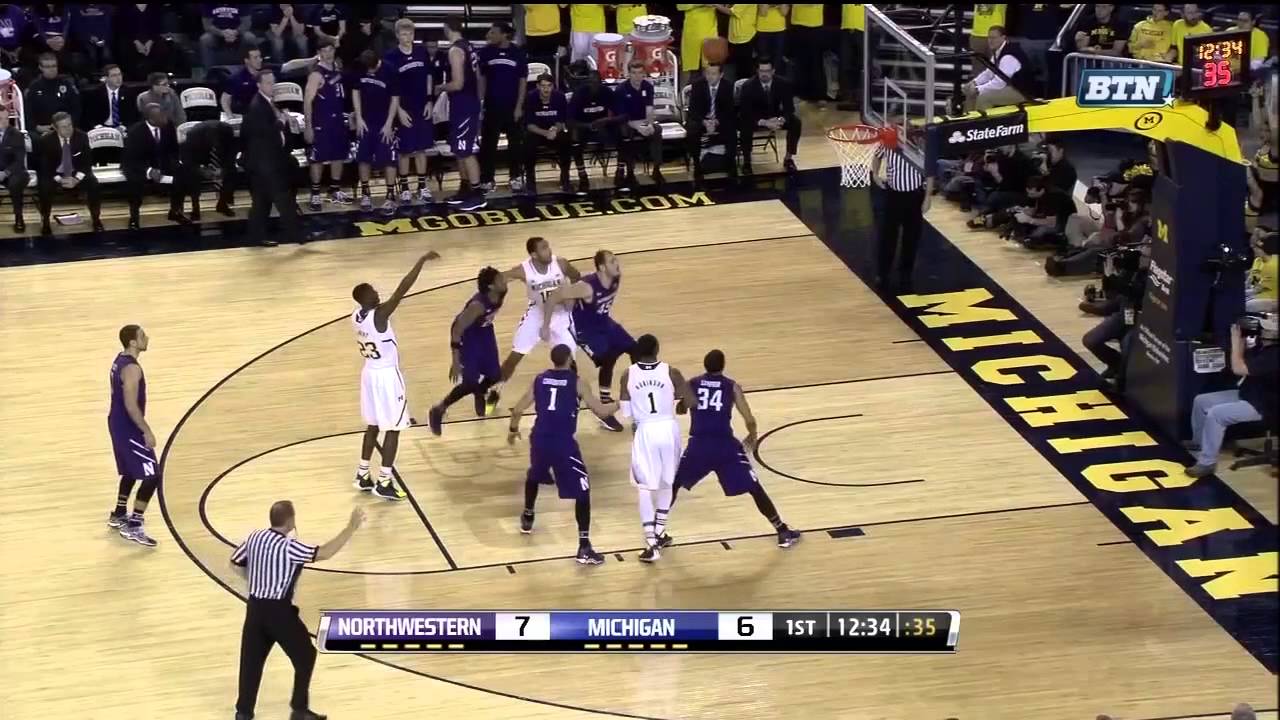 There was a sense from the start that Michigan wouldn’t have much trouble with Northwestern. But in the first half, the Wildcats kept it relatively close and the Wolverines needed all the points they could get. One way they jump-started their offense was through the fast break, using their superior speed and athleticism to jump Northwestern’s passing lanes and sprint out for easy layups. In the clip above, the first play features Derrick Walton, who continued his steady improvement evident in Michigan’s win over Minnesota on Thursday. Jordan Morgan knocks the ball away from Alex Olah, who is receiving an entry pass from Dave Sobolewski. Walton scoops up the loose ball and shows terrific aggressiveness going to the rim, taking it coast-to-coast for the contested lay-in. John Beilein cited Walton looking for his own opportunities as something he liked.

“What I really like is he’s creating more for himself and doing it efficiently,” Beilein said after the game on Sunday. “Sometimes, you can’t mistake activity for achievement. He was doing some things before that weren’t conducive to finding open men. At the same time, he’s picking his spots so he can score.”

On the next play, Glenn Robinson III comes down with the defensive rebound and finds Caris LeVert streaking down the sideline and with a step behind the defense. Northwestern can’t recover in time and LeVert is fouled. Robinson makes another play by jumping Jershon Cobb’s passing lane after Cobb is double-teamed by Jon Horford providing Walton with help guarding the post-up. The sophomore takes it all the way and finishes at the rim. Finally, we see Spike Albrecht jumping the same lane as Robinson did on the play before. On the break, Albrecht makes a slick behind-the-back pass to Nik Stauskas, who slams it home.

2) Jordan Morgan does work in the first half

Michigan’s two-headed monster at center had itself another good game. Jon Horford and Jordan Morgan combined for 15 points and 16 rebounds, and both look to be playing with confidence and poise. That being said, it was Morgan who owned the first half. He played 11 of his 18 minutes in the opening frame and scored six points while grabbing all of his eight rebounds. In the first play of this sequence, Morgan runs a high ball screen for Stauskas. Morgan rolls and completely loses Olah, his defender. Stauskas hits him late on the roll and Morgan makes the easy layup. Later, Morgan grabs a strong defensive rebound and makes an outlet to Caris LeVert. Robinson receives the ball on the wing and drives to the hoop, taking off without really knowing where he’s going with the ball. Morgan cuts down the middle of the lane and Robinson passes to him but Morgan is covered and the ball is knocked away. Morgan dives on the floor and gets the ball back out to LeVert, who hits Robinson for a layup. That play is a great example of the leadership and sacrifice that has come to embody Morgan’s game. On the next play, Olah tries to back down Morgan but Morgan holds fast, forcing the big man into a bad shot. Morgan corralls the defensive rebound and pushes the ball, making an ill-advised pass to Stauskas cross-court. Later in the possession, Morgan slips a screen after handing the ball off to Stauskas. Stauskas gets him the ball as he’s rolling, but it’s well-defended by Olah. Morgan stops, turns and hits a baby hook over Olah, a move we’ve seen before this season. Finally, LeVert hits Morgan sprinting downcourt for a layup. Morgan said after the game that although there isn’t a specific number the big men shoot for as far as points and rebounds, their production on Sunday seemed like a solid benchmark.

“15 and 15 is a great number to strive for between the two of us,” Morgan said. “It was obviously good tonight but we’re just trying to keep getting better and better. There’s nothing etched on the wall or anything like that, though.”

3) Wolverines get aggressive going to the basket in the second half, end up in the bonus early

While this may not be the most exciting clip in the world, it was key. Michigan was in the bonus for the better part of the second half, after Derrick Walton got fouled going to the rim with 11:10 left to play and Michigan up 10. From that point, the Wolverines were shooting free throws. Free-throw shooting was a major reason Michigan ran away with this one — the Wolverines shot 22 free throws to 48 field goal attempts and hit 18 of them. By contrast, Northwestern shot only eight free throws, hitting seven of them. John Beilein said being aggressive and getting to the line is something he and the coaching staff emphasizes. While earlier on, he attributed it partly to the rule changes, Michigan has been getting to the charity stripe at an impressive rate over their first two Big Ten games.

“We’re shooting 20 foul shots a game. That’s a good number for our team,” Beilein said. “I think that had a lot to do with the rule earlier, but we’re encouraging it. Believe me, we have our eye on that scoreboard the whole time, keeping them out of the bonus and getting us in the bonus and the double bonus. Because it changes your whole game plan and it may take a guy like Drew Crawford or Cobb out of there.”

Against Northwestern, Michigan’s leaders at the line were the two players featured in this clip: Derrick Walton and Nik Stauskas. Stauskas has shown increased aggressiveness all year long, with Walton coming on somewhat over the past few games. Both of them keeping up the aggressiveness and the free-throw shooting — the duo combined to shoot 11-for-14 on the night — will be crucial.

4) Glenn Robinson III rattles the rim in the second half

Not much to say here. Robinson’s ankle sure looked fine from this angle, although Beilein added after the game that the sophomore will be in rehab the rest of the season.

“It didn’t look like (it hurt) today, although I think it helped that (Robinson) hadn’t practiced in a couple days,” Beilein said. “He was probably landing gingerly on it at times. I think if he could go up and land, but I think he was just a little bit off. He’ll be in rehab now for the rest of the year though. Once you sprain one, you’re in there for a long time. Both in weight training and ankle exercises in the training room.”

The first play in this sequence is a good example of something Michigan did very well, which was lock up in the second half. The Wolverines forced 12 turnovers total for the game and this one Zak Irvin forces simply by keeping his hands active and robbing JerShon Cobb. The freshman gets the ball to Robinson downcourt for the alley-oop. Next, Caris LeVert makes an important, though understated, play by knocking the offensive rebound out of Alex Olah’s hands and pushing the ball upcourt. Nik Stauskas finds Robinson again for the dunk on the other end.

The Wildcats briefly implemented a zone defense late in the game on Sunday. Let’s just say it needs work. Michigan picked it apart pretty easily on this play with great ball movement, patience and vision. It looks like a trapping 1-3-1 zone similar to what Beilein runs on occasion. Michigan recognizes it and moves the ball along the perimeter with quick passes down to Nik Stauskas in the corner and back up to Caris LeVert, who penetrates to the free-throw line using the dribble. By faking to Albrecht, LeVert is able to knife through the Cobb-Crawford trap at the 3-point line as Crawford recovers from trapping Stauskas. As the defense converges, LeVert kicks out to Albrecht, who passes it back to reset the offense. I’m not sure if Albrecht was eyeing Horford cutting baseline the first time he received the ball, but it sure looked as though he saw something he liked and was testing the defense a bit to make sure he got what he wanted. Again, speculation, but I wouldn’t put it past him. Seeing the Sobolewski was the man guarding the low post/baseline area, Albrecht fakes the dribble-drive and lobs the ball to Horford, who makes the layup. It was a good offensive possession for Michigan against a team playing not-so-good defense — an apt microcosm of the entire game. John Beilein acknowledged Albrecht’s passing prowess after the game but said the guard still needs to work on his defense.

“In the first half and in the second half, he just sees people that very few people see. Only the best point guards,” Beilein said. “He really makes our team better when he’s out there. The thing we’ve challenged him with is, with his size, he has to be an incredible defender. He can’t just be a regular defender. He’s got to really buy into, this is what I do to help my team. Not just passing. He’s answering both of those. He did tonight.”