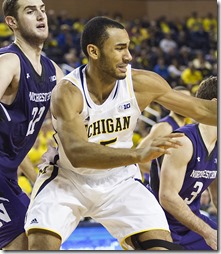 When news broke that Mitch McGary would be having back surgery and was out indefinitely, it sent a groan through the Michigan fan base. The Wolverines would likely be without their All-American center for the rest of the season. Panic didn’t set in, but the news meant a much more difficult road to success for this year’s team.

But so far, through the first two Big Ten games, Mitch McGary’s replacements have had a huge hand in Michigan’s two conference victories. Jon Horford and Jordan Morgan, splitting time at the five position, have been exactly what they need to be for this team: solid, reliable leaders.

Over Michigan’s first two games of the Big Ten season, the two centers are combining for averages of 16 points and 13.5 rebounds. That would be terrific statistical production from any one center — even for a guy like McGary.

But John Beilein said after Sunday’s 74-51 win over Northwestern that Horford and Morgan provide more than just post production — it’s their experience that truly sets them apart and makes them integral assets to a young Michigan team.

“We won a Big Ten championship with those two,” Beilein said. “Those two played most of the minutes on a team that ended up having a pretty good year. They just are now just getting back to a rhythm where they’re not looking over their shoulder. It’s good. I think they’re in a good place. When we didn’t guard Drew Crawford the first couple of times, no one else on the team has ever seen him play. Everybody else wasn’t here two years ago. We had to convince everyone that the kid can really play. You can’t just stand there and watch him shoot. Jordan and Jon have the experience that we really need out there.”

Michigan’s center duo is an amalgam of two players with differing styles. Morgan is cerebral, playing defense with his head and directing traffic on the court. He is also mainly a catch-and-finish player on offense. Horford tends to play with abandon, flying all over the court for blocks on defense, sometimes at the expense of rebounds. He also has a more advanced offensive game than Morgan, as evidenced by Beilein’s comfort level with posting Horford up in isolation situations on the block.

What stands out about the two elder statesmen is their improvement. For most players playing in their fourth or fifth year in the same system, it’s safe to assume they have reached their ceilings in that time. Both Horford and Morgan have demonstrated obvious improvement offensively. Morgan has shown off an impressive hook shot in each of the past two games, while Horford has displayed everything from a midrange jumper to a nice jump-stop move in the post to improved elevation and aggressiveness.

That being said, both players know their primary responsibility: play solid defense, get rebounds and finish at the rim. In that respect, both have been doing that better than they ever have. Northwestern coach Chris Collins commented on the effectiveness of Michigan’s center duo after the game on Sunday.

“(Morgan and Horford) do a great job. They’re veteran guys, so they’ve been in the system now for four and five years and they’ve played in a lot of big games,” Collins said. “They know what they’re supposed to do. They do a lot of dirty work. They kind of have a two-headed monster now at that spot. They split time. You look at the combination — eight and eight, seven and eight. So out of that spot, they give you 15 points and 16 rebounds. That’s pretty good production.”

Collins was impressed with how that production fills in the gaps of Michigan’s regular offense. Morgan and Horford don’t need Michigan to do anything special, they just find places to produce within the scheme of the offense.

“They don’t run any plays for those guys,” Collins explained. “They just play off penetration, they get to their spots, they catch and finish, and they give them good defense, rebounding and toughness.”

With McGary taking up most of the minutes from the latter half of last season through the first part of this one, an issue for the bigs has been making sure they are in good enough game shape to play the minutes that will be demanded of them. Beilein said during his press conference that it’s not so much production on the court that determines whether or not one of them is replaced with the other but the onset of fatigue.

Morgan echoed that sentiment after the game, but added he’s getting back into the shape he was in as a sophomore and junior, when he was playing more significant minutes.

“Maybe just a little bit (out of shape), just my wind kind of,” Morgan said. “It’s not that bad. We were in great shape coming into this season. To be honest I felt better today than I did a couple days ago and it’s only going to get better as I push myself through practices and games.”

Above everything else, Horford and Morgan have provided steadfast leadership in a season that has already experienced its shares of ups and downs. After the close win over Minnesota on Thursday, Horford was asked about one of his best games he’s ever played in a Michigan uniform. The redshirt junior scored 14 points and pulled down nine rebounds. This is what he had to say about his production:

“Honestly, I don’t think about it,” Horford said. “I just think about what I have to do for the team. I know defense and rebounding are going to be crucial to our success down the stretch, so that’s what I’m thinking. Offensively, I’m just playing off my teammates. We have so many weapons. I’m going to get open just because teams are so worried about these guys scoring.”