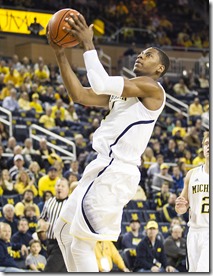 John Beilein joined the rest of the Big Ten coaches on the conference’s weekly teleconference on Monday morning. You can read notes and quotes from the full interview below. (Photo: Scott Mapes)

Opening statement: “We’re thrilled that we were able to start out in this conference with a 2-0 record. We know that the early-season victories are important, although they don’t define your season. We’re glad we could get out of the gate at 2-0, and now we go on the road again, play a late, late game at Nebraska on Thursday. We’ve got to do everything we can to answer a challenge again. Love the way our team responded yesterday to the success we had at Minnesota with a win — responding to success is sometimes more difficult than responding to adversity. So I love the way we came out yesterday and played against Northwestern.”