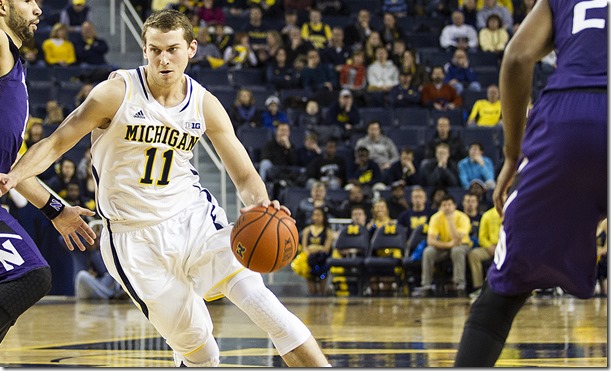 Our weekly feature tracking the performance of Michigan players performance over two game segments of the season. (Photo: Scott Mapes) Form Tracker is now interactive. Readers can vote on each player’s rating by hitting ‘Too low,’ ‘Too high’ or ‘Agree.’


Nik Stauskas continued his very impressive season over the course of Michigan’s first two Big Ten games. Against Minnesota, the sophomore scored 14 points and handed out a career-high seven assists. Oh yeah, he also hit two clutch free throws late in the game to seal the win for the Wolverines. Continuing his trend of not-great shooting from long range against high-level opponents, Stauskas hit 2-of-3 from inside the arc while hitting only 1-of-4 from outside. Against Northwestern, Stauskas was good again, scoring 18 points on 50 percent shooting from the field to go along with four assists and three rebounds.


Jon Horford played perhaps his best game as a Wolverine against Minnesota, hitting six of his eight field goal attempts for 14 points along with pulling down nine rebounds. The redshirt junior came up big in Michigan’s first Big Ten game and as a result dominated the minutes at center — his 30 minutes played at the Barn was his highest total of the season. Back at the Crisler Center against Northwestern, Horford was one half of a great performance by Michigan’s big man duo: seven points, eight rebounds, a steal, an assist and a block.


Michigan’s sharpshooting freshman is hitting his stride. Irvin had a huge game against Minnesota, scoring 15 points on 5-of-8 shooting from beyond the arc in 27 minutes standing in for an injured Glenn Robinson III. Irvin’s shooting numbers have been good, but against the Gophers he didn’t attempt a single two-point field goal. This is something John Beilein would like to see change, as the coach has mentioned on numerous occasions that he would like to see Irvin attack the basket and get to the line more. For now, though, he’ll take the hot shooting.


With more minutes, Jordan Morgan continues his return to form. The big man didn’t have a very effective game against Minnesota, as the coaching staff elected to ride Horford’s hot hand. But against Northwestern, Morgan provided some crucial help to an offense that didn’t play great in the first half. Morgan led the Wolverines in scoring with eight points in the opening frame and didn’t miss a field goal or free throw all game. He also pulled down eight rebounds, contributing to a dominant day for Michigan on the glass.


Michigan’s freshman point guard is steadily learning the college game. Over Michigan’s first two Big Ten contests, Walton has shown solid improvement and growing confidence. While it didn’t necessarily show in the scoring column against Minnesota, Walton had a solid game on the road — he scored seven points, handed out four assists to only one turnover and grabbed four rebounds in 30 minutes. Against the Wildcats, Walton had a stronger scoring night, hitting all three of his two-point field goal attempts for 11 points.

Robinson came back strong against Northwestern after only playing 20 minutes against Minnesota due to injury (though it’s worth mentioning that he did have four blocks against the Gophers). The sophomore looked fine jumping and cutting off his ankle on his way to 12 points. Robinson shot an impressive 6-of-8 from two but a disappointing 0-for-4 from long range, continuing a troubling trend of poor 3-point shooting that began with a 1-for-4 outing against Stanford.


Spike Albrecht is back to his zero-turnover self, not giving the ball up once over the last two games. Derrick Walton has continued to take the lion’s share of minutes at the point, but he and Albrecht shared the court quite a bit against Northwestern due to pressure. Albrecht was effective against the Wildcats, hitting his only shot attempt (a 3-pointer) and dishing out four assists to go along with two rebounds.


It’s been a rough start to the Big Ten season for LeVert. The sophomore didn’t have a good game against Minnesota, scoring only four points in 31 minutes on 2-of-7 shooting. He had three assists, but also accounted for four turnovers. Against Northwestern, he was better but still not good: seven points on mostly free throws, two assists and two rebounds in 30 minutes.