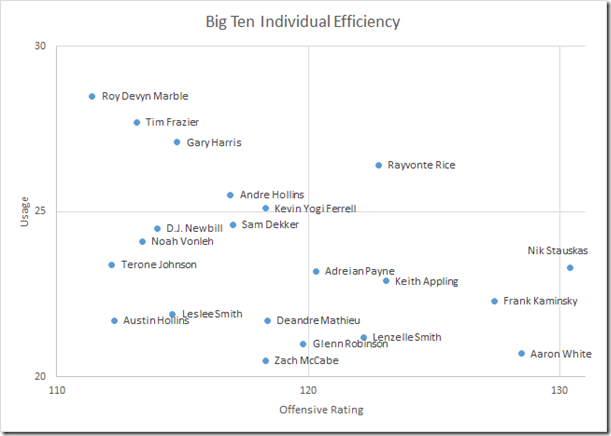 All anyone wants to talk about is Michigan’s early season losses, Mitch McGary’s back surgery or Glenn Robinson III’s up-and-down sophomore season. It’s time to talk about Nik Stauskas.

Michigan’s 6-foot-6 Canadian wing has emerged as one of the most efficient offensive players in the nation this year. He’s developed from a brilliant complementary player to an offensive star.

Unbridled efficiency is nothing new for Stauskas – last year his offensive rating of 122.8 was 36th best in the country among all players – but he’s accomplished the rare feat of maintaining, even improving, his efficiency while increasing his usage rate. Last season, Stauskas used 16.2% of Michigan’s offensive possessions. He was Michigan’s third option at best. Never the top man on the scouting report, and rarely the guy relied upon to make the offense click. He was essentially the most efficient role player in the country.

His usage rate has climbed to 23.3% in his sophomore season. While that’s not a Herculean usage rate like Trey Burke’s 29% a year ago, it’s still the highest on the team. Stauskas is unquestionably Michigan’s ‘go-to player’ and he’s done a good job of it. The beauty of Stauskas’s increased efficiency is that he’s drastically modified and improved his game. (Photo: Scott Mapes)

First off, let’s take a look at how Stauskas’s offensive efficiency compares to the rest of the conference. The following scatterplot shows all Big Ten players that use at least 20% of their team’s offensive possessions and have an offensive rating over 110.

The upper-right quadrant of the graph is the filled with the top-performers (high usage, high efficiency) in the conference. Right now that list includes Illinois’ Rayvonte Rice, and no one else. Rice has been terrific this year, especially if he can maintain this level of efficiency in league play.

The lower-right quadrant shows the more efficient but partially underutilized players. Stauskas falls in this quadrant, forcing the graph to be extended with his league-best offensive rating of 130.4.

The upper-left quadrant is filled with players that are over-utilized but under-efficient. The cut off for this list was high (high usage players like LaQuinton Ross, Drew Crawford, Ronnie Johnson, Bryson Scott, Terran Petteway and Tracy Abrams were excluded due to inefficiency) so this group isn’t bad per se, but it doesn’t quite stack up to the rest of the group. In the lower-left quadrant are the less efficient players with lower usage rates.

Stauskas’s efficiency is obvious in comparison to his peers. He’s using a fair number of possessions and is off-the-charts efficient, but the way that he’s reached these improved numbers might surprise you.

Nik Stauskas has always been known as a three-point shooter from his YouTube videos to his declarations to his NCAA tournament outbursts, but he isn’t having a great three-point shooting year.

He’s shooting 45.7% from long range, the third best percentage in the conference, but his 3-point numbers aren’t quite what they seem.

Stauskas is nearly unstoppable against bad teams, which don’t have the ability to stick to him, but he’s struggling to get and make open looks against good teams. 0-of-1 at Duke, 1-for-5 against Charlotte, 1-of-4 against Arizona, 2-of-7 against Charlotte. His best shooting performances against top-150 teams were 4-of-10 against Iowa State and 3-of-8 against Florida State.

He hasn’t shot the ball well in big games, yet he’s been Michigan’s best player. Even in big games.

While splits based on competition drastically affected Stauskas’s three-point shooting ability, his two-point numbers are shockingly steady. His consistency inside the arc is a major reason that his per-game scoring average was only two points (19 points vs. 17 points per game) lower against quality opponents.

Stauskas was exactly 50% on two-point field goals against both good and bad competition in non-conference play. He was 18-of-36 inside the arc against top-150 foes and 9-of-18 against sub-150 foes. Stauskas is 5-of-8 inside the arc through two Big Ten games.

While the 6-foot-6 Canadian was effective finishing last year (also at 50%), his distribution of shot attempts has shifted. Last year, 61% of his field goal attempts were from three-point range. This year, that ratio of three-point attempts is down to 53%. Stauskas is taking more twos and making them just as effectively.

Stauskas has thrown 19 assists in the four games since Mitch McGary has been sidelined indefinitely. He’s directly assisted 11 of Jordan Morgan and Jon Horford’s 24 field goals in those games. Mitch McGary was often criticized for being the product of Trey Burke but Stauskas is playing a similar role for Morgan and Horford thus far.

Stauskas’s assist rate of 20.3 isn’t earth shattering – it’s a couple points lower than Spike Albrecht and a point higher than Derrick Walton – but it’s vitally important because it has allowed Michigan to run its offense through Stauskas. Without a reliable 35 minute per game option at the point guard spot, Beilein has looked for alternative options to run the Wolverine offense and has leaned on more traditional elements of his two-guard offense.

So in a way, Stauskas is not only providing Michigan with a great wing scoring option, he’s helping alleviate major concerns at Michigan’s weakest positions: the five and the one.

Stauskas is a special offensive talent. His improvements might not be as dramatic as Caris LeVert emerging from bench player to solid starter, but they may be more impressive.

There are still major questions for Stauskas to answer. With McGary sidelined, Michigan is going to rely on Stauskas to win them big games. Thus far in his career, he hasn’t quite answered that call on the biggest stages.

His perimeter shooting struggles in big games this season were illustrated above and he’s still learning how to adjust to various defensive looks. Duke, Ohio State and others have been able to negate Stauskas from the game plan. Whether opponents opt to deny Stauskas the ball with a ‘no-catch defense’ or play a more compact and containing style, Stauskas will have to adjust his play.

“People are going to play him more as a shooter,” John Beilein explained. “And we love his shooting, but he’s got to get to foul line by driving, by getting 50-50 balls, by going after rebounds harder than he is right now. It’s all part of the process.”

That process is something that Stauskas has embraced since last April, when he stood teary-eyed in the bowels of the Georgia Dome after a disappointing weekend at the Final Four that featured as many made shots as turnovers: one. Stauskas stood in front of reporters and promised that he would be back in the gym the next day and that he’d improve his game over the summer. The process started over the summer when Stauskas stayed in Ann Arbor, not back home in Toronto and not with Team Canada basketball, and added 16 pounds of muscle to his frame.

The process continued in the non-conference season as Stauskas emerged as Michigan’s go-to player, something that was never a guarantee. But the is true test is yet to come. For Stauskas, the barometer of success will be his ability to lead Michigan in Big Ten play and beyond.