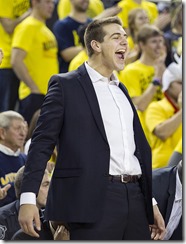 Mitch McGary had surgery on his back on Tuesday, and while Beilein didn’t say much about it, it sounds as though the procedure was a success. (Photo: Scott Mapes)

“Mitch is on his way back today and we expect him to be in classes tomorrow,” Beilein said during a press conference on Wednesday. “That’s all we know. Everything went well. That’s all I know.”

McGary’s rehab will be extensive, and it will likely keep him away from many team functions throughout the year. While the team practices, the sophomore will likely be in rehab. The same goes for road trips.

Beilein said that right now, McGary’s rehab is the big man’s most urgent business. If that means a curtailed travel schedule, so be it.

“We haven’t gotten the reports yet as all the doctors get together and think about the rehab. His rehab will be number one. Making a road trip will not be a priority,” Beilein said. “You think about the stress on your back when you’re sitting in planes. I don’t care how big a plane is, it’s a small plane to Mitch. So it’s important that we get him healthy. That’s our biggest thing. I’m sure he’ll attend some practices somewhere along the line, but I hope a good part of every practice he’s in doing rehab.”

While that is good news for the big man’s long-term health, it doesn’t change the fact that Michigan will be without McGary for most of the season, with the distinct possibility he will be out all year.

Nik Stauskas said that while the team will miss McGary’s production on the court, it’s his trademark energy that will be lacking in the locker room.

“Mitch is that guy you can hear in practice, no matter what we’re doing he’s always talking, always bringing energy,” Stauskas said. “Everyone loves Mitch. In the locker room and on the court, he’s just a great guy. He brings a positive energy. He makes us laugh when things aren’t going good.”

Zak Irvin is shooting lights-out thus far in his freshman season, hitting over 42 percent of his attempts from beyond the 3-point line. He was 5-for-8 on the road against Minnesota and played well in his first Big Ten game while replacing an injured Glenn Robinson III for a long stretch.

That being said, there’s is still progress to be made. Beilein stressed two areas where he would like to see improvement from the first-year player from Fishers, IN.

“The two strengths are the shooting and getting him to realize that the better his shot selection, the better shooter he’s going to be,” Beilein said. “At the same time, he’s sort of a green light guy. We have to get him to understand what is probably the best green light to go with. But he’s pretty green light with us.”

Irvin has almost predominantly been a three-point shooter this year. 66 of his 99 field goal attempts this season have been long range efforts and he’s only attempted eight free throws. Beilein would like to see him start to expand his game.

“And then defense, how he can be a better defender all around. The weaknesses we’re working on is how to be more efficient with your game,” Beilein explained. “You’ve got to get to the foul line. He’s not getting there at all. Those are the main things we’re working with him on. Those 50-50 balls, that’s something that we chart. His numbers are improving, but he’s got to get more.”

As a fellow shooter, Stauskas said he’s been counseling Irvin regarding when to make the extra pass and when to let it fly. The sophomore says it’s understandable that a player like Irvin coming out of high school needs to learn some restraint upon entering the college game.

“I think sometimes for a freshman it might be difficult to understand what a good shot is and what a bad shot is,” Stauskas said. “Just because, coming out of high school, everyone’s the man on their team and there are certain shots that they take in high school that would probably be a great shot for them but in this system maybe we want them to think about that shot and maybe pass it up.

“I think he’s been doing a good job and he’s been shooting the ball really well. Like coach said, we’re going to give him the green light and whenever he’s open we want him to shoot it. But at the same time, we want to make sure he’s making the right decisions out there.”

Jordan Morgan and Jon Horford have formed an impressive duo so far in the early going of Michigan’s Big Ten season. The pair is averaging 16 points and 13.5 rebounds combined over the first two games of the conference slate.

While they each bring to their own skill set to the game on the court, they work hard to operate as a cohesive unit. That means talking with each other about what they’re seeing from opposing defenses and leaning on each other at times.

For Morgan in particular, the rise in minutes comes after experiencing a steady marginalization of his role on the court for the Wolverines. Last March, his minutes dwindled as Mitch McGary got healthier.

Now, Morgan’s minutes are back up. The redshirt senior is taking it in stride.

“I kind of feel like I’ve been at every point with this team, from the highs to the lows,” Morgan said. “At this point, I just roll with it. Whichever situation you find yourself in, you just have to make the best of it.”