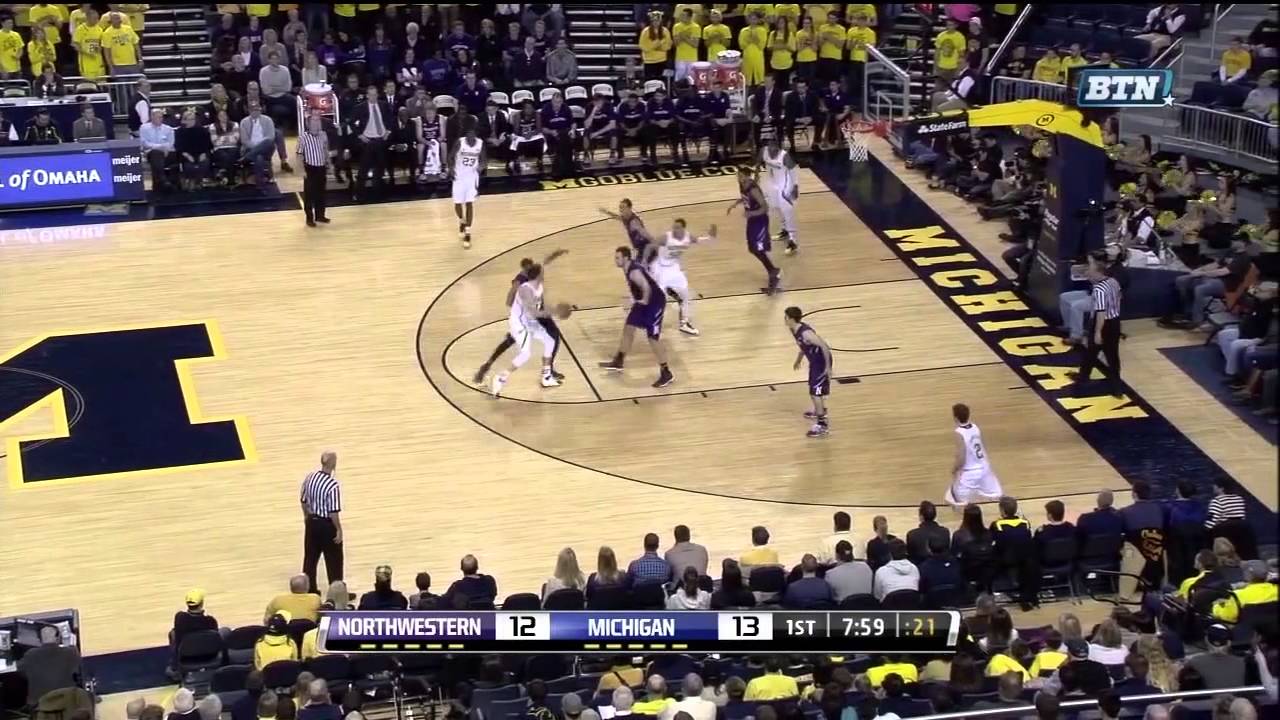 We’ve heard it at least once on almost every Michigan basketball broadcast: “Nik Stauskas isn’t just a shooter.” Even though it is almost always said in a way that implies the analyst is letting the viewer in on a little-known secret, Stauskas’s versatility has become so obvious that the statement now borders on the absurd.

The Mississauga, Ontario native has improved his game by leaps and bounds this season, as clearly evidenced by Dylan’s extensive statistical breakdown of Stauskas’s offensive production. In that post, Dylan outlined the statistical reasons behind the sophomore’s emergence as Michigan’s most lethal offensive weapon. Stauskas is the most-used Wolverine with a 23.3 percent usage rate, and his offensive rating of 130.4 is off-the-charts good.

Michigan’s recent blowout win against Northwestern actually provided us with solid video evidence for just how versatile Stauskas has become, and the comfort with which the coaches let him operate the offense. Below are a series of clips where Stauskas is featured as the ballhandler in the pick-and-roll, a set that’s run almost every time down the court, and the dribble-hand off. These clips illustrate not just how heavily Michigan leans on Stauskas to be an instigator on the offensive end, but also how many different ways Stauskas can beat opposing defenses.

Although he displayed his full arsenal of offensive abilities against Northwestern, Stauskas isn’t perfect. He started the game off with a turnover on Michigan’s first offensive possession of the game. John Beilein mentioned this play during his press conference on Wednesday and was impressed with how he adapted: “Against Northwestern, he started with a really bad turnover to start the game where he jumped in the air and tried to make a decision. He’s learning how to do the things better as he goes along.”

From that point on, Stauskas dominated the game offensively with an array of different ball screen and dribble handoff looks.

On this play, Stauskas is the focus of a traditional high ball screen. The sophomore makes a truly impressive read on this play. As Jordan Morgan rolls off the screen and Stauskas hesitates at the free throw line and watches Tre Demps help off Caris LeVert from the wing. He shows on Morgan, but quickly gets back to his man when Morgan’s defender, Alex Olah, is still focused on Stauskas. When Demps gets back, Morgan is finally freed up under the basket, and Stauskas finds him for the layup.

This illustrates a key component of Stauskas’ advantage running the pick-and-roll: his height. Not many point guards could see over the seven-foot Olah, let alone lob a pass over him. But being 6-foot-6 wing makes that play easier. Beilein loves the added dimension that Stauskas’ height beings to the play: “One thing that gives him a great advantage is that he sees over the top. At 6-6, a guard, he can see things that Spike and Derrick can’t see. He can make hook passes and he can go underneath. Darius Morris had that advantage as well.”

This is another classic high ball screen between Stauskas and Morgan. This time, though, Olah stays at home on Morgan for the most part. When Stauskas hesitates at the free throw line, he sees Morgan under the basket but covered. The hesitation by Stauskas allows Drew Crawford to recover somewhat from Morgan’s ball screen, and Stauskas finds himself effectively double-teamed. So, he makes an outstanding individual play with the spin move, losing both of his defenders and clearing the way for a nifty left-handed finger-roll. It’s usually plays like this one that surprise people who don’t often watch Stauskas play.

Here we go back to the dribble handoff, a look that Stauskas has been used in frequently – including the opening turnover of the game. With the absence of a bail-out option on the wing, isolating that portion of the court truly turns this play into a two-man game, with Stauskas and Morgan going against Demps and Olah. Early on in the play, before Morgan’s handoff to Stauskas, Stauskas fakes a back-door cut that sets Demps behind the eight ball from the beginning — one of the little things that makes this play work. With Morgan slipping the screen and Demps behind Stauskas, the sophomore is free to fit a one-handed bounce pass to the big man in stride. While Morgan opted for the hook rather than going straight up, it was the pass that got him the ball so deep and gave him enough space to shoot anyway.

That sort of passing ability is not something Stauskas has been known for at the college level, but coming out of high school his vision was consistently noted as a strength.

“Ever since I was young, I’ve been a guy who can see the floor pretty well and distribute the ball,” Stauskas said during Wednesday’s press conference. “But I think this year, just with the positions coach is putting me in and being a little more aggressive going to the basket, naturally I’m going to draw more double teams in the paint and I’m always willing to find the open man. Whether that’s our bigs underneath the basket or our shooters out on the perimeter, I’m always looking for whoever’s got a good look.”

There just aren’t many guys out there who can make this play. We go back to the basic dribble handoff set on the wing, this time with Jon Horford as the big handing the ball off to Stauskas. The sophomore does two things extremely well here. The first is fake the back cut hard. Beilein has said numerous times that he loves how hard his team cuts — this fake, because it’s done with purpose, sets Drew Crawford on his heels as Stauskas receives the ball and leaves the sharpshooter open. The second thing Stauskas does well, obviously, is bank the shot. Since he wasn’t able to square up and it still turning as he shoots, the smart play (and the one that’s almost never made) is the bank. Very impressive play from Stauskas here.

Despite the myriad of improvements Stauskas has made in other areas of his game, we end on what he does best: shoot the long ball. This ability is part of what makes him so lethal in the other areas — defenders have to respect the possibility that he will up and fire as he does on this play. Stauskas again fakes out his defender with the jab step, but receives the handoff from Morgan at the top of key. Stauskas elects to just shoot it and he fills it up.

So when will the point that Stauskas can do more than just shoot the ball be so obvious that it’s no longer worth saying? It’s hard to tell — commentators basically make their livings off stating the obvious. For his part, Stauskas simply doesn’t care.

“I hear it all the time. I hear it from you guys, from twitter and stuff,” Stauskas said with a grin on Wednesday. “But I just try to do what I do out there, just play basketball. Whatever I can do to help this team win. Whether that’s just shooting threes or doing everything else on the floor, whatever it takes.”