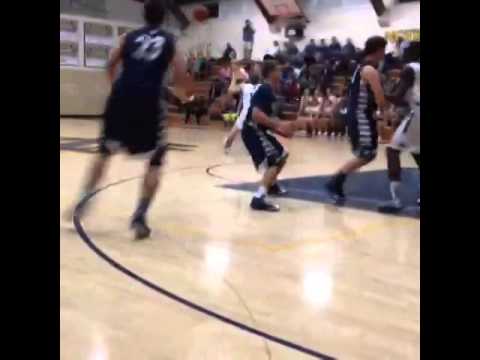 Video from the Loyalist and Loyola senior Austin Roski

Austin Hatch returned to the basketball court on Wednesday evening for his first organized basketball action since a tragic plane crash took the lives of his father and stepmother and left him in a medically induced coma in June of 2011.

After moving to Los Angeles to accelerate his comeback this year, Hatch promised to return to the basketball court this season during a press conference on November 20th, 2013. Michigan head coach John Beilein vowed to honor Hatch’s commitment after he signed his letter of intent.

The 6-foot-6 wing finally made his return. Hatch hit a three-pointer in the fourth quarter that caused his Loyola coaches and teammates to rush the floor in a 87-59 win over Sherman Oaks Notre Dame.

“It was the best technical foul I’ve ever been a part of,” Loyola Coach Jamal Adams said.

Loyola won the Mission League opener over host Sherman Oaks Notre Dame, 87-59, but the game will be forever remembered for the emotional moment that took place with Hatch. Adams and his players and fans had tears after witnessing what they had seen.

“He hit a three and our bench erupted,” Adams said. “It was unbelievable what that kid has gone through and how hard he’s worked. That kid has taught me you can come back from anything, that nothing is impossible. It was a spiritual moment.”

Hatch tweeted after the game: ‘my three was pretty cool, but, more importantly, we’re now 14-0.’