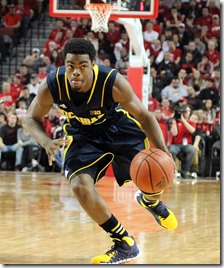 Michigan freshman point guard Derrick Walton my be coming around to the college game a bit slower than expected this season, but the guy knows how to finish. (Photo: Pat Radigan)

At least he did on Thursday during Michigan’s narrow escape from Nebraska’s brand new Pinnacle Bank Arena. The Wolverines barely nudged out the Huskers with a 71-70 victory in a back-and-forth contest in which every basket counted. However, it was the two that Walton sank — one at the end of the first half and one at the end of the game — that especially stood out.

With five seconds left in the first half, Nebraska’s Deverell Biggs hit a layup to tie the game at 30. It was a demoralizing score for Michigan, who had watched the Huskers hit four straight threes at one point earlier in the game. But they didn’t feel that way for long. Walton received the inbound after Biggs’s make, took a couple dribbles, and pulled up for the shot just beyond half-court.

The improbable basket gave Michigan only a 3-point lead heading into halftime, but the emotional lift it provided was far greater.

“It had a great impact,” Robinson said of Walton’s shot after the game. “We were a little bit down because they had just come back and they had hit a couple threes. After Derrick hit that shot, that kind of amped us up a little bit. I thought we had great energy going into halftime, and I thought right out the gates we had that same energy.”

It was an appropriate play to usher in the second half, when neither team missed all that much. Nebraska made eight of its first 10 shot attempts of the second half, while Michigan completely dominated on the offensive end for the entire frame, hitting 67 percent of its shots.

The result was a whole lot of basket-trading. Neither team could guard the other, and the Wolverines’ ineptitude guarding the high screen-and-roll was painful.

“I think both teams were doing a really good job of scoring the ball and both teams were having a tough time of stopping each other,” Nik Stauskas said of the second half.

The final 10 minutes of the game were especially gripping, with both teams throwing flurries of haymakers. Michigan got timely contributions from its two stars on the wing — Stauskas and Robinson.

Stauskas came through on a couple of screen-and-rolls with Jordan Morgan, who had himself a heck of a game — 15 points on 7-of-9 shooting. The game plan was clearly to get Stauskas the ball and run action off of him, whatever that turned out to be. The sophomore said after the game that John Beilein was drawing stuff up for him in the timeouts that they later ran for points.

“Coach Beilein, in the second half and in that one stretch in particular, he was giving me a lot of great opportunities to attack the rim,” Stauskas said. “I found J-Mo for a couple open layups and I got a couple open jumpers. So that’s all you can really ask for.”

Robinson made his own contribution, fittingly, on a play that was certainly not drawn up for him. With a minute and a half remaining in the game and Michigan down two points, Stauskas came down with a defensive rebound but had it stripped by Shavon Shields. But when Leslee Smith appeared to come up with the crucial offensive rebound, Robinson darted out of nowhere to pick the big man’s pocket at half court.

From there, Robinson took the ball straight to the rim for the dunk, tying the game.

“I thought the play that really hurt is when we got an offensive rebound with a minute and a half or whatever it was,” Nebraska coach Tim Miles said after the game. “We just don’t secure it and Robinson goes down and dunks it to go up two. That one just sticks out in my craw.”

But in a game of big plays, the biggest was once again supplied by Walton. On what would be Michigan’s final offensive possession, the freshman received a dribble hand-off from Irvin on the wing and looked up to see nothing but empty court between him and the basket. Without hesitation, Walton leaped into Leslee Smith, who slid over to the block to help. Walton rose up and hit the layup with the foul.

Michigan needed all the big plays it could get to emerge victorious against Nebraska on Thursday. While it received plenty from the usual suspects, it was Walton, with a flair for the dramatic, who provided two of the biggest.