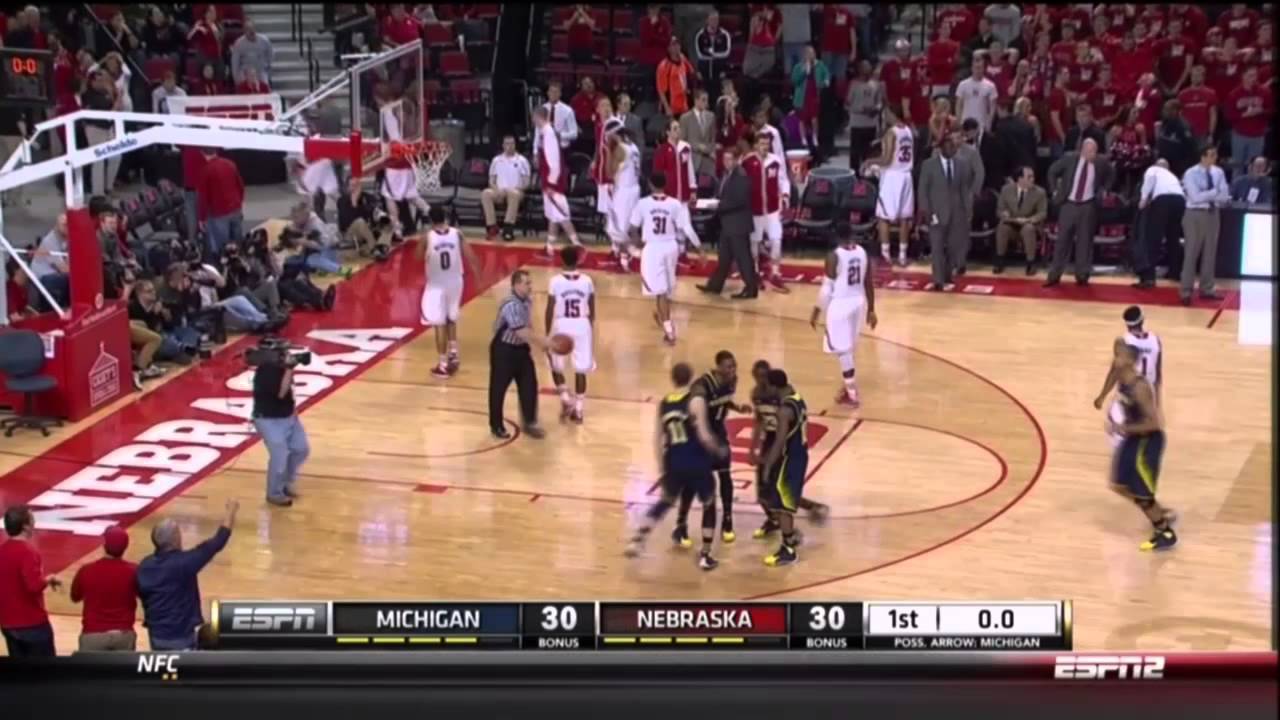 Derrick Walton had another solid game, arguably his third straight contest where there’s been marked improvement from his early-season struggles. But his 10 points on 3-of-6 shooting and four assists to two turnovers will likely be overshadowed by two shots made at the end of each half — the first is the improbable half-court heave above and the other we’ll get to later. Nebraska couldn’t miss from downtown in the first half of this game, hitting over 45 percent of their shot attempts from beyond the arc — at one point, the Huskers made four straight 3-pointers, with guard Ray Gallegos being the main culprit. This was a big reason Nebraska forced the 30-30 tie with Michigan with only three seconds remaining in the half. Walton received the inbounds pass following Deverell Biggs’s layup, took one dribble and pulled up just beyond half court. He sunk the shot, and according to Michigan’s players the Wolverines carried that momentum straight through to the second half.

2) Nebraska makes a run early in the second half

This was a game of big plays and trading baskets, but for a while, Michigan and Nebraska traded offensive runs in the second half. The Huskers found themselves down six points early in the second frame (the largest lead either team would accomplish), but quickly remedied the situation. During the 11-2 run, Nebraska exposed two different areas where Michigan struggled all night: perimeter defense and rebounding. The extent of the Wolverines’ defensive woes would be exposed later in the half, but their man-to-man defense at the 3-point line was already full of holes at this point in the game. On the first play, big man Walter Pitchford takes advantage of Jordan Morgan guarding him on the perimeter and simply takes the big man off the dribble. That’s fine, Morgan isn’t known for his perimeter defense and Pitchford made a difficult shot.

On the second play, Michigan’s lack of boxing out leads to a second-chance opportunity off a miss. Ray Gallegos, who went cold in the second half after being on fire for much of the first, misses a 3-pointer and Nebraska crashes the glass hard. First, Nik Stauskas neglects to get a body on Shavon Shields, allowing the wing to tip the ball to Pitchford, whom Morgan has completely lost track of. Caris LeVert missed a switch back onto Gallegos after switching onto Pitchford, which led to the open three, but it also means there should have been two Wolverines boxing Pitchford out. Instead, nobody was. On the next play, a 3-pointer from Terran Petteway, both LeVert and Nik Stauskas get taken advantage of. LeVert’s man, Tai Webster, cuts across the court as he runs the motion of the offense. Stauskas is on Petteway. LeVert and Stauskas switch when Petteway cuts down, toward LeVert, and Webster gets the ball at the 3-point line. Then, two things happen: first, Stauskas doesn’t put up much of a fight on defense, letting Webster blow by him easily. While this is happening, LeVert never really switched onto Petteway and instead just hung out in the lane. So he’s there to help Stauskas, but Petteway is as open as can be in the corner. Poor defense by both players on this sequence. After a fast-break layup for Nebraska, Biggs just takes Zak Irvin off the dribble baseline and scores, pushing the Husker lead to three points.

Not long after Nebraska made its big run early in the second half, Michigan’s offense responded. Really, the Wolverines played an excellent second half of offense, hitting over 66 percent of their field goal attempts. While he wasn’t the leading scorer of this game for Michigan — that title belongs to Glenn Robinson III, who tallied 19 points — Stauskas deserves the lion’s share of credit for bringing his team back from the brink in this sequence. The first play is simply a terrific individual effort by Stauskas, breaking his man down with the dribble and using a spin to get deep enough to draw the attention of Leslee Smith. Stauskas slips the ball to Jordan Morgan cutting baseline and Morgan finishes with the reverse.

On the next play, we can see why Stauskas is being hailed for his passing ability. While Trey Burke is more recent, the player Stauskas looks like the most on the pick-and-roll is Darius Morris. Here, Stauskas uses his length and height to get the ball to Morgan early in his roll and over Smith. Morgan finishes at the rim easily. Later we have a brief Derrick Walton-Glenn Robinson III interlude, where Walton makes a nice read off the screen from Jon Horford, getting the ball to Robinson cutting baseline. Robinson uses his patented jump stop and twists in the air for a nice reverse lay-in. In the two-man action we see from Horford and Stauskas on the next play, Horford improvises and moves with Stauskas as the sophomore switches sides on the screen, trying to get open. After crossing over, Stauskas steps into a long two and nails it. Finally, Robinson makes the first of his two big steals in this game, picking off a pass from Nebraska and going the other way. Stauskas takes the dribble handoff from Caris LeVert and buries the deep three. This 11-3 run took Michigan from behind by three to up by five.

Nebraska coach Tim Miles said the play that kicks off the sequence above really “Sticks out in (his) craw.” If you are aware of what that phrase means, it’s easy to see why he’d say that.  The Huskers miss a shot with the game tied at 67 and under two minutes to go. But when Nik Stauskas tries to corral the defensive rebound, Shavon Shields makes a heads-up play by stripping him from behind. The ball ends up in the hands of Leslee Smith, but Glenn Robinson III makes an even more heads-up play by poking the ball away from Smith and taking it to the house. It was a chaotic play, but one that brings to mind what some of the players were talking about in the press conference prior to Thursday’s matchup — the coaches were drilling them on the importance of 50-50 balls. Robinson never gave up on the ball and took advantage of a brief opportunity to make a big difference in the game. Instead of Nebraska getting another opportunity to score with under two minutes left, Robinson put his team up two.

In the interval between the two play in this clip, Terran Petteway made a two, Walton threw the ball away, and Petteway made one free throw out of two. This meant Nebraska had a one-point lead going into Michigan’s final offensive possession. And Walton, the player who just one possession earlier had made a horrendous turnover, stole the show. Walton received the dribble handoff from Zak Irvin and both Tai Webster and Petteway elected not to follow Walton as he drove hard to the basket. The only man between Walton and the rim turned out to be Smith, who tried to get to the block in time to take a charge. Unfortunately for Nebraska, according to the new rules, it appears he was still sliding into position when Walton began his upward motion. Walton cashed the basket with the blocking foul to put Michigan up one and solidify the play as the most important of his early Wolverine career. He would miss the free throw that followed, however.

Michigan escaped this game but, as exemplified on this final play, they did it despite at-time horrible perimeter defense and periodical inability to box out for defensive rebounds. Terran Petteway, as everyone likely suspected, got the ball on the final possession for the Huskers. John Beilein explains what he was looking for in those final seconds:

“We wanted to look at their formation and see what they had, just tell them the defense we were going to be in and their tendency,” Beilein said. “Bacari (Alexander) did a great job with the scout. What their tendency was to run at that time. We figured they were going to take the ball at the basket through a variety of screens. Just stay in front of them make them score the ball over what we call a walled chest. Do not reach, don’t put them at the foul line, make them score over you.”

It was the “stay in front of them” that Michigan had trouble with. Nik Stauskas was an offensive wizard in this game, but his on-ball defense really struggled. He gets beat easily by Petteway on this play, but Zak Irvin is there to help with his hands up. Irvin does a good job of walling off Petteway and forcing a slightly more difficult layup. Petteway misses the layup and Leslee Smith is there for the attempted tip. Stauskas does stick with Smith to prevent an easy drop off pass but he can’t quite box out the Husker big man.  The big gamble on this play was Beilein going with Robinson at the five instead of playing one of his big men. This time, it paid off — but barely — and Michigan got the roll.