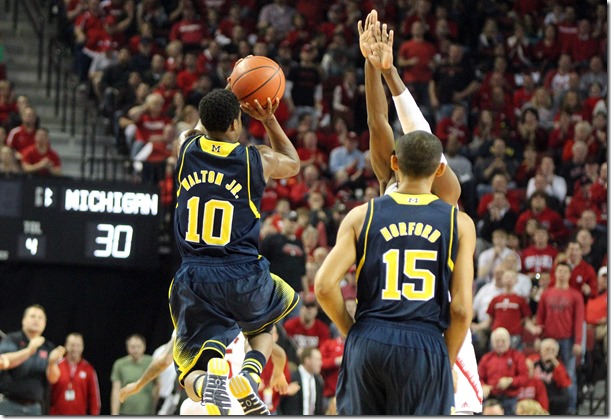 Despite a frightening defensive performance, Michigan figured out a way to leave Lincoln, Neb. with its third Big Ten victory.

The Wolverines second half defensive effort was reminiscent of their misstep in State College last season. Nebraska shredded the Wolverines with dribble penetration and high ball screens and was poised to grab its biggest win to date in the brand new Pinnacle Bank Arena.

Except the Huskers couldn’t stop Michigan either. All five Michigan starters reached double figures and the Wolverines made just enough plays in the closing minute to pull out their second Big Ten road victory. In a game that featured 10 lead changes, 11 ties and never saw a score differential bigger than six points, it should be no surprise that the result came down to the final possession.

Derrick Walton hit the game winning layup with 23 seconds to play just seconds after giving the ball away on a sloppy turnover. Trailing by one, Michigan’s freshman point guard took a handoff from Zak Irvin and drove baseline, exploiting a poor switch by the Huskers and finishing over Leslee Smith at the rim as a blocking foul was whistled. Walton didn’t shy away from the spotlight in the clutch but missed his free throw, providing Nebraska with a final chance.

The Huskers had two shots on their final possession but Terran Petteway’s driving layup rimmed out and Leslee Smith was unable to tip the ball into the hoop as the clock expired. The Wolverines escaped in spite of themselves.

It doesn’t take advanced statistics to realize that there were major problems with Michigan’s defense. The Wolverines surrendered 1.19 points per trip, on-par with their worst defensive performances of the season against Arizona and Duke. Nebraska is not Arizona or Duke. The Huskers scored 40 points in 30 second half possessions for a ridiculous 1.32 points per trip in the final 20 minutes.

Nebraska shot 65% on twos (76% in the second half) and 35% on threes for a 60% effective field goal percentage. Those numbers are clear signs that there are very real defensive problems. Michigan’s defense allowed four straight open threes midway through the first half and while it was able to correct those issues, additional flaws were uncovered. The Wolverines were helpless defending dribble penetration, especially off the high ball screen, in the second half.

Michigan allowed 10 second chance points to an average offensive rebounding group, but forced the Huskers into more turnovers and fewer free throws than they are accustomed to. The bottom line was Michigan just couldn’t keep Nebraska out of the lane or protect the rim. That’s especially concerning because there are a lot of guards better than Petteway or Deverell Biggs left on the schedule.

Michigan tried to make some small adjustments but the results didn’t follow. The Wolverines experimented with the 1-3-1 in the first half and gave up a three-point play. They tried to switch all ball screens late but that resulted in isolation defense for Jordan Morgan. On the final possession Beilein went with Robinson at the five  to switch all screens but that still resulted in an open layup and a missed box out. I’m not sure there’s an easy fix defensively. Michigan can make improvements on that end of the floor but the defensive ceiling is low. U-M guards haven’t proven themselves to be great defenders and there’s not a rim protector to make up for their mistakes.

Michigan’s offense was somehow good enough to outpace its struggling defense. Scoring 1.20 points per trip is an impressive feat away from home and Michigan needed every basket. The Wolverines were nearly unstoppable inside the three-point arc. Michigan shot 76% on twos and stuck with what worked, attempting 66% of its shots from 2-point range. The Wolverines only grabbed four offensive rebounds and scored six second chance points but their first-shot offense was so effective that other offensive statistics were insignificant.

Free throws continued to plague the Wolverines. Michigan was just 3-of-9 at the charity stripe against the most foul-happy team in the Big Ten. The Wolverines didn’t get to the line enough and couldn’t convert when they did. Michigan did a decent job of keeping Nebraska off the free throw line (12 attempts) but the Huskers were a much more efficient 11-of-12 at the stripe.

Michigan got a lot of breaks – Derrick Walton hit a halftime buzzer beater from half court, his late drive was a 50-50 call, and Nebraska missed two clean looks at the rim in the final seconds – but it also made plenty of breaks. The Wolverines made the sort of winning plays that they made at Minnesota but failed to make against Iowa State, Charlotte or Arizona. There won’t be many games that come easy to this team, but it has the offensive firepower to win a few close games. Michigan has a great chance to move to 4-0 in the conference next Tuesday against Penn State before traveling to Madison for a matchup with Bo Ryan’s undefeated Wisconsin Badgers.