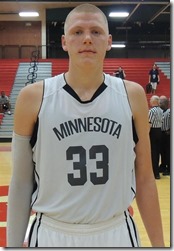 Michigan head coach John Beilein took the recruiting trail this weekend as his Wolverines were off before a Tuesday game against Penn State. Beilein watched a pair of consensus top-50 class of 2015 recruits: Saginaw guard Eric Davis on Friday and Wisconsin big man Henry Ellenson on Saturday.

Beilein stopping in on both prospects is significant because they don’t hold Michigan offers and his trip is a sure sign that both prospects are rising up Michigan’s recruiting board.

Davis had a game-high 24 points in front of Beilein on 10-of-15 shooting with six assists and five rebounds. Davis’s teammate, class of 2017 phenom Brian Bowen added 10 points, 13 rebounds and three blocks. Davis took his most recent trip to Michigan State for the Spartans’ win over Ohio State but he has has visited Michigan several times, including for the football night game against Notre Dame, which he called ‘one of the most fun nights ever’. He also holds offers from Michigan State, Kansas, Oregon, Ohio State and Illinois, among many others.

Ellenson, a 6-foot-9 big man, would bolster Michigan’s frontcourt with his size and inside-outside ability. Beilein was joined by assistant coach LaVall Jordan to watch Ellenson rack up 19 points, 13 rebounds and two blocks in a victory.

Purdue head coach Matt Painter was also on hand to watch Ellenson, whose brother plays at Minnesota. Ellenson has started to draw interest from Michigan State and North Carolina while Wisconsin, Minnesota, Arizona State, Baylor, Indiana, Boston College, Creighton and Georgetown are some of his other major offers.

Here are some video highlights from one of Ellenson’s earlier games this season.

Bacari Alexander was also on the road over the weekend, checking out Pershing vs. Consortium in Detroit.  Alexander was undoubtedly focused on top-10 class of 2016 prospect Josh Jackson. Jackson tallied 26 points and 11 rebounds in a three point loss to Pershing and VCU bound Justin Tillman.

Michigan quarterback Devin Gardner was also in attendance checking out Jackson (video). Here’s some recent footage of Jackson from this season.

Kennard listed seven schools when a Duke blog, Blue Devil Digest, asked him what schools are high on his list. Kentucky is still the presumed favorite in Kennard’s recruitment as the 6-foot-6 wing has visited Lexington many times since John Calipari offered this summer.

Thomas Eames: What other schools are currently high on your list?

Thomas Eames: That’s a great list. Do you have any time table for when you will take your official visits and eventually make a final college decision?

Luke Kennard: Possibly the end of my junior year.

Kennard continues to post monster numbers, including recent performances of 46 and 53 points. Here’s footage of a 46 point outburst.