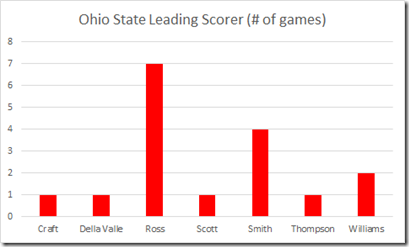 The Big Ten Roundup has been replaced with Big Ten Power Rankings this year at UM Hoops. We’ll take a look across the conference on a weekly basis, rank all 12 teams and attempt to provide some insight about each team.

The Badgers are the class of the conference right now and they will benefit greatly from their Big Ten schedule. Wisconsin doesn’t play at Michigan State or Ohio State, so its toughest road games appear to be at Iowa and at Michigan.  That’s a benefit that Bo Ryan’s group might not even need. The Badgers have been dominant offensively, scoring 1.24 points per possession in league games, and defend two-point and three-point shots better than anyone in the conference. Could the Badgers run the table this season? Ken Pomeroy’s projections give them a 1.6% chance at the feat.

Iowa finally got the signature win to provide the validation it craved by knocking off Ohio State in Columbus. Iowa was 0-7 against top 25 teams last year and had suffered close losses to Villanova, Iowa State and Wisconsin this season.

The Hawkeyes obviously grade out very well. Michigan and Wisconsin are very effective when they run, but are also very selective. Michigan State and Iowa appear to be the two elite transition offenses in the conference by a fairly wide margin. Indiana runs more than most in the league, but simply runs itself into bad shots.

Michigan State escaped with two home overtime victories this week. While the Spartans dominated overtime in both games (outscoring their opponents 30-14 combined), they were only in overtime because of a handful of critical late mistakes. Despite playing two overtime games, Michigan State still has outscored its opponents by an impressive .178 points per trip.

The Spartans probably have the best starting lineup in the league with Appling-Harris-Valentine-Dawson and Payne, but injuries and depth issues could be a problem down the road. Travis Trice missed the Ohio State game, a major reason for Michigan State’s late turnover issues. Adreian Payne missed the Minnesota game with a foot sprain, and will be out until he’s pain free, allowing Minnesota to provide an upset scare. Tom Izzo has bench players to call on in Trice, Matt Costello, Alex Gauna, Alvin Ellis and Gavin Schilling, but the drop off is worrying if the injury bug sticks around.

Winners of their first 15, Ohio State took a step back this week and suffered losses at Michigan State and at home to Iowa. The Buckeyes lost to two very good teams, but a home loss this early in conference play is certainly a disappointment. Iowa and Michigan State were the first two Ken Pomeroy top-50 teams that the Buckeyes have faced this season.

Part of Ohio State’s struggle offensively is finding a leading scorer. LaQuinton Ross wears that hat, averaging 13.6 points per game, but the Buckeyes have had seven different players lead them in scoring in at least one game this year.

If Ross struggles can the Buckeyes find enough scoring to win close games? He needed 23 shots to score 27 points and turned the ball over seven times in two losses this week. Ohio State will need more consistent production to make a run at the Big Ten crown.

Michigan’s three Big Ten wins are over teams with a combined 2-8 record in conference play so it’s tough to jump to any conclusions. The Wolverines haven’t slipped up but haven’t had an opportunity at the one of the big dogs in the conference. Michigan is close to having a claim for the No. 4 spot in the rankings but needs to prove it with a big victory to take the next step up.

While many Big Ten teams have been forcing the tempo this season (even Wisconsin is averaging 66.5 possessions per game), Michigan has slowed things down. The Wolverines are playing the slowest basketball in the Big Ten, averaging just 60 possessions per conference game.

While Michigan’s offense doesn’t appear to have fallen off much (The Wolverines’ 1.15 points per trip is second best in the league), the defense is a real concern. Michigan is only surrendering a point per possession but allowed a Nebraska team that only managed 174 points on 195 possessions against other Big Ten foes to score 1.18 points per trip on Thursday.

All four of Minnesota’s Big Ten games have been decided by either a single possession or in overtime. Two were disappointing losses to Michigan and Michigan State, while the others were underwhelming wins over Purdue and Penn State. The Gophers have a prime opportunity for a marquee win on Thursday when they host Ohio State. The Buckeyes will be reeling after losing at home to Iowa, but Minnesota needs to win with a trip to Iowa and a home date with Wisconsin on the schedule next.

Indiana is the best offensive rebounding team in the Big Ten and is ranked in the top ten nationally in free throw rate, but the Hoosiers only have the eighth best defense in the conference. That’s because they turn the ball over so often. Turnovers plagued Tom Crean’s early Indiana teams and those ugly issues have returned this season. Indiana is the second youngest team in the conference, but giving the ball away on just shy of a quarter of your Big Ten possessions is inexcusable. To make matters worse, the Hoosiers are shooting just 36.4% on two-point attempts against Big Ten foes.

From 2007 through 2011, Matt Painter had elite defenses ranked in the top-20 nationally in defensive efficiency. From 2012 onward, the Boilermakers haven’t ranked better than 72nd. Defense appears to be a struggle once again as the Boilers are surrendering 1.10 points per trip in league play (9th in the league). The Boilers have AJ Hammons, the third best shot blocker in the country, but are allowing league foes to shoot 54.2% inside the arc – second worst in the conference.

The Illini are the worst shooting team in the Big Ten by a wide margin. Illinois shot just 34-of-105 on 2-point field goals in two games last week. Against the league’s best field goal percentage defensive team in Madison, that’s excepted. Against the worst team in the conference and the second worst shooting defense, that’s a real problem. The Illini have also struggled to convert second chances, grabbing 39 offensive rebounds in the last two games and turning them into just 11 second-chance points.

Nebraska has a lot of pieces to be an effective team. Terran Petteway is a great slasher, Shavon Shields had a promising freshman season last year, the big man duo of Walter Pitchford and Leslee Smith is very efficient, and Ray Gellegos is an effective three-point bomber.

While the Huskers’ 0-4 record looks bad, they have played the hardest schedule in the Big Ten thus far with games at Iowa, Ohio State and Purdue and a home game against Michigan. The key for the Huskers will be better production from the point guard spot. Freshman Tai Webster and junior college transfer Deverell Biggs 12 assists and 13 turnovers combined in Big Ten play.Biggs was terrific off the bench against Michigan (14 points on 5-of-7 shooting) but he’s just 12-of-34 in Nebraska’s other three games.

“You know what I loved? Guys like Scottie Reynolds who didn’t care about how he looked. He just played,” Chambers said. “DJ [Newbill]’s that type of kid who just doesn’t care. We need more guys like that. Too many guys on this team are worried about everything on the outside.”

Tim Frazier and DJ Newbill are great but they aren’t Scottie Reynolds. The Nittany Lions are 0-4 despite opening the year with three home games and will have to play three of their next four on the road at Michigan, Purdue and Ohio State.