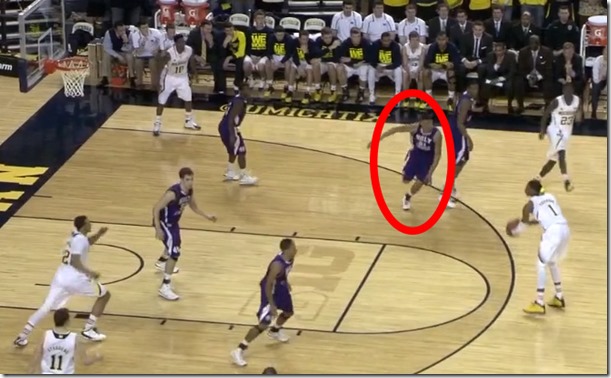 WATCH: Every made field goal in Robinson’s last seven games

Glenn Robinson III started the season in a rut. Eight games into the season he was averaging less than 12 points per game and he looked nothing like the NBA lottery pick that he’s supposed to be.

He looked like the same player that everyone saw last year. He was content to do his scoring on catch and shoot jumpers, backdoor cuts and transition dunks. That was Robinson’s role a season ago, but Trey Burke isn’t running out of the tunnel anytime soon. Michigan needed more from Robinson and Robinson’s future depended on him showing more of his talent on the floor.

Robinson’s season bottomed out when he was severely outplayed by Duke super-freshman Jabari Parker in front of dozens of NBA scouts. Michigan was throttled by the Blue Devils in Cameron Indoor Stadium as Robinson tallied just eight points on sub-50% shooting.

Something needed to change.

It’s tough to know why or how the light clicked on for Robinson, but ever since that woeful performance at Duke he’s has been a different player. His scoring average is up nearly five points per game, he’s been more aggressive, more efficient, and Michigan has been a much better team – even without Mitch McGary.

In the first eight games of the season Robinson averaged 11.6 points per game, shot 51% on twos, 25% on threes for a 47% effective field goal percentage.

In the last seven games, Robinson is averaging 16 points per game (even more impressive considering an injury-induced 20 minute showing at Minnesota), shooting 77% on twos, 35% on threes for a 67% effective field goal percentage.

After the jump we take a closer look at what changed in Robinson’s production.

Finishing at the rim

Robinson’s success starts with his ability to finish at the rim, but he’s developed into a player capable of much more than finishing off back-door alley oops emphatically.

Robinson has missed just one field goal attempt at the rim since the game in Durham. He’s made his other 24 attempts. When Robinson gets to the basket, he’s essentially automatic.

While Robinson’s finishing is statistically impressive, it’s important to note that he’s turned into much more than just a finisher. We charted Robinson’s last 45 made field goals – and also published them in the video above – to see how the sophomore wing was scoring his points.

While 51 percent of Robinson’s offensive production still comes from baseline cuts and in transition, he’s scoring in a number of other ways as well.

Robinson is scoring off pick-and-pops, straight line drives, catch and shoot three pointers, flashing to the opposite post and with his mid-range jumper. That’s a pretty impressive array of skills for a player that’s supposedly a one-trick pony. Michigan is getting Robinson involved in the offense and he’s scoring effectively.

A year ago Robinson made just one shot posting up, one shot as a pick-and-roll man and seven shots on isolation drives – in a 39 game season. There’s little question that Robinson has a new-found confidence within the offense and it appears to be growing on a game-by-game basis.

Michigan isn’t doing anything earth shattering to get Robinson the ball in scoring positions, but a couple small tweaks are resulting in Robinson being more effective when he catches the ball.

In this example, Mitch McGary sets a ball screen for Spike Albrecht and Robinson’s defender, Brandon Ashley, will have to pinch in to defend the roll man.

Albrecht and McGary draw Ashley’s attention and Robinson is left open as Albrecht turns back to find him. The ball screen has drawn three defenders with two players, meaning someone is open.

The end result is Robinson has the opportunity to attack a recovering defender in space. Ashley is closing out hard, and Robinson uses a pump fake before blowing by Ashley off the dribble.

Michigan is able to run this same action with side-ball screens as well. This is the sort of residual action that Robinson has feasted on in the past, but the major difference is that Robinson is now being more aggressive attacking off the bounce when he catches the ball. In the past he might have looked for the open three or made an extra pass, rather than attack the rim.

Michigan also runs designed action to isolate Robinson on the opposite post from his traditional wing position on the right side of the offense. The Wolverines use a simple cross screen from Caris LeVert to free Robinson for the quick pass from the other wing.

As LeVert sets the screen, Robinson flashes open with just enough space and Stauskas delivers him the ball. If a great screen is set, or the defender is napping, this play can result in an uncontested layup but it’s more than effective to simply isolate Robinson. From this point, Robinson is capable of playing with his back to the basket against a smaller defender or facing up and driving past a bigger defender.

Depending on how the opposition defends ball screens – this won’t work if the defense will switch ball screens 1 through 4 – Michigan can also dial up a pick-and-pop with Robinson as the screener.

On this ball screen you can see that Robinson’s defender hedges the screen, preventing LeVert from driving but leaving Robinson wide open on the pop. By the time he starts to recover, Robinson has the ball wide open and can shoot the triple or drive to the rack.

This is a look that’s based on scouting and personnel. Robinson’s versatility in the pick-and-pop will force many opponents to modify their defense against the Wolverines to account for his versatility at the four position.

Robinson has made major strides in the right direction, especially on the offensive end of the floor, but with a lottery talent there’s always room for improvement.

One area where Robinson hasn’t developed is on the glass. The 6-foot-6 sophomore’s athleticism is among the very best in the country, but his rebounding numbers have been stagnant. His offensive rebounding rate has actually decreased to 5.2% from 7.8% last season. His defensive rebounding rate is up a hair to 12.8% from 11.4% but that’s still behind other Wolverine guards like Caris LeVert. There are a host of players – Branden Dawson, Sam Dekker, Ross Travis and Austin Hollins to name a few – around Robinson’s size in the Big Ten with much better rebounding numbers.

Offensive putbacks are conspicuously absent in Robinson’s recent seven game stretch. He hasn’t putback an offensive rebound since the Duke game, although he does have seven offensive rebounds in that span. Offensive rebounding isn’t a priority for John Beilein but with Robinson’s tools, it would be encouraging to see him attack the glass a little bit harder.

His 2-point jumper is improving and he’s ever-efficient at the rim but Robinson still hasn’t found a groove from behind the arc. He’s just 15-of-51 on the year and while his shooting has improved in the second half of the season thus far – 35% vs. 25% – he is just 4-of-17 in the last five games.

Each game over the past month, Robinson has made two or three plays that he wouldn’t have earlier this year. While one or two might not catch your eye, the consistent progress has turned Robinson into a much better player.

Robinson’s improvements have also gone beyond his actual play on the court, he has also made strides with his leadership. Known as a quiet and reserved player, he was extremely vocal in the Wolverines’ win at Nebraska on Thursday. That enthusiasm was obvious from the jump ball and Robinson made a hustle play to turn a would-be Nebraska offensive rebound into a dunk late in the game. With Mitch McGary sidelined with back surgery, Robinson will need to provide that sort of leadership going forward if the Wolverines are going to compete in the Big Ten.

There are tougher tests ahead and Robinson will rightfully be judged for how he performs against the league’s elite, but Michigan fans should be excited about his improved play over the last month.