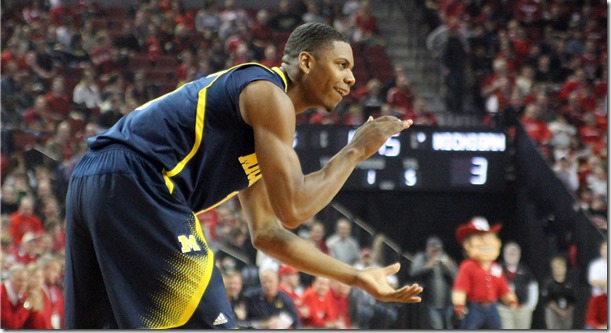 It’s no secret that Michigan has had trouble guarding opposing offenses three games into the Big Ten season.

While the Wolverines held Minnesota to just under a point per possession, the defensive performance against the Gophers in Michigan’s first conference game was full of holes: the Wolverines gave up way too many offensive rebounds, but the biggest problem was that they couldn’t keep Minnesota’s guards outside the paint.

It’s true that Michigan shut down Northwestern other than an offensive spurt from Drew Crawford in the first half, but pretty much everyone is shutting down Northwestern right now. It was against Nebraska, a team without a Big Ten victory, when the Wolverines’ defense, or lack thereof, was truly exposed.

In the second half, Michigan allowed Nebraska to score a horrifying 1.32 points per possession. The Wolverines had significant issues guarding the high ball screen and staying in front of the Huskers on the perimeter in one-on-one situations. Beilein said as much during his press conference on Tuesday.

“The big thing that a lot of people are still having trouble with is ball screen defense,” Beilein said, looking back on his team’s victory over Nebraska. “I’ve looked at this league and this league was a hard hedge league, almost everybody was hard hedging. We’re one of the few teams that are hard hedging right now. Every time we find a way to defend a ball screen, everyone else has something new to it. A big basis of a young team is that it has to continue to grow. We can’t give up on our fundamentals.”

Michigan’s inability to guard ball-screens was debilitating in last year’s loss at Penn State, and it’s something that the Michigan coaches have stressed in practice before the Nittany Lions visit Ann Arbor on Tuesday. Glenn Robinson III added that it’s trickier than it looks — there are so many different variations of the high ball-screens set that the Wolverines see a different one with almost every team.

“As far as ball screens, we’ve been working on that and watching film,” Robinson said. “We’re getting better at that every day. We never know what we’re going to see, we’re facing different guys every night who do different things off the ball screens. Knowing our personnel I think is the biggest key to that.”

Facing a Penn State team that’s winless in the Big Ten at the Crisler Center doesn’t seem to put the Wolverines in dire straits, but the Nittany Lions have two of the best attacking guards in the country in Tim Frazier and D.J. Newbill.

One option to alleviate pressure on the man-to-man defense is going to the 1-3-1 zone that Beilein has been known for deploying sporadically. Michigan tried the zone briefly against Nebraska in the first half of the game on Thursday, only to have it easily exploited. That’s the balancing act Beilein faces when choosing between running his traditional man-to-man or switching to the unconventional zone.

“The 1-3-1 zone, you’re going to see it again,” Beilein said. “But you’re not going to see it very long if they make baskets, that’s for sure. But if they turn it over like one or two teams have this year, we’ll throw it back in.”

Beilein later articulated the give-and-take of running such a unique defensive set.

Ultimately, Michigan will not be able to rely on the 1-3-1 to improve its defense. Too many players are unfamiliar with it — while Beilein may implement it for brief stretches, it’s not something that’s viable for more than a few possessions at a time. It’s simple: the Wolverines must get better guarding the ball in man-to-man.

Michigan has been exploited again and again during the conference season by slashing guards getting to the lane. Glenn Robinson III said one-on-one defense is something the players have been working on more than anything else in practice.

“Something I liked that we’ve been doing in practice is a lot of one-on-one stuff,” Robinson said. “A lot of one-on-one drills, getting better in our gaps and personally guarding our own man. That comes along with our scouting reports. I been on the team just to make sure they know the scouting report of each player. That plays a big role in our defense.”

Michigan has work to do on the defensive end. As the offense progresses and players like Derrick Walton and Glenn Robinson III settle into their roles, how much the Wolverines improve their defense will likely be the deciding factor for Big Ten success.