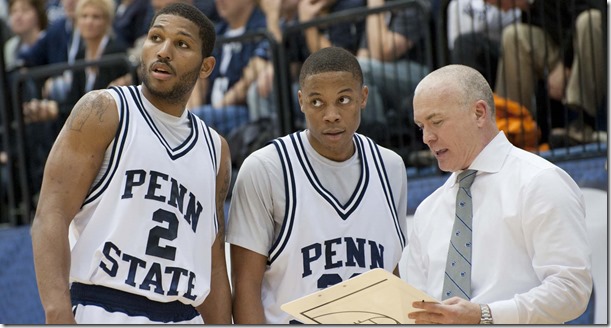 Michigan had plenty of memorable victories last season, but one loss was unforgettable: 84-78 at Penn State. The Wolverines traveled to State College, PA and went home with a loss to a team that was previously 0-14 in Big Ten play.

Michigan beat the Nittany Lions a month later and the rosters are obviously different this season, but that six point loss is still fresh to this year’s Michigan team. Especially after a defensive effort at Nebraska that saw many of the same problems defending high ball screens that plagued the Wolverines last February.

The Nittany Lions don’t have a conference win to show for it, but they’ve proven they can play with good teams for stretches this year. Penn State led Michigan State at halftime before being blown out in the second. The Nittany Lions also held late second half leads against Minnesota and Indiana before letting them slip away in the final moments. Those games were at home, and Penn State’s lone Big Ten road game was ugly a 75-55 shellacking at Illinois, but this team clearly has some talent to work with.

Penn State is ranked 76th in adjusted offensive efficiency but points have been at a premium in Big Ten play. The Nittany Lions have shot the ball pretty well on the season with a 51.4% effective field goal percentage (89th), but have struggled in the Big Ten. The Nittany Lions are shooting just 41.4% on twos (10th) and 30.5% on threes (8th) in league games for a third-worst 43% effective field goal percentage. Penn State has done a good job of valuing the basketball this season with a turnover rate of 15.1% (23rd), but grabs just 28.8% of its missed shots (257th) and makes very little effort to crash the offensive glass. The Nittany Lions also have a lot of players that can get to the free throw line and score over a quarter of their points at the stripe.

Penn State’s defense is most effective around the rim. The Nittany Lions have the fourth best field goal percentage defense at the rim in the Big Ten, trailing Michigan State, Indiana and Wisconsin. In league games, Penn State has the third best 2-point defense and the second best block rate, but that rim protection comes at a cost.

First, the Nittany Lions don’t defend the three-point shot well. PSU opponents shoot 35.2% (36.7% in B1G games) from long distance and attempt 35.1% (256th) of their field goals from behind the arc. But most importantly, fouls and defensive rebounding have been Penn State’s Achilles’ heel in Big Ten play. The Nittany Lions have faced some of the best offensive rebounding teams (Indiana, Illinois) and free throw teams (Indiana, Minnesota) in the conference, but the numbers are ugly. Big Ten opponents have collected over 40% of their missed shots (12th B1G) and attempted over 50 free throws per 100 field goal attempts (10th B1G).

Tim Frazier and D.J. Newbill use over 51 percent of Penn State’s offensive possessions and average 34 points, nine rebounds and just shy of nine assists per game. Frazier is the best setup man in the Big Ten. John Beilein said the Houston native is putting up ‘Trey Burke numbers’ in his return from his Achilles’ injury and that’s pretty accurate. His assist rate and 2-point shooting percentage are identical to Burke’s numbers last season, but he’s not quite the perimeter shooter that Michigan’s All-American was last year.

Frazier’s return has allowed Newbill to shift back to the off guard and focus on what he does best: scoring. Newbill is shooting 52% on twos and 43% on threes this season, and his 26 long range makes this season match his career totals in his previous two seasons at Penn State and Southern Miss. Newbill leads Penn State in scoring in league play despite a zero-point performance against Minnesota.

Ross Travis is one of the best undersized rebounders in the Big Ten. The 6-foot-6 junior is Penn State’s best rebounder on both ends of the floor and splits his time between the three and the four spots for the Nittany Lions. Brandon Taylor, 6-foot-7, 235 pounds is the other option at the four position and can even play the five if Penn State opts to play small ball.

Donovon Jack starts at the five position and possesses a unique skillset. He’s a great shot blocker and can score inside (57% on twos) or outside (47% on threes), but is just an average rebounder. Michigan trouble guarding Nebraska’s three-point shooting five man, Walter Pitchford, so Jack should provide a challenge for the Wolverines.

The Nittany Lions also added two mid-semester transfers within the last month, 6-foot-1 Pitt transfer John Johnson and 7-foot SMU transfer Jordan Dickerson. Johnson has stepped right into the rotation, averaging 11 points and 23 minutes per game while shooting 37% from 3-point range. Dickerson adds depth to the frontcourt, but has been whistled for nine fouls, made one basket, turned it over three times and blocked five shots in five games.

According to Ken Pomeroy’s projections, this is the easiest game left on Michigan’s schedule. Pomeroy’s metrics give the Wolverines a 90% shot at victory and project a final score of 79-65.