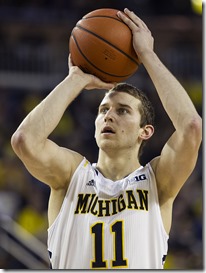 Michigan’s loss at Penn State on February 27th of last year wasn’t the only time the Wolverines played the Nittany Lions that season. In fact, they beat Penn State in two out of their three matchups with them — first at home, and then later in the first round of the Big Ten tournament.

But there is no question that the 84-78 loss at the Bryce Jordan Center is the game players on this year’s team remember most clearly. Glenn Robinson III certainly does.

“I definitely remember that game, that being a tough defensive game for us,” Robinson said during Michigan’s press conference on Monday. “We learned a lot as a team. I think that was a turning point for our season, but still that was a tough one to swallow for us. Still, the guys that were here last year, we all remember that game. We’ll come ready to play, we’ll have a lot of energy.

“I’ve been waiting for this game for a long time, actually.”

The wound left by Michigan’s loss at Penn State last season has clearly been long to heal. So how to the Wolverines avoid falling into a similar trap this season?

There was a sense that perhaps Michigan may have looked past the Nittany Lions last season on its quest for a second consecutive Big Ten title. This would have been entirely out of character for a Beilein-coached team, as staying within the moment and taking the whole season in game-by-game chunks has become a guiding philosophy of Michigan’s program. Beilein and the players both avoid talking about future matchups to the extent that being asked questions about them makes them visibly uncomfortable.

Beilein said he didn’t think his team looked past Penn State last season, and that Michigan must be prepared for an even stiffer test this year.

“We just did not execute offensively or defensively, including as a coaching staff in the game at Penn State,” Beilein said. “We’re a lot better since then. I think Pat Chambers has a much better team than he had last year. They have two transfers in there right now who just became eligible and they’re both really high-level players. They have a rhythm going there now, everybody has their roles. If they beat us, it won’t be because we look past them.”

Michigan will need to harness all of its focus for this game, which could be considered the last of the calm before the storm of a tumultuous stretch of Big Ten play. After Penn State, the Wolverines travel to Wisconsin before going up against Iowa at home and then Michigan State in East Lansing. If there’s a time when it’s easy to look ahead, it’s right now.

Robinson said the coaches have placed the focus squarely on Tuesday night’s game.

“I think the coaches are doing a great job of making sure we’re focused on the next game,” Robinson said. “They’ve never addressed a week in advance or two weeks in advance at all. We’re focused on Penn State today and as the days go by.”

It’s a good thing, too — the Nittany Lions are probably quite a bit better this year than last, when Michigan handed them their first win of the Big Ten season in late February. Penn State is without a win thus far in conference play, but its backcourt is brimming with talent and its last two losses, at home to Minnesota and Indiana, came by the combined margin of six points.

Tim Frazier and DJ Newbill make for a talented, experienced guard duo. Frazier is more of a distributor, and has a sky-high assist rate of 37.5 percent. Newbill has developed into a solid shooter from deep and is currently hitting 42 percent of his attempts from behind the 3-point line.

“One of the only benefits of injury is that Tim got to sit back and watch for a year,” Beilein said, referring to the season-ending ruptured Achilles Frazier suffered in November last year. “He’s got Trey Burke numbers now with over 100 assists. He’s so quick. His first couple years in the Big Ten, we didn’t guard him — he had Battle and he had these other guys. Now, he shoots it in.”

“Newbill is incredible. Last year, people didn’t guard him to shoot and now he’s shooting 42 percent. Both of them get to the foul line. Newbill had a tremendous game as a point guard against us at Penn State last year. Now you’ve got a fourth and a fifth year guy out there with a lot of experience.”

Another player who doesn’t get as much publicity as the two guards is Ross Travis. Travis isn’t a terribly efficient offensive player, but in Michigan’s loss to Penn State last season, he scored 15 points and pulled down 12 rebounds. Robinson said Travis is a particular focus of his going into Tuesday’s game.

“He’s a great player. I remember him a lot from last year,” Robinson said. “Similar role to what I did: rebounding, high-energy guy who can also shoot and get to the rim. We have a lot of focus on him, especially blocking out, defense.”

Beilein said Michigan learned a lot from its loss last season, and those lessons have carried through to the current season. One of the biggest lessons? It’s the little things.

“There are so many small details. Little things will matter in the game,” Beilein said. “I think we shot poorly from the foul line, we had some turnovers, sloppy turnovers against their press. Just a sense of valuing that you can lose any game. If you can run into a guy who can go 6-for-10 from three — we didn’t look past that. He just got open and we didn’t defend it well but some of the action they ran, we didn’t have the scouting report. It was something new, or we missed it.

“But you can still stop that if you maybe pay more attention to foul shooting in practice, or we have fewer turnovers. We gave them the ball or we took really bad shots two or three times. You lose that game, and all that stuff comes back and you say, okay, we couldn’t stop the 6-for-10, but we could have done this this and this. And that’s what we learned.”