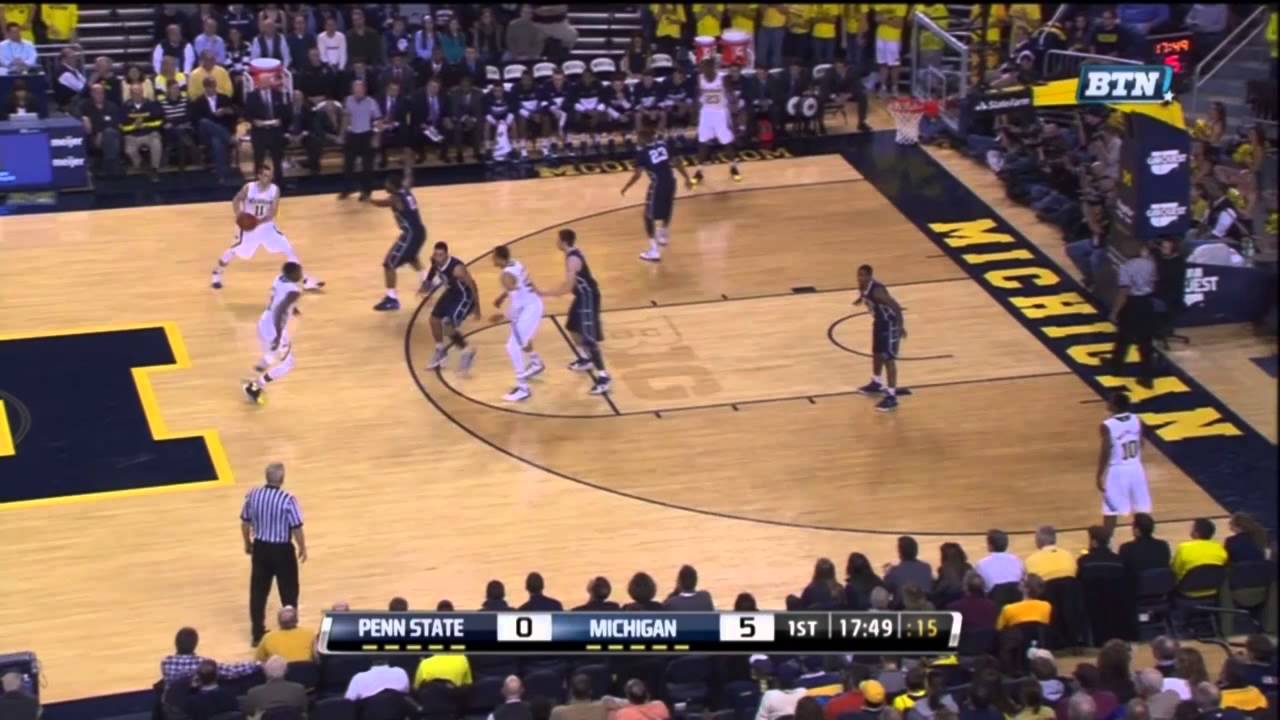 Michigan’s freshman point guard continues to show marked improvement with every game. Derrick Walton was confident and aggressive early, and he also benefited from his teammates’ vision, a point that was not lost on him.

“I just happened to get off to a hot start today,” Walton said after the game. “My team kept finding me and we just run with it.”

It’s tough to remember a time when Michigan’s point guard ran action that took him to the corner for kick-out threes, but that’s precisely what Walton has found success doing with the slashing ability of teammates like Caris LeVert, Nik Stauskas and Glenn Robinson III. On Michigan’s first offensive possession, Walton hands the ball off the Robinson and then drifts to the corner. When Robinson takes his man off the dribble and draws help, he kicks out to Walton, who hits the three. Pretty simple, but also pretty effective. On the ensuing defensive possession Caris LeVert comes up with one of his many deflections on the night and forces a Penn State turnover. Pushing the ball to Walton, the freshman finishes at the rim. On the final play of the sequence, Walton is once again open in the corner off a LeVert drive, looking more like Stauskas last season than a player taking over Trey Burke’s position. The Detroit native scored 12 of his 16 points in the first half.

As we went over in some detail, Caris LeVert and Nik Stauskas have both stepped up big in their roles as distributors for Michigan this season. Both guards have taken it upon themselves to fill the passing vacancy left by Burke. This clip features the pair making some downright nasty plays off screen-and-roll (Stauskas’ specialty) and dribble penetration (LeVert’s area of expertise). On the first play, Stauskas uses some delayed action off a high ball screen from Jon Horford to get Penn State off balance. He can’t pass to Horford on the initial roll because Tim Frazier is looking for it, but the instant Frazier starts to commit to help, Horford is open under the basket and Stauskas finds him with a great bounce pass. The next play is one that probably shouldn’t have worked, but Stauskas just makes a great read and a terrific pass. Horford rolls to the basket after a ball screen and Stauskas gets him the ball just an instant before Jordan Dickerson recovers. Stauskas likely also saw the only help on Horford would be provided by the 6-foot Graham Woodward. Regardless, he had to fit the ball through an exceedingly tight space — great play. Finally, Caris LeVert and Jordan Morgan get in on the action through the dribble-drive. LeVert displays great quickness with a pump fake and easy blow-by on Donovan Jack, putting Penn State on its heels defensively. Just go to the 38 second mark of the video — LeVert could have hit any one of his teammates for an open shot as the Nittany Lions are entirely focused on him. The sophomore makes an astounding mid-air read, getting Ross Travis in the air before making a wrap-around pass to Morgan for the slam.

As has been the case for much of the season, occasional defensive lapses by the Wolverines were nullified by unstoppable offense. Over the course of this brief but devastating run, Penn State went from down only three points to suddenly finding itself in a 12-point hole. Only one of Michigan’s baskets during this stretch — the first one — came as a result of a half-court offensive set. Caris LeVert gets Penn State’s defense rotating with a cross-court pass to Glenn Robinson III after an on-ball screen by Jon Horford. Robinson takes his man off the dribble. Robinson draws the attention of Horford’s man, but instead of Horford cutting to the basket for the dump-off, he drifts baseline and hits a short jumper. Horford has shown he can hit those, but man that baseline looked open. After an inbounds play, Horford gathers a missed three by Stauskas and gets fouled on the putback. It’s worth noting how fortunate Michigan is to be playing two 70 percent free throw shooters at the center position. Horford has been around 70 percent his whole career, but Jordan Morgan so far this season has improved from a career 55 percent from the charity stripe.  It makes a huge difference. The next two baskets in the sequence is where things get really fun. On defense, Robinson shows great anticipation by picking off a pass to Ross Travis and going the other way, pushing the ball to LeVert for the and-1 layup. On the final play, LeVert gathers the rebound after a missed 3-pointer by DJ Newbill and throws the lob for Robinson, who slams it home.

4) DJ Newbill makes a late run almost by himself

If you’re a Nik Stauskas fan, look away — this sequence wasn’t pretty. DJ Newbill is a very good player, but Stauskas just has to be able to stay in front of his opponent better in one-on-one situations. It’s easier said than done, but there’s no getting around it: late in this game, he was a defensive liability until Beilein switched Glenn Robinson III onto Newbill in order to stop the bleeding.

“I thought Nik got really tired when they were making that run when he was matched up on Newbill,” Beilein said after the game. “He was just taking him. I told you, Philly guys can get buckets.When Glenn got on him and we got in some gaps, it was much more difficult.”

Newbill eventually cut the lead to eight with five minutes left, and it would have been fewer if Derrick Walton hadn’t come up with some big plays down the stretch. Penn State was able to score easier in the second half as opposed to the first — the Nittany Lions scores 1.05 points per possession in the first half, 1.2 in the second. Beilein elaborated on what Penn State did differently.

“In the first half, they ran a lot of screen-and-roll, a lot of action, and we guarded it pretty well,” Beilein said. “In the second half, they just spread the floor and did what so many people are doing, which is everybody just driving at you. They’re not going to call the charges like they used to, you’re going to get to the foul line, or you’re going to bail out. That was really effective for a while, but it wasn’t effective in the last five minutes.”

This basket could be regarded as the proverbial nail in the coffin for Penn State. As Beilein said, the Nittany Lions got shut down in the final five minutes of the game, making it easier for Michigan to pull away. And when you’ve been rolling off screens all night long, as Horford had been, it sets you up beautifully to slip a screen and be wide open moving toward the basket. Horford approaches the ball as though he’s going to set a screen, but instead cuts to the basket, where Stauskas finds him wide open for the dunk. We’ve been harping on this subject for a couple weeks now, but Horford and Jordan Morgan combined once again for a great game on Tuesday. The duo scored 19 points and nine rebounds and did its job: play defense, rebound and finish at the rim.

“They put pressure on the rim,” Beilein said of his two bigs. “The guy underneath — we call him the gutter — he’s in that gutter and he’s looking for a step across, he’s looking for anything. Obviously Jon hit a big shot today that he works on like crazy. What did we have, 17 points and nine rebounds out of them today? If we can keep getting those numbers, that’s really good for that position.”