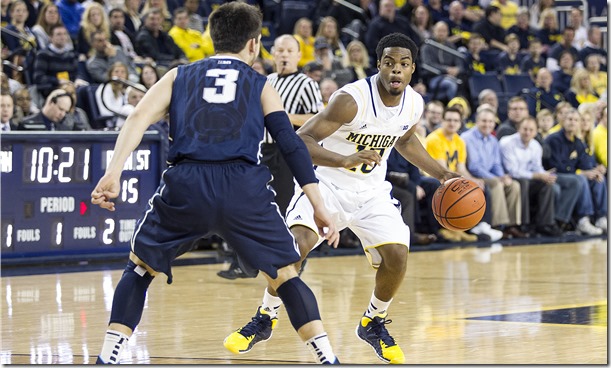 Michigan cruised to its sixth consecutive victory on Tuesday evening, topping Penn State by a final score of 80-67.

The Wolverine offense lost Trey Burke, Tim Hardaway Jr. and Mitch McGary, but is still among the most dangerous in the country – now up to No. 5 nationally in adjusted offensive efficiency.

Michigan shared the ball and had four players reach double figures, in arguably its most impressive offensive performance of the season. Nik Stauskas faced little resistance driving to the basket, finishing with a game-high 21 points on 12 shots along with five assists. Freshman point guard Derrick Walton added a career high 16 points on 6-of-9 shooting, and the Wolverines got a combined 19 points and nine rebounds from Jon Horford and Jordan Morgan.

But it’s the defense that’s going to cause the coaching staff to lose sleep in the coming weeks. Michigan struggled to stop a decidedly average offensive team for the second game in a row. The Wolverine defense was just picked apart by the No. 69 and No. 91 offenses in the country and will face the No. 3 and No. 4 most efficient offenses in the country in their next two games.

No win is a bad win, but the Wolverines will have their work cutout for them with games at Wisconsin, vs. Iowa, and at Michigan State in the next 10 days.

Michigan’s offense was nearly flawless, racking up 80 points on just 60 possessions. An impressive 18 of 28 of the Wolverines field goals were assisted and they shot 68% on twos, 38% on threes for a sterling 62.5% effective field goal percentage. This was a classic offensive performance on par with the Wolverines’ best conference performances last season. The Wolverines shot the ball so well that few other offensive stats mattered. Nik Stauskas almost single-handedly got Michigan into the bonus in the second half with 11:25 to play. The Wolverines only rebounded a modest 30.8% of their misses, but turned eight offensive rebounds into 15 second chance points.

The Wolverine defense took a sideways step at best. Penn State scored 1.12 points per possession despite turning the ball over on its first four possessions (just five times in the next 55 possessions). Michigan’s defensive effort was impressive in small bursts but lacked consistency. The Nittany Lions scored 43 of their 60 points on 22 possessions that spanned three woeful defensive stretches.

The Wolverines surrendered only 17 points on the other 38 possessions of the game, so they did manage to clamp down at times. However, just one four or five minute lapse in defensive effort will cost a game against a quality opponent.

Michigan’s defensive problems continued to originate around the rim. The Nittany Lions shot 62 percent on 2-point attempts and there wasn’t much of a secret to their success. Penn State gave the ball to DJ Newbill and Tim Frazier and let them attack the basket. Only eight of Penn State’s 26 field goals were assisted, but Newbill and Frazier combined for 34 points on 22 shots.

It’s no secret that Michigan’s opening Big Ten schedule has been soft. The Wolverines have two road wins, but have the weakest KenPom in-conference strength of schedule by a wide margin. Michigan’s first four games might have been the easiest stretch in the conference, but its next three might be the toughest. First up, a trip to Madison to face a Wisconsin team that John Beilein has beaten just once since arriving at Michigan.