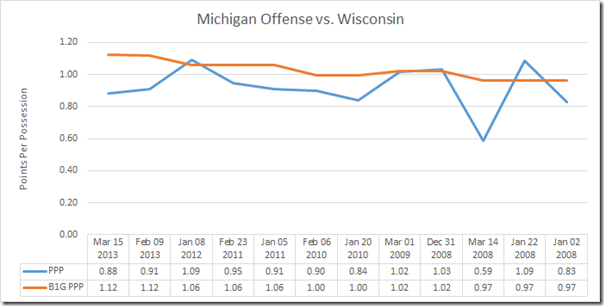 Michigan heads to the road to face the Wisconsin Badgers on Saturday night. The Wolverines have won six straight after losing four of their first ten games, but will face a much more difficult challenge in Madison. (Photo: Scott Mapes)

The game at Wisconsin is the first of three games – followed by Iowa and a trip to Michigan State – that are as difficult as any the Wolverines have played this season.

The Badgers suffered their first loss of the season at Indiana on Tuesday, but are still one of the primary players in the Big Ten Championship race. Here’s a first look at the Badgers and what to expect on Saturday.

It’s no secret that John Beilein has struggled against the ‘Pack Line Defense’. Beilein is just 1-11 against Bo Ryan, 0-1 against Tony Bennett at Virginia, and 0-1 against Sean Miller at Arizona.

In 12 games against Wisconsin, Michigan has scored 639 points on 697 offensive possessions, a dreadful .916 points per possession. The Wolverines have outperformed their conference scoring efficiency mark just three times in John Beilein’s tenure.

Wisconsin is generally a great defensive team, but Michigan’s inability to crack the Badger defense is something that just can’t be ignored.

Despite Michigan’s struggles against the Pack-Line defense, Wisconsin’s defense has looked vulnerable this season.

Indiana handed Wisconsin its first loss of the season on Tuesday at Assembly Hall thanks to an impressive offensive showing. The Hoosiers racked up 1.17 points per trip against the Badgers in the worst defensive showing for Bo Ryan’s program in a Big Ten game since March, 2012.

The Badgers clearly have some defensive issues to work out and their issues against Indiana stemmed from a failure to stop dribble penetration. Indiana was 28-of-48 on two point attempts and Yogi Ferrell (9-of-16 on twos), Will Sheehey and Stanford Robinson got to the basket at will.

Taking a look at footage from Tuesday’s game, Wisconsin’s Synergy Sports profile, Hoop-Math, and other sources, there are a few weaknesses that stand out.

Inside the Hall published a great piece on some of Wisconsin’s defensive shortcomings and one common denominator was the secondary break.

The Badgers grade out in the 80th percentile in transition defense, according to Synergy Sports, and 40th overall in eFG% allowed in transition. But the secondary break open threes that Wisconsin gave up to Indiana are the sort that Michigan loves.

Michigan will need to find opportunities in unsettled situations because scoring against the Badger defense in the halfcourt could prove more difficult.

The Badgers surrender .904 points per isolation play which ranks in just the 27th percentile nationally. Michigan’s isolation defense has been criticized quite a bit but the Wolverines grade out in the 87th percentile. The Synergy numbers say that Josh Gasser, Traevon Jackson and Frank Kaminsky are all below average to poor isolation defenders. Sam Dekker and Ben Brust grade out much better this season.

Both of those figures grade out in just the 41st percentile nationally.

Wisconsin also struggles to defend the low post. Opponents are scoring 1.02 points per post-up (including passes), which ranks in just the 21st percentile nationally.

Frank Kaminsky and Sam Dekker grade out as below average post defenders while Nigel Hayes has been a shade more impressive – and his play is trending upward.

The Badgers halfcourt offense is ranked in the 98th percentile nationally, scoring 1.036 points per halfcourt possession.

Wisconsin is a great spot up team (1.16 PPP, 94th percentile) and comfortable shooting the ball off screens (1.42 PPP, 98th percentile).

The Badgers have an impressive 62.4% eFG% on catch and shoot jumpers and 76% of their jumpshots are threes. Wisconsin is almost as effective against a zone defense as Michigan, scoring 1.36 points per trip against zone defenses (96th percentile).

The primary sore spots for the Wisconsin offense are in transition (1.01 PPP, 46th percentile) and in the ball screen game. The Badgers score just .873 points per pick-and-roll (including passes), which ranks in just the 55th percentile nationally.

In 2013, it was Ben Brust’s halfcourt shot to send the game to overtime.