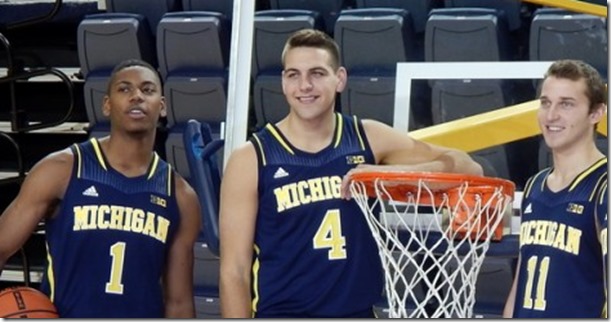 Glenn Robinson III, Mitch McGary and Nik Stauskas are all firmly on the NBA Draft radar. Where they rank is anyone’s guess.

Mitch McGary’s injury has obviously added question marks to his NBA Draft resume. He’s had very little chance to play (fully healthy) this season to back up his NCAA tournament performance and he most likely won’t get another one this season. The 6-foot-10 sophomore isn’t even expected to rejoin team activities for quite some time, focusing on recovery, class and rest.

Glenn Robinson III started the season in a slump but has stepped up with McGary sidelined, playing the best basketball of his career. Seen as a lock for the lottery last season, Robinson’s stock slipped a bit this fall. Still projected as a first-round pick by most, Robinson appears to have fallen closer to the later-third of the round.

Nik Stauskas is leading Michigan in points, assists and efficiency and has improved nearly every element of his game since last season. The 6-foot-6 sophomore has started to emerge as on the NBA radar – an early second round pick on many draft boards – after entering the season as an afterthought.

Here’s a roundup of the latest draft speculation and reports.

The newest 2014 Mock Draft from Draft Express features all three Wolverines: Glenn Robinson III at No. 20, Mitch McGary at No. 29 and Nik Stauskas at No. 33.

ESPN’s Chad Ford posted an updated mock draft which isn’t as favorable to the Wolverines with just one Wolverine tabbed in the first round, Glenn Robinson III at No. 28, down from No. 25.

Robinson is in the same boat with most of the other hyperathletic small forward wannabes on our Big Board. If only they could shoot. Alas, Robinson, like Gordon and Grant, can’t hit a shot right now and is stuck in tweener land until he develops a reliable jumper.

Brian (Chicago) What should Mitch McGary do if (when?) he misses the rest of the season after his back surgery? Go back to school or come out and hope to go late first round?

Chad Ford: He’s in a very tough position. If he had gone to the NBA last year, would’ve been a late lottery pick. Now? He’s going to slide. Not only do back injuries scare teams off (it’s why Jared Sullinger slid so far in the draft) but McGary turns 22 in June. If he waits another year, he’d be 23 entering the draft. While that sounds young to most, for NBA scouts, it’s like saying you’re 50.

Sports Illustrated’s Chris Mannix posted an updated mock draft as well. Mannix projected the top 20 spots in the 2014 draft and didn’t include a single Michigan player. McGary (18) and Robinson (20) were both included in his last draft board, but have slipped out of the top-20.

CBS Sports’ Gary Parrish also updated his draft board, featuring Robinson at No. 27

“It’s obvious that Robinson misses playing beside Trey Burke. But he’s still doing enough to hold his place in the first round of this mock draft.”

Robinson’s position held steady at No. 27, but McGary slipped from No. 23 to No. 30 due to his back surgery.

“McGary is likely out for the season following back surgery. At this point, it’s possible, he’ll never be drafted as high as he would’ve been drafted after last season.”

Stauskas is also listed by CBS, projected 47th overall. Parrish couldn’t miss out on the opportunity for a ‘not just a shooter reference’, but Stauskas fell three spots.

“Stauskas is a great shooter, but not just a shooter. He’s averaging 17-plus points per game for the Wolverines, and could turn pro after two years of college.”(Previous: 44)

NBA Draft.net has Robinson slotted at No. 11 in its most recent ‘extended mock draft’, and has Mitch McGary and Nik Stauskas projected in the second round of the 2015 Draft.

McGary’s back surgery has caused many to question his decision to school, but Mike Decourcy wrote a column defending McGary’s decision for the Sporting News:

McGary had shown an amazing collection of basketball skills in the tournament, from his jumpshooting to his passing against the Syracuse zone to his punishing board work and his all-out energy throughout every performance. NBA talent analysts – Chad Ford at ESPN.com, Jonathon Givony at DraftExpress.com – pegged him as a mid-first-round pick before any of the actual pre-draft testing and trials took place. Some had him as low as the 20s.

So spare him the “coulda-been-a-lottery-pick” nonsense. If he’d left last year, he probably would have been selected in the later portion of the first round, and that’s a tenuous position to be. It’s not so hard to slip out of the first round altogether.

McGary thought he was better than that, and it was not a small factor in his return.