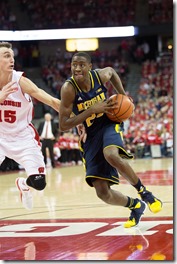 Michigan doesn’t have Trey Burke, Tim Hardaway Jr. or Mitch McGary, but it has Nik Stauskas.

On Saturday, Stauskas did what Michigan’s best players before him couldn’t, he walked out of the Kohl Center with a victory.

Michigan hadn’t won in Madison since 1999 and finally was able to close out a victory. The game showed all of the same signs of recent Wolverine collapses at Wisconsin. Michigan was held scoreless from 8:06 to 3:26, watching a 13 point lead disintegrate into a one possession game in a flash. But Nik Stauskas came through in the stretch, scoring the Wolverines’ final 11 points of the game.

John Beilein has called the 6-foot-6 Canadian’s number in winning time for most of the season and he answered the call again. Up one point with under a minute to play, Stauskas took the ball, dribbled between his legs, stepped back and buried a three over Nigel Hayes. Ball game.

Stauskas iced the game out at the free throw line as the Wolverines held onto a 77-70 victory.  Wisconsin is the highest ranked team that Michigan has beaten on the road in program history. The last time the Wolverines beat a top-five team on the road was in 1964 – when Cazzie Russell was a freshman – and this was easily Michigan’s most impressive road win since January 27th, 2011 at the Breslin Center.

Michigan’s offense was nearly unstoppable for the first 30 minutes of the game. Despite a four minute scoring drought late in the second half, the Wolverines tallied 1.15 points per trip, on the road against a top-five opponent. This offense – leading the Big Ten at 1.19 points per trip – is legitimate, even if there are new faces carrying the load.

Wisconsin had no answer for Michigan’s side ball screen and dribble hand off action. Caris LeVert and Nik Stauskas combined to score 43 points and handed out eight assists, the majority of which came from the same set. The Badgers played with a soft hedge and let Michigan’s wings operate in the middle of the floor, giving the Wolverines the 16-foot jump shot. There was no secret to Michigan’s success, the Wolverines did what they always do and Wisconsin couldn’t stop them.

Stauskas, LeVert, Robinson and Irvin all scored off the high ball screen while Morgan and Horford finished effectively (6-of-6) on rolls to the basket. Wisconsin dared LeVert and Stauskas to beat them, they did.

The Wolverines still have some defensive issues to correct, but their performance wasn’t awful. The Badgers scored 1.05 points per possession which is a better defensive effort than Michigan’s last two outings (against far worse offenses). More importantly it was Wisconsin’s worst offensive effort since December 4th against Virginia. There were occasional breakdowns, but the Wolverines controlled the defensive glass, forced a few critical turnovers and held Wisconsin to 46% shooting inside the arc.

This was Michigan’s third Big Ten road win in three tries, an impressive feat considering that last year’s team  won just four games on the road in the Big Ten. Michigan is now up to 13th nationally in Ken Pomeroy’s rankings and should be flying high, tied for first in the conference, going into a very difficult week with a home game against Iowa and a road trip to East Lansing.