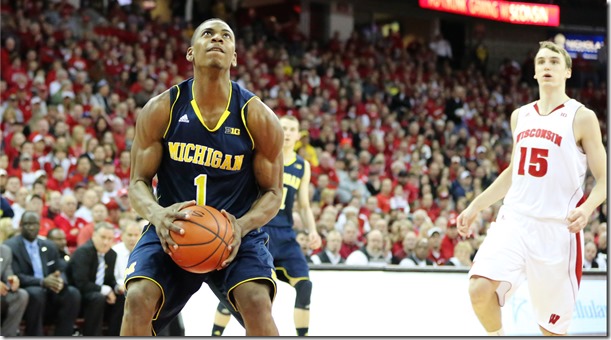 Michigan’s recent history against Wisconsin is, in a word, depressing.

John Beilein is 1-11 in his Michigan career against the Badgers. Those 11 losses include two heartbreakers: one occurred in 2011, when then-freshman Josh Gasser hit a bank shot at the buzzer; the other took place last season, when Ben Brust hit a half-court buzzer-beater to send Michigan into overtime at the Kohl Center. The Wolverines later succumbed, 65-62.

Beilein mentioned that shot during his press conference on Friday, recalling what he learned from his experiences against Wisconsin in past years.

“You can’t be a perfect coach and you’re going to make mistakes in your preparation,” Beilein said. “There are so many situations you have to prepare for. So that last-minute shot right there? There wasn’t too many things we did well on that last second play. Now, they still had to make a half-court shot. But we’d love to have that timeout back again to make sure we did it better.”

Unfortunately for Beilein, reversing the progress of time isn’t an option. A more modest goal would be to defy recent history between the two teams by stealing a win in Madison. Wisconsin has owned Michigan over the past eight years, especially at the Kohl Center — the Wolverines haven’t won a game in Madison since 1999.

In Michigan’s favor is the fact that this is not an altogether familiar Wisconsin team. The Badgers are very good, but what is usually a strength — defense — has been exposed as somewhat of a weakness this season. Last year, Wisconsin held the best statistical defense in the country. This year, the Badgers rank 24th in the nation and fourth in the conference. They aren’t horrible on the defensive end by any stretch, but they aren’t their usual dominant selves, either.

Wisconsin’s offense is a different story. There, the Badgers really have been dominant — they’re scoring 1.2 points per possession, good for the most potent offense in the Big Ten.

“This is their best shooting team, overall. Five guys shooting it,” Beilein said. “When they had … (Jon) Lueur, they had the shooting four and five. But they didn’t have the downtown stickers at the two and the three as much as they have now. They have five guys who can shoot it, five guys who are posting up, five guys who can play defense, five guys that pass it. It’s difficult to defend them.”

Beilein’s right — Wisconsin is shooting a ton of threes (almost 40 percent of its shot attempts come from beyond the arc), and everyone is getting in on the act. Frank Kaminsky, the five man, has taken 44 threes, which is second-most on the team. During the press conference Friday, Jordan Morgan addressed some of the keys to guarding a seven-footer who can shoot.

“I think with a guy like him, it’s really important to just be engaged,” Morgan said. “You can’t lose him. He’s too deadly a shooter on the outside. We’ve seen it already this year. He can get it going. When that happens, it can be trouble for our whole team. With him, you’re staying connected, staying engaged all game long, making him take tough shots and keeping him from getting in a rhythm.”

Offensively, it’s up to Michigan to take advantage of a Wisconsin team that has shown some weaknesses on the defensive end. The Badgers guard the 3-point line extremely well, and it’s likely that many of the shots the Wolverine shooters are used to seeing simply won’t be there.

For a pick-and-roll team like Michigan, the Badgers simply force the two players directly involved in the action to beat them — they refuse to help off the shooters on the perimeter.

“They have a unique way of playing where they just kind of, they make it really hard for your shooters to get open and they just make whoever’s coming off the ball screen and the big guy kind of just beat you,” Morgan said. “It’s going to be on us to finish when those opportunities are presented to us. Like you said, trying to get those extra possessions. Those will be big.”

Michigan hopes it can shake up the dull monotony of what has almost become an annual sign of the new year — you know it’s January in the Big Ten when Michigan is losing a heartbreaker to Wisconsin. A win at the Kohl Center, with the Badgers still high up in the rankings despite a loss on the road to Indiana, would be a particularly audacious way to buck the trend.

Morgan mentioned that he’s only beaten Wisconsin once in his career as a Wolverine. When asked if he feels the need to take revenge on the Badgers, he chuckled.