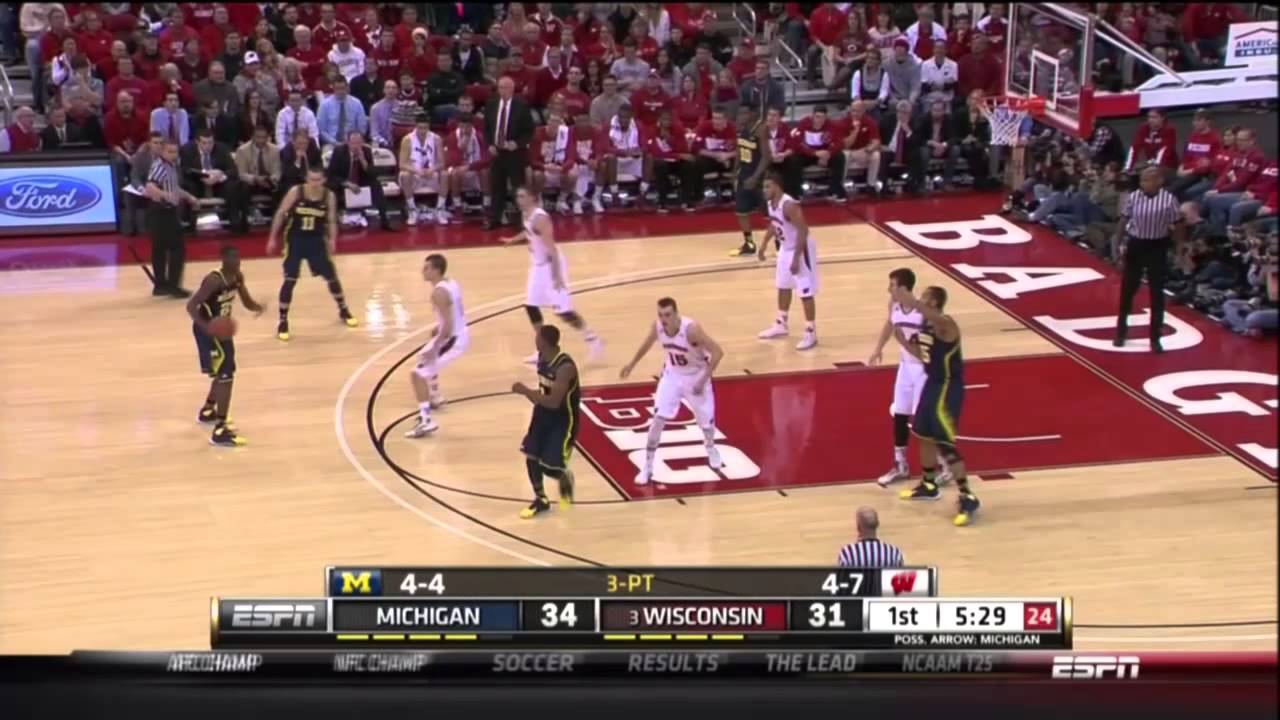 Dylan went over Wisconsin’s trouble guarding the ball screen ad nauseam prior to last night’s 77-70 victory over the Badgers in Madison. True to form, Wisconsin couldn’t stop Michigan, whose offense is largely predicated on ball screen action. For the most part, a Michigan ballhandler has four options when running the pick-and-roll: pull up for a jumper, take the ball to the rim, hit the roll man, or hit a shooter on the perimeter whose defender is helping. Wisconsin consistently took away two of those options — attacking the rim or kicking out to a shooter — but failed to stop the other two — midrange pull-up and hitting the roll man. Michigan was incredibly well prepared to execute these two options, a testament to the coaching staff. On the first play, we see one characteristic of Michigan’s ball-screen action on Saturday, which was hitting the big man very late in the action. The key to this play is patience — both from Nik Stauskas and Jon Horford. Horford screens John Gasser and rolls to the basket, with Frank Kaminsky still shadowing him while preventing the drive by Stauskas. Stauskas waits until the last second — when Kaminsky finally commits to help as Stauskas leaves his feet — before hitting Horford with a great pass for the dunk. Tremendous individual effort by Stauskas, and good awareness by Horford knowing to stay ready for a pass late. Caris LeVert talked about the importance of the bigs sticking with the action deep into the play:

“We really practiced that a lot this week in practice, and they really did a great job of staying connected with us, rolling deep in the paint, catching and finishing,” LeVert said after the game. “I think that showed today.”

Later, Stauskas goes with the other option that was there all night: the pull-up two. Morgan screens for Stauskas as he hand him the ball, and we can see Wisconsin’s priorities with Kaminsky playing a good three feet off the ballhandler — stop the drive, let him hit the long two. Stauskas just makes them pay. Finally, LeVert gets in on the action, but there is nothing you can do about that shot. Ben Brust and Kaminsky essentially switch the screen by Horford, and LeVert hits a rainbow floater over the 7-footer.

2) Michigan kicks off second half with 8-2 run

The Wolverines were almost flawless in the first half — 1.21 points per possession with an effective field goal percentage of 68 — but they found themselves only up five points. That changed in the beginning of the second half, as Michigan didn’t let up on offense and shut down the Badgers effectively on defense. The Wolverines held the Badgers to just seven points on the first 13 possessions of the latter frame, which allowed their lead to balloon to 15 points. This sequence shows how Michigan stretched its five-point lead to 11 in the first five minutes of the second half. The first play should look familiar, as Kaminsky is once again sagging far off Glenn Robinson III coming off a Jon Horford screen. Robinson simply rises up and hits the open free throw-line jumper as Sam Dekker switches onto Horford. On the next play, Derrick Walton shows impressive physicality, bullying Brust all the way to the rim off the pick-and-roll. Later, Kaminsky actually elects to guard Stauskas off the ball screen, but Stauskas hits the long two over him anyway. At the end of this play, Jordan Morgan gets whistled for fouling Josh Gasser. Morgan would get his revenge later in the game, when Gasser was called for a hold while fighting for rebounding position. Finally, Jon Horford hits a nice fadeaway jumper in the post, one of a few post-up moves he’s become reliable on. Michigan was up 11 by the end of this run and on their way toward establishing some serious breathing room between itself and Wisconsin. The Wolverines would need all of it by the end of this one.

Starting with this possession, Wisconsin scored on five straight possessions, while Michigan fail to score. That spells a game-changing run. In this clip, the Wolverines go from being up 13 and in control of the game with just over six minutes remaining to being locked in a dogfight, ahead by only three with four minutes left. On the first play, the Badgers employ something Michigan itself loves to take advantage of: a trailing three on the secondary break. Caris LeVert sees a midrange jumper go in-and-out, then unfortunately loses his man (Gasser) running back on the other end. Glenn Robinson III stops ball (Traevon Jackson) and it looks like there’s a mix-up between Robinson and LeVert that leaves Gasser wide open. Transition defense: it hasn’t been good all year. On the next play, Zak Irvin winds up guarding Frank Kaminsky, and Kaminsky makes a great move in the post for the lay-in. It seems like the better match-up would have been to have Jon Horford on Kaminsky and Irvin on Nigel Hayes, a fellow freshman. Later, Hayes hits a baseline jumper over Horford. Finally, Hayes makes another great play. After getting the ball in the post with Nik Stauskas guarding him, Horford helps down all the way from the 3-point line. Hayes sees this and kicks out to Kaminsky at the top of the key. Kaminsky hits, and Wisconsin is within three points.

Glenn Robinson III described the message at halftime like this:

“Just stay focused,” Robinson said. “We always address that at halftime. Play like it’s 0-0. If I’m not mistaken, I think we were up like that last year, also going into halftime. They’re a team of runs, and they’re also a second half team. We just wanted to stay focused, stay composed and play our basketball.”

For the first 10 or so minutes of the second half, Michigan did just that. However, it was in the final 10 minutes that the wheels came off and the team started melting down. After a seemingly endless procession of missed jumpers, and with their defense failing them, the Wolverines needed someone to step up with the Kohl Center rocking. Stauskas’s shot at the 3:27 mark was like twisting a pressure release valve on the game for Michigan. It allowed them to step back from the impending reality that they were going to be locked in a close game with Wisconsin on the road again and just play ball in the final minutes.

Nik Stauskas is having an incredible offensive season, and this shot was his signature moment to date. It was the biggest shot of the sophomore’s young career, and one of the biggest in program history as the shot that solidified the a win over the highest-ranked opponent opponent Michigan has ever beaten on the road. As the game announcer’s voice blared over the loudspeaker to announce there was only one minute remaining in the game, Stauskas received a pass from Caris LeVert at the 3-point line with Nigel Hayes draped over him. Stauskas fakes the drive with a positively sick crossover (go to the 18-second mark to see just how bad Stauskas got him), steps back and buries the three with ice in his veins.

That word, “aggressive,” kept popping up in the post-game press conference. At the end of the game, John Beilein challenged his team to be aggressive and said anyone who doesn’t want to shoot the ball can get out of the game. Nik Stauskas wanted to shoot, and he did.