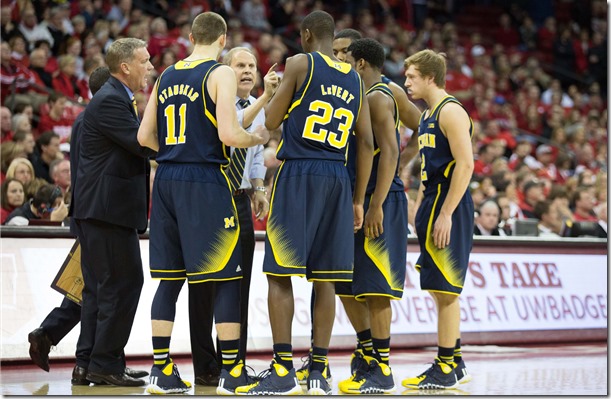 MADISON, WI — John Beilein has made it a habit, during the course of his eight years as Michigan’s coach, to accomplish things the Wolverines haven’t seen done for a long time. When Michigan beat Michigan State in East Lansing in 2011, it was the first time since 1997. When the Wolverines went to the Final Four last season, it was the first time since the Fab Five did it in 1993.

Given the trend Beilein has established of breaking hexes that have plagued Michigan for years and years, it was only a matter of time before the Wolverines, under Beilein, broke the streak of road losses to Wisconsin that dated back to 1999. On Saturday night in Madison, Michigan finally shrugged the proverbial monkey — er, Badger — off its back en route to a particularly redemptive 77-70 victory at the Kohl Center.

See, this was supposed to happen last year. Last year, Michigan had a Player of the Year in Trey Burke, a first-round NBA draft pick in Tim Hardaway Jr. and a healthy, though freshman, Mitch McGary. Michigan was ranked fourth in the country — Wisconsin, 14th. Hardaway hit a 3-pointer with 2.2 seconds left to put Michigan up by three.

But we all know what happened next. And Michigan went another year without a win in Madison.

This season, it felt less likely that the Wolverines would be able to buck the trend. They came into the game unranked, while Wisconsin was ranked 3rd. The Badgers had just lost a tough game at Indiana but were looking to bounce back at home. Michigan entered the game without a signature road win against a ranked opponent on the season.

And yet, this was the year. Michigan played almost flawlessly on offense for 30 minutes, gutted out the final 10, and made big shots on its way to beating its highest-ranked opponent on the road in program history.

During his post-game press conference in the bowels of the Kohl Center, John Beilein evaded questions about the significance of Saturday night’s win like a prizefighter dodging jabs. The coach is known for his tunnel vision in-season — it’s all about the next game, and there’s still plenty of season left. But even Beilein took a moment to step back after this one.

“For us to just beat Wisconsin, any time, with the way they’ve run their program and how well they run their program, the quality kids they have, their staff — it really feels good for our staff and for our team,” Beilein said. “We got a lot of work to do, but we’re going to enjoy this one for a few hours. We really feel good because of who we were just able to get a victory over.”

This win is special for Michigan as a program, but it’s also special to get a win like this early in the conference season. This was a show-me game for the Wolverines. As Beilein admitted during the press conference, Michigan had not gone up against the Big Ten’s best teams during its 4-0 start. This game was a big step toward proving that the Wolverines are a true contender in the conference. After losing its other opportunities — at Iowa State, at Duke — Michigan finally has a win on the road that indicates it is for real.

It didn’t come easy. For a second, it looked as though the Wolverines, improbably, would win going away — Michigan was up 13 points with a little over six minutes to play. But anyone familiar with the history between these two teams knew that wouldn’t be the case. Wisconsin fought back with a late run that brought the deficit to within one. The Wolverines’ offensive attack, which had been deadly efficient all night, was suddenly flailing.

Beilein saw that his players were struggling. So he challenged them.

In the end, it was Nik Stauskas. Michigan’s sophomore is a bona fide offensive star, with the most complete game in the Big Ten. Stauskas hit two enormous shots — one with about three minutes left that stemmed a relentless run by the Badgers, and a beautiful step-back three with just under a minute remaining to seal the game.

No matter how much Michigan denied it in the days leading up to the game, last year’s heartbreaking defeat weighed on them. Stauskas admitted as much after the game.

“After the loss we had last year, when we thought we pretty much had that win, for them to come back and beat us, it feels good to come back here and get a win this year,” he said.

Even Beilein, who is loath to be overly dramatic following a win of any magnitude, had to admit that Michigan exorcised some demons in Madison on Saturday. It was relief, mixed with a little redemption.

“I use the word redemption a little bit,” Beilein said. “These guys walked into there and I’ve walked into locker rooms before and it haunts you every year about what happened on the road against a certain team, and I thought our guys came in here saying that this is a really good program, number one, and we are going to make up for the loss last year by doing everything we can. And they really played with that type of sense of urgency. So I think it affected our guys, our returning guys, it certainly affected them, but I like the way they responded. Obviously it was very positive.”