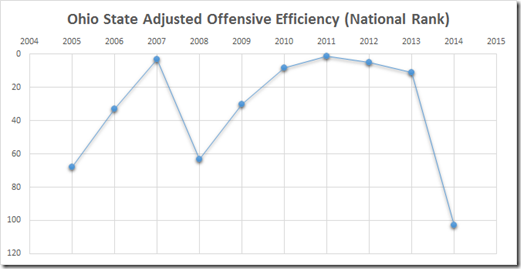 The Big Ten Roundup has been replaced with Big Ten Power Rankings this year at UM Hoops. We’ll take a look across the conference on a weekly basis, rank all 12 teams and attempt to provide some insight about each team.

Adreian Payne has missed Michigan State’s last three games with a foot sprain, but the Spartans are still the class of the conference.

The 6-foot-10 senior is probably the key to the Spartans’ long-term success, but other players have stepped up including Kenny Kaminski. Kaminski played just 29 minutes in Michigan State’s first 11 games due to multiple suspensions, but has emerged as a bona fide three-point shooting threat as a stretch-four. Kaminsiki is 13-of-21 from 3-point range in Big Ten play and is the best catch-and-shoot player in the conference with at least 20 attempts (Stats from Synergy Sports).

Iowa is one of the best transition teams in the country (see last week’s rankings) and over a quarter of their points have been scored in transition. But the Hawkeyes also get to the free throw line as often as any team in the league. Iowa attempts 57.6 free throws per 100 field goal attempts in Big Ten games, best in the conference by a wide margin, and has a number of players capable of getting to the free throw line. In Big Ten games, Aaron White, Mike Gesell and Roy Devyn Marble all rank in the conference’s top-10 in individual free throw rate. No other school in the conference has more than one player on that top-10 list.

In the Big Ten, success is typically just as much about who you play as how you play. The schedule can pose monumental challenges, especially on the road at some of the conference’s most feared venues. With an unbalanced slate featuring four single plays, schedule strength plays a definite role in the eventual champion.

The following graphic attempts to visualize the schedule strength in the conference, and how difficult certain stretches can be. Every scheduled game was conditionally formatted by KenPom ranking with an extra weight of .5 given to road games. The results help show trends and which teams have over or underachieved thus far.

Michigan has two of the more difficult stretches that anyone will face in the conference. The Wolverines have played one game in the first of two brutal stretches of schedule. Games against Iowa and at Michigan State will wrap up the first one, then after a brief lull the Wolverines will play at Iowa, at Ohio State and host Wisconsin and Michigan State in a four game stretch.

Wisconsin suffered two losses after heading into the week undefeated and ranked No. 3 in the country. The culprit for the Badgers’ demise was defense. Wisconsin surrendered 152 points in 132 possessions – 1.15 points per trip, a mark that’s horrific by Bo Ryan’s defensive standards.

Wisconsin struggled because it came up against two of the best ball screen players in the league: Yogi Ferrell and Nik Stauskas. Bo Ryan’s ball screen defense is designed to take away the rim, but it’s leaving the mid-range jump shot wide open. The following chart charts show that trend (circled shots are makes).

Michigan saw a weakness on film in the Indiana game and prioritized it in its gameplan. The Wolverines attacked the mid-range far more aggressively than Indiana, but both teams knocked down their fair share of mid-range jumpers.

Ohio State went 0-3 in a very difficult stretch of schedule, but has a chance to bounce back with four manageable games on the docket. The Buckeyes are a great defensive team – although Michigan State and Iowa have better defensive numbers in league play – but just can’t score the ball. Ohio State’s offense has managed just 1.03 points per possession, the seventh best offense in the league, to this point.

That’s rare territory for the Buckeyes under Thad Matta. Matta’s Ohio State teams have only ranked worse than 50th nationally in adjusted offensive efficiency twice, in 2005 and 2008 – the only seasons that Matta didn’t make the NCAA tournament.

Minnesota’s defense is an all-or-nothing proposition. The Gopher defense was great against Ohio State, Penn State and was okay against Michigan. But against Purdue, Michigan State and Iowa, the Gophers fell flat on their face. Most recently, Iowa shredded Minnesota to the tune of 1.32 points per possession   – the second worst defensive performance by any team in the Big Ten this season.

It’s tough to know what to make of the Boilermakers. They have done about what would be expected for a team in the middle of the conference, but picked up a surprising win at Illinois on Wednesday. Does that say more about Illinois or Purdue? Right now it’s tough to tell. Purdue isn’t a great shooting team, but its offense is surviving thanks to league leading offensive rebounding. 6-foot-5 freshman Basil Smotherman has been a pleasant surprise and ranks second in the league in offensive rebounding rate through three weeks of play.

How do you lose at home to Northwestern? Brutal half court offense. The Hoosiers made just six shots away from the rim against Northwestern – all game. Indiana loves to run, but is the least efficient team in the Big Ten in transition. The Hoosiers need to figure out an identity in the half court. The numbers say that should be Yogi Ferrell with the pick-and-roll, but other options will need to emerge.

The Illini offense has mustered just .96 points per possession in Big Ten play, third worst in the conference. Things are crumbling quickly for a team that many thought would contend for a NCAA tournament bid after entering conference play at 11-2. The Illini  haven’t topped a point per possession since January 4th and haven’t managed an effective field goal percentage over 50% since December 10th.

Northwestern has a historically bad offense, ranked 318th nationally in adjusted offensive efficiency and scoring just .84 points per possession in Big Ten play. The worst Big Ten offense since in the last 11 years was Penn State in 2004 – the Nittany Lions still scored .90 points per trip and ranked 268th in adjusted defensive efficiency. The Wildcats are on pace to surpass that level of offensive ineptitude.

But this isn’t Bill Carmody’s Northwestern, the Wildcats can defend. Northwestern stymied Illinois (.74 points per trip) and Indiana (.74 points per trip) en route to a pair of Big Ten victories. Those were the worst offensive performances of the season for the Hoosiers and Illini. They were also the second and third best in-conference defensive performances by any team in the Big Ten this season, a sign that Chris Collins might know a thing or two about coaching defense.

I really think there are brighter days ahead for Nebraska. The Huskers came close against Michigan but, looking at the schedule graphic above, they should have some winnable games coming up. The Huskers have played the most difficult schedule in the league thus far and have three games this week: Ohio State at home tonight, at Penn State Thursday, and home against Minnesota on Sunday.

Penn State is so close, but its record still reads an ugly 0-6. The Nittany Lions lost their third Big Ten game by one possession at Purdue on Saturday, but have a prime opportunity to grab their first conference victory against Nebraska on Thursday.