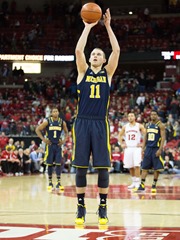 Sports Illustrated profiles Nik Stauskas’s emergence and his father chimes in on his NBA Draft prospects.

Once the desire to renovate his mentality and his body set in, everything came fast — including, as it happens, recalibrated plans. Stauskas and his family wondered what people were missing about his capabilities for so long. Now, the hunger to demonstrate those capabilities this season might inspire a much shorter wait on future opinions elicited from, say, NBA executives.

“He sees the brass ring, like three inches away from his nose,” Paul Stauskas said. “He knows all he has to do is keep his nose to the grindstone for another couple of months, and there’s a really good possibility he might be able to go pro. He’s working really hard to achieve that.”

Stauskas is projected as an early second round draft pick.