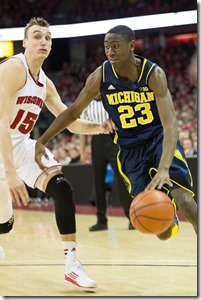 Iowa is an anomaly. In a conference known for knock-down, drag-out basketball, where possessions are valued chiefly because of their general scarcity, the Hawkeyes have taken a different track this season: they’re speeding up the game. (Photo: Chris Smith)

With an adjusted tempo of 73 possessions per game, Iowa ranks 13th in the nation in pace and is the fastest team in the Big Ten. The Hawkeyes play fast, and they play smart. Taken together, those two qualities have secured them the third-most efficient offense in college basketball.

During a press conference on Tuesday, John Beilein said he was unsure how Iowa’s pace would affect the game.

“With the pace of the game and TV timeouts, you never know where that pace can go,” Beilein said. “We’ve been very good at running as well. It could come into play. Hopefully we’re in good enough shape. We’re certainly not as deep as they are.”

He makes a good point: Michigan has been very efficient on the fast break. However, the Wolverines don’t run nearly as often. You can check out the graph Dylan put together in our First Look at the Hawkeyes for an idea of how pace and efficiency breaks down in the conference.

Speaking on Iowa’s experience, Beilein compared their team to one the Wolverines just beat on the road — Wisconsin.

“It’s very much like what we’ve seen with Wisconsin for years,” Beilein said. “They have the three seniors — McCabe is like a Zack Novak on that team. He’s an all-star quarterback, he’s going to get every loose ball. And Marble, when we saw him he was so young. He was a young birthday, and he’s gotten better and better every year. Those three have just been terrific.

“Aaron White (also), they’ve gotten an opportunity to play really early, just like Tim, just like Trey. All those guys got to play very early and that allows them to get better. He played very early because there was this void. And now that maturation shows in how good they are.”

Beilein harped on Iowa’s versatility, comparing Marble to former Ohio State Buckeye Evan Turner and marveling at White’s skillset which features running hook shots, dunks in the lane and everything in between.

It remains to be seen what Michigan will do about the pace. The Wolverines could conceivably run with Iowa, but it would likely be best for them to dictate the pace of the game at home. If Michigan is somehow able to shut down some of Iowa’s transition opportunities — something it hasn’t been good at this year — and play at its own pace, the Wolverines should be able to score on the Hawkeyes with their Big Ten-best offense.

Michigan’s offense has been effective in transition itself, and Beilein expressed full confidence in the Wolverines ability to push the ball on offense.

Another area where Iowa has been effective is offensive rebounding. Olaseni and Basabe are especially effective on putbacks, and the Hawkeyes possess the Big Ten’s third-best offensive rebounding percentage. They send four guys to the boards, and Michigan will have its hand full needing to box out as a team.

“They get stretch rebounds, they send guys to the boards, it’s going to be difficult to keep them off there,” Beilein said. “Because they’re coming at you in droves, too. It’s so much of a transition game. It’s really hard to block out in transition. You’re getting back, you’re getting back, and all of a sudden the shot goes up and you’re trying to find someone in a second. It’s really hard to do.”

However, Beilein also noted that this strategy, if Michigan can get some defensive rebounds, lends itself to run-out opportunities for the Wolverines.

“We’re going to have to not only box out, but don’t leak out, get possession with two hands, then if they crashed all those guys to the boards, then you should have an advantage to go the other way,” Beilein said. “Pick your spots, run really fast the other way and get easy hoops.”

When Michigan can’t get transition opportunities, it will rely on its bread and butter: the pick-and-roll. The Wolverines were incredibly effective in their trademark set against Wisconsin, but Iowa employs pretty much the opposite strategy to the Badgers’. It works to eliminate the ballhandler’s ability to make a play, where Wisconsin basically dared them to.

The Hawkeyes boast the best pick-and-roll defense in the country, and one of the reasons for that is they tailor their approach to defending it to the teams they play. Beilein said he won’t know exactly how Iowa will defend Michigan’s particular brand of ball screen action until the game tips off Wednesday night.

“They’ve varied what they’ve done. They’ve come out and hard hedged a lot, and they’ve also played off a little bit. That’s the first five minutes of the game, you don’t know how people are going to play you,” Beilein said. “You have a sense for it and you practice it, but you got to be able to adjust to it. Now, we had forty minutes of the sagging pick-and-roll defense the other day. I think we know if we have to go to there, some of the things we’re looking for. But the hard (hedge) that they may give to us, we’ve seen it before. They’re just really good at it and we’re going to have to execute against them.”