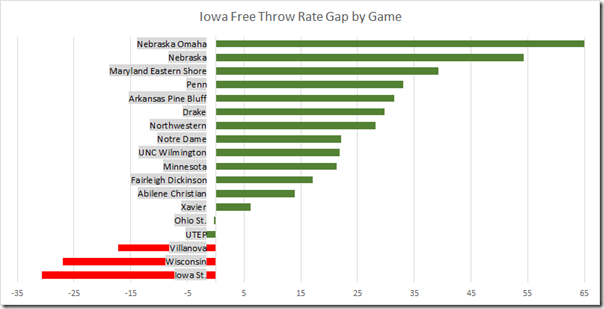 Iowa has almost the same roster it had last season, but the results are vastly improved. You might remember last year’s Hawkeyes. They were a good team, but they couldn’t beat any great ones, even at home. Their only game against Michigan was 95-67 drubbing in Ann Arbor at a time when the Wolverines were surging toward the No. 1 ranking and Iowa was crashing back to earth early in Big Ten play.

The Hawkeyes built off last year’s NIT run and are  ranked in the top ten for the first time since 2002. They finally picked up that quality win, at Ohio State, that they couldn’t get last year and have only lost to Villanova, Iowa State and Wisconsin – all at road or neutral sites.

Iowa has more talent than it knows what to do with, runs the court, and crashes the glass. While the recognition might not have been there in the preseason, the Hawkeyes are without question a contender for the Big Ten Championship.

Iowa is the No. 5 ranked team in Ken Pomeroy’s metrics, featuring the third most efficient offense, 28th most efficient defense and 13th fastest tempo. Iowa hasn’t played a Big Ten game slower than 70 possessions, Michigan has played just one conference game faster than 61 possessions – its 68 possession win at Wisconsin.

The Hawkeyes are fairly balanced offensively, ranked 58th or better on the season, and fourth or better in conference play, in all four of the four factors this season. Iowa shoots 49.5% (5th) on twos, 40.3% on threes (1st) for a 52.1% effective field goal percentage (3rd) in Big Ten games. Those are solid shooting numbers, but it should be noted that just 24% of Iowa’s field goal attempts are threes, the fewest in the conference. Iowa rebounds over 35% of its missed shots and is one of the league’s elite offensive rebounding teams. The Hawkeyes crash the glass hard and have frontcourt loaded with aggressive offensive rebounders.

Iowa gets to the free throw line more often than any Big Ten team, attempting 57.6 free throws per 100 field goal attempts. But while free throws are Iowa’s strength on the offensive side of the ball, they’ve been the Hawkeyes downfall on defense.

The graph shows that the three games where Iowa lost the free throw battle by a decisive margin were also three games that it lost this year. All three of those teams were able to get to the free throw line often – with free throw rates above 47% – and Villanova and Iowa State did the best job of keeping the Hawkeyes off the charity stripe of anyone this season.

The rest of Iowa’s defensive profile is solid. Big Ten opponents are shooting 42.7% on twos (2nd) and 31.7% on threes (6th) in conference play for a 44.4% effective field goal percentage – second best in the league. Iowa’s length and size yield an effective defense at the basket, but also a defense that can defend 2-point jumpers. Hawkeye opponents are shooting just 29.6% on two-point jumpers, 30th nationally. The Hawkeyes are solid on the defensive glass and force turnovers on 19% of Big Ten opponents’ possessions, third best in the league.

Iowa’s personnel can be broken down into three categories: guards, jumbo wings, and big men.

Roy Devyn Marble leads the Big Ten in scoring at 19 points per game (B1G) and he uses 28% of Iowa’s offensive possessions. Marble isn’t the most efficient player but he’s improved every season at Iowa. He’s shooting 44% on twos, 37% on threes and is turning the ball over less often than any point in his career, he also shoots  a free throw for every two field goal attempts. Marble hit three triples in the first 2:05 of the second half against Minnesota, turning a Minnesota lead into an Iowa blowout.

Mike Gesell is a good passer and can run the offense, but most of his scoring comes via the jumpshot rather than attacking the basket. 6-foot-5 guard Josh Oglesby is another shooter off the bench that knocked down 5-of-7 triples against Minnesota, but missed most of the start of the season.

The ‘jumbo wing’ contingent features Aaron White, Jarrod Uthoff and Zach McCabe. Uthoff shoots 57% on twos and 52% on threes while White shoots a ridiculous 69% on twos and 33% on threes. White is one of the most underrated players in the conference and he can play in transition, with his back to the basket, or facing up and attacking in the half court. McCabe is more of a glue guy and hustle player that shoots 42% on twos and 35% on threes.

Down low, Iowa rotates through a stable of big men that includes Adam Woodbury, Melsahn Basabe and Gabriel Olaseni. Woodbury starts but has only played more than 20 minutes in a game once this season. Olaseni and Basabe are big weapons on the offensive glass. Woodbury and Basabe are the primary threats posting up as Olaseni is 0-of-10 on post up attempts this season.

There are three statistics that will tell the story when this game is finished.

Ken Pomeroy gives Michigan a 58% chance at victory, projecting a 78-76 Wolverine victory.  Pomeroy’s FanMatch system rates the Michigan-Iowa as the most appealing game to watch for the rest of the season.