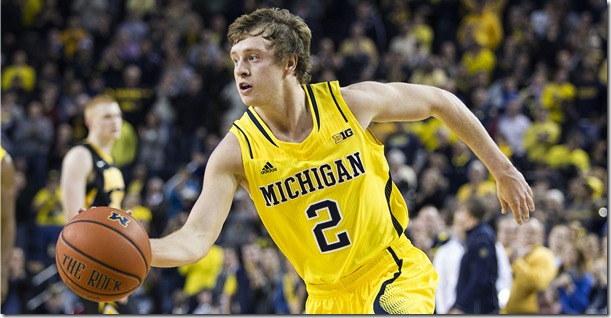 Michigan just keeps on rolling. The Wolverines reeled off their eighth straight win, and second in a row over a top ten opponent, with a comfortable 75-67 home victory over Iowa on Wednesday night.

Starting point guard Derrick Walton played just three minutes due to flu-like symptoms while Mitch McGary returned – to the bench in street clothes. But Michigan keeps getting better, clearly playing its best basketball of the season.

Iowa played neck-and-neck with the Wolverines for the first 20 minutes and never folded, a stark change from last year’s matchup. The Hawkeyes made a late run after Michigan stretched its lead to double digits, but the Wolverines just had all the answers.

In the first half, Nik Stauskas played like a pro – answering Melsahn Basabe’s dunks and layups with step-backs, threes and dazzling crossovers.  In the second half it was spot-starter Spike Albrecht and sixth-man Zak Irvin that stepped up to provide an offensive boost.

Iowa’s offense had garnered significant hype for its depth, pace an efficiency leading into the game, but Michigan beat the Hawkeyes in just about every stat they were supposed to control.

Next up is a battle for first place in the conference on Saturday in East Lansing against No. 3 Michigan State.

Michigan’s offense started just a bit shaky and fell in love with the three late in the second half, but still scored 1.13 points per possession. Only Notre Dame has scored more effectively against the Hawkeyes this season, and the Wolverine offense was effective despite poor shooting games from Caris LeVert and Glenn Robinson III. Michigan opened the game with 4 empty possessions and went six of seven possessions without a basket midway through the second half, but scored 73 points in the other 55 possessions of the game – 1.32 points per trip.

The Wolverines shot 61% on twos (shockingly slightly below their Big Ten average) and just 29% on threes, but Fran McCaffery deserves credit for rolling out his 2-3 matchup zone. The Wolverine offense sputtered against the zone, which resulted in 62% of Michigan’s second half field goal attempts coming from behind the arc. Michigan’s offense is up to No. 3 overall in Ken Pomeroy’s adjusted offensive efficiency numbers and statistically there’s very little separating this offense from last year’s team.

Defensively, Michigan was great through the middle 20 minutes of the game and that turned out to be enough. The Wolverines controlled the pace of the game – the game’s 66 possessions were well below Iowa’s 73 possession average – limiting Iowa’s transition offense and finding timely opportunities the other way. Holding a top-five offense to a point per possession output is an impressive showing for a defense that’s been questioned quite a bit.

Iowa did win the ‘free throw gap’ that we discussed in the preview, but it wasn’t by a wide margin and most of the Hawkeyes’ free throw production was after Michigan established a lead. Iowa did almost all of its damage in the lane, only attempting 19% of its field goals from 3-point range and connecting on just 20%

Home teams are supposed to win in the Big Ten. The Wolverines should have won this game and they played like it. They didn’t play their best game, but they dictated the pace and won fairly comfortably despite a shortened bench. Michigan and Michigan State not only enter Saturday’s game undefeated, they are two games clear of the rest of the pack.