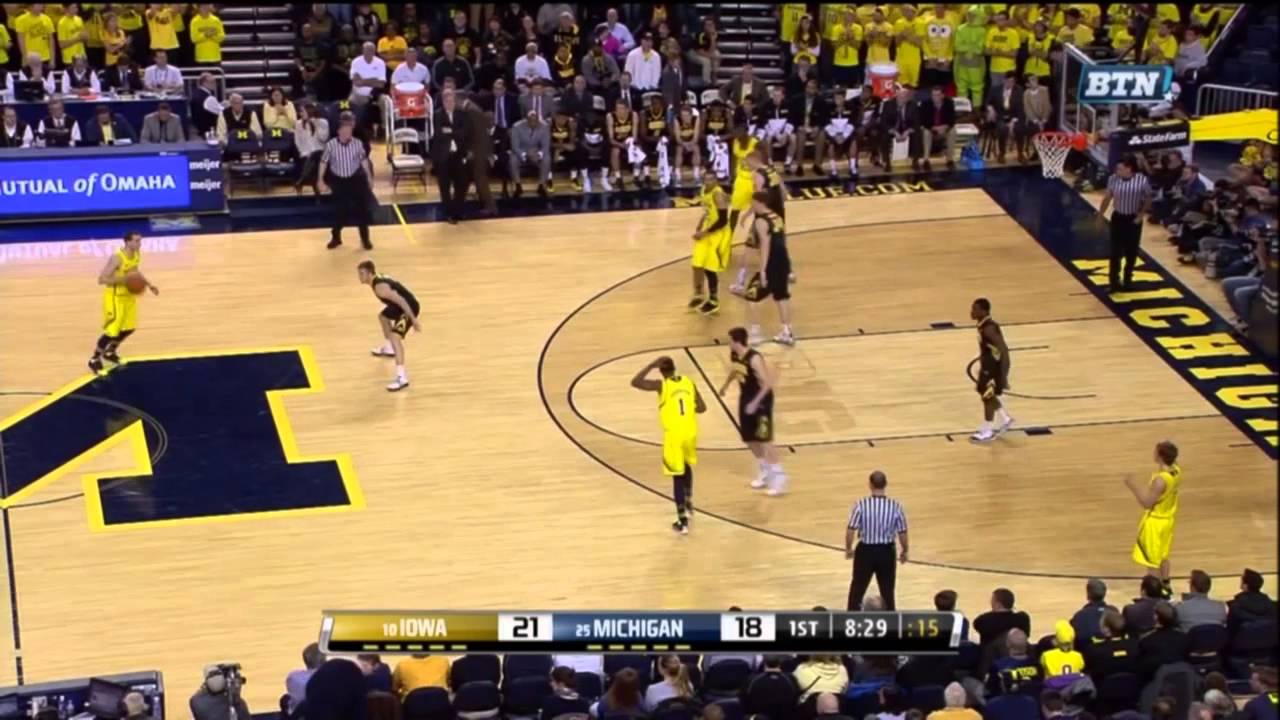 1) Nik Stauskas dominates the first half

What a night for Nik Stauskas. In Michigan’s 75-67 win over Iowa on Wednesday, the sophomore matched his career high in scoring with 26 points, pulled down five rebounds, handed out five assists and registered a block and a steal. Stauskas seems to get better every week, and his vast array of one-on-one moves was on display in the first half against the Hawkeyes. After watching this clip, we can see that none of his shots were assisted — all were Stauskas either pulling up for a contested jumpshot or driving to the rim. Here’s what John Beilein had to say about his performance:

“I’ve watched him two years in practice. I watch him ever day, and he just has that ability right now that’s very rare to get his own shot, to get to the rim, to make foul shots, to draw fouls.”

The first play in this clip is a simple pull-up three, where Stauskas uses his length and lightening-quick release to rise up and get a shot off over the taller Aaron White. Next, Stauskas implements a nasty crossover on White to get to the lane on the drive. Later, Stauskas shows how comfortable he’s becoming with the jab-step fadeaway, badly fooling Jarrod Uthoff before hitting the long two. Next, Stauskas hits an NBA three over Zach McCabe. Finally, Iowa switches on the dribble handoff between Stauskas and Spike Albrecht, leaving Mike Gesell on Stauskas. The sophomore fakes Gesell out of his shoes by acting as though he’s going to use the Jordan Morgan ball screen, but quickly changes directions and drives through the whole Hawkeye defense for the and-1 layup. There’s no other way to say it: Stauskas is making NBA plays for Michigan this season.

This sequence shows the final two plays of an 11-2 run over the span of about two and a half minutes early in the second half. This run got Michigan from its halftime lead of four to up by 11 points, its first double-digit lead of the game. This video features two Wolverines doing what they do best: Glenn Robinson III dunking and Spike Albrecht hustling his butt off. First, Jordan Morgan sets an off-ball screen on Robinson, leaving Aaron White and Gabriel Olaseni confused defensively. It’s likely that how Robinson uses this screen is up to him — he can either cut up toward the ball or sit down at the 3-point line, like he did here. After receiving the ball from Caris LeVert, Robinson employs his go-to move — an up fake, two hard dribbles and a jump stop — to get to the rim. Then on the inbounds pass immediately following, Albrecht just makes a fantastic play to jump the inbounds pass and hit a quick jumper. This is the risk teams run when they want to fast break off of makes — they occasionally will throw a careless inbounds pass in an attempt to get a step ahead. It backfired on this play and Albrecht made them pay. Here’s what Nik Stauskas had to say about Albrecht’s night:

“Spike’s awesome,” Stauskas said. “Obviously, we’d love to have Derrick out there, but we know Spike’s a guy who’s very capable. Any minutes he gets, he’s going to make the best of them and that’s what he did today.”

Michigan’s sharpshooting freshman was able to hit some shots when the other Wolverines (even Nik Stauskas!) went cold in the second half — but that’s not all he did. This sequence starts with Irvin winning a 50-50 ball, which is appropriate given that Beilein has made no secret of his desire for Irvin to go after those situations with more intensity.

“He had a huge (50-50 play) in the right corner, right? Huge one,” Beilein said after the game. “He wasn’t getting 50-50 balls earlier in the year. He was more unsure of his role. What can I do to help this team? I gotta make shots. Between a lot of work from our coaching staff and him being a good student of the game and a willing student, he loves that role too. I can be more than just a shooter.”

While Irvin may be in danger of the old Stauskas moniker — “not just a shooter” — he remains, for now, mostly a shooter. For about three minutes midway through the second half, the only points Michigan could muster was one by Stauskas at the free throw line. Then, Irvin reeled off five straight with a 3-pointer against Iowa’s matchup zone followed by a layup off a run-out — as good a hustle play as any. Finally, he nails a huge 3-pointer in the corner trailing a fast break to give Michigan a seven-point lead with under four minutes remaining.

“The biggest assist of the game was over the top when their zone had us confused, over the top to Glenn,” Beilein said. “(That) was one of the bigger plays this year.”

That’s what John Beilein had to say about this play by Spike Albrecht. This was a big-time play when Michigan desperately needed it. In the latter portion of the second half, the Wolverines’ defense was sagging a bit and their offense wasn’t firing at the same clip it had been for most of the game. Iowa had cut the lead to three with two and a half minutes left and was threatening. Michigan needed to make a play against Iowa’s tricky matchup zone, and Albrecht made it. This play was a combination of great vision by Albrecht and Robinson’s intelligence. All the action on this play is focused at the free throw line, and Iowa’s defense is playing absurdly far up. With the ball hovering around the 3-point line, there isn’t one Hawkeye guarding the baseline or even close to the circle. Robinson sees this and makes an initial baseline cut, and Caris LeVert is looking for him. However, Melsahn Basabe reads his eyes and smartly drifts over to cover Robinson. But when LeVert swings the ball to Albrecht and Basabe moves away from Robinson to cover Stauskas, Robinson stays right where he is, open under the basket. Albrecht throws him a lob that almost goes in the basket, and Robinson makes a solid play by simply laying it in.

This is Jordan Morgan at his best. The redshirt senior has just been making winning plays down the stretch for Michigan since Mitch McGary’s surgery. The two plays in this sequence aren’t just hustle plays — they took athleticism and skill. I mean, look at that save on the defensive rebound, the first play in the video. Morgan is knocked to the ground, somehow still has the presence of mind to locate the ball as it bounces out of bounds, then taps it twice to get it to Caris LeVert. That is just an incredible play. Then, up six points with under a minute left, Morgan somehow gets his hand on a sure Basabe two, leading to free throws for Spike Albrecht. I’ll let Morgan explain what he saw on one of his best individual defensive plays of the season:

“People like to run that action, especially late in the game when they’re trying to get baskets,” Morgan said. “They run screens away and try to get you distracted, and then they’re just going to drive. I saw Devyn Marble driving, and I knew he was going to try to just get to the basket. So I was over there to help. He was able to just get a last-second dropoff. I kind of just gambled and went for the ball on Basabe. I just got a little piece of it to knock it out of his hands.”