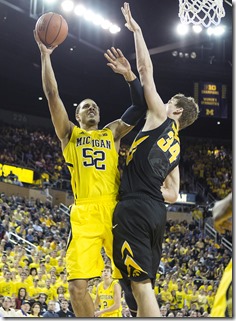 Let’s get this out of the way: Nik Stauskas was terrific in Michigan’s 75-67 win over Iowa at the Crisler Center on Wednesday night. The sophomore continued what has turned into a breakout season. He finished with 26 points, five assists, five rebounds, a steal and a block. I mean, come on. Stauskas is on fire, has been for a while. (Photo: Scott Mapes)

For that matter, Glenn Robinson III was good too — 14 points and nine rebounds (four offensive) is nothing to sneeze at. He also played very solid second-half defense on Melsahn Basabe after the forward torched him in the first half for 15 points.

Michigan’s two star players deserve recognition, that’s for sure. But make no mistake: this game was won because of the extraordinary effort of three role players: Spike Albrecht, Zak Irvin and Jordan Morgan. Their stats, though good, don’t tell the whole story of their collective impact. Instead, critical plays made down the stretch solidify this win as won earned by the less-heralded Wolverines.

Spike Albrecht started the game because Derrick Walton had shown flu-like symptoms and the sophomore played a career-high 35 minutes. Albrecht’s performance was extremely efficient: he attempted four shots and made two of them; he handed out seven assists while making exactly zero turnovers.

John Beilein was asked, during his post-game press conference, how he thought Albrecht handled his first start.

“How do you think he handled it? He handle it pretty good,” Beilein said with a smile. “Seven assists, zero turnovers. Spike was fine. Really pleased with the way he played.”

But it wasn’t just his 7-0 assist-to-turnover ratio that made Albrecht’s performance so special. It was three plays he made late in the game that made a huge difference in sealing Michigan’s second victory over a top-10 team in five days. Early in the second half, Albrecht gave Michigan its biggest lead of the game by following up a Glenn Robinson III dunk with a steal and 16-foot jumper off the inbound pass.

When the Hawkeyes narrowed the deficit late, Albrecht stole a pass upcourt from Roy Devyn Marble as Iowa attempted to cut Michigan’s lead to two with under four minutes left. Five seconds later, Zak Irvin was hitting a 3-pointer (we’ll get to him later).

Just two minutes after that, Albrecht made a brilliant pass over the top of Iowa’s zone when Michigan was struggling to figure out what the Hawkeyes were playing on defense. Albrecht hung a pass out over the rim for Robinson late in the shot clock as Iowa was cutting into Michigan’s lead and Robinson tipped it in to maintain some breathing room with two minutes left. Beilein said this pass was “one of the bigger plays this year.” Finally, Albrecht stretched a two-possession game to three when he hit two free throws with 44 seconds left.

Three plays that swung the game in their own way. After the game, Iowa coach Fran McCaffery summed up Albrecht thusly:

“He’s a good player. He’s a guy who understands how to win,” McCaffery said. “He gets them into their stuff. He finds people and he guards. Smart, tough.”

Those last two adjectives have also been used often when describing Jordan Morgan. The redshirt senior has seen it all, and at the moment he is playing arguably the best basketball of his Michigan career. Morgan’s stat line was terrific — 12 points on 5-of-6 shooting and seven rebounds. But outside his numbers, he made a couple plays late that went a long way toward sealing the win for the Wolverines.

First, he made an impossible save with just over a minute and a half left, tapping the ball twice going after a defensive rebound while falling out of bounds so that it eventually found its way safely to Caris LeVert. Then, on a shot by Basabe with under a minute left that would have cut the lead to four, Morgan rose up and blocked the Iowa senior at the rim. Albrecht found the ball and was fouled, and the Michigan lead was preserved.

It’s been a long road back for Morgan, but he is back to making tough, smart, winning plays down the stretch for the team he’s given the past five years to.

“This is the old Jordan who we all saw,” Beilein said. “All of a sudden, here’s a great lesson in front of him. You never know how things are going to turn out. Really proud of him. Love that kid.”

And finally, we arrive at the other end of the age spectrum with Zak Irvin. The freshman hasn’t been very consistent this season – he’s only hit one three since he went off for five of them on the road against Minnesota — but against Iowa he came to play.

A little after the midway point of the second half Michigan was really struggling to find open looks, scoring just one point during a three-minute stretch prior to Irvin’s first basket of the half. Then, Irvin got hot. The freshman tracked down an offensive rebound before he buried a 3-pointer and then finished a contested transition layup. Just a few minutes later, Irvin finished the play Spike Albrecht started this post with his final three of the game. It gave Michigan a seven-point cushion to work with heading into the final three minutes.

“We wouldn’t have won this stretch if Zak hadn’t done the Stanford, the Minnesota games,” Beilein said afterward about Irvin. “Those are huge wins for us when we didn’t have a lot of this confidence.”

Beilein’s right — Irvin was integral in each of those games. And Michigan doesn’t win against Iowa without the timely contributions of Irvin and two of his unheralded teammates. That’s precisely what makes Michigan’s offense so deadly — you never who’s going to score on you on any given play. Heck, even Morgan hit a pretty midrange jumper off a pick-and-pop.

Nik Stauskas and Glenn Robinson III have grabbed much-deserved headlines this season, and they’ll grab more still. But for Michigan to win tough Big Ten games, games like its gutty win over the Hawkeyes Wednesday night, it will need performances like the ones it received tonight from Morgan, Albrecht and Irvin.