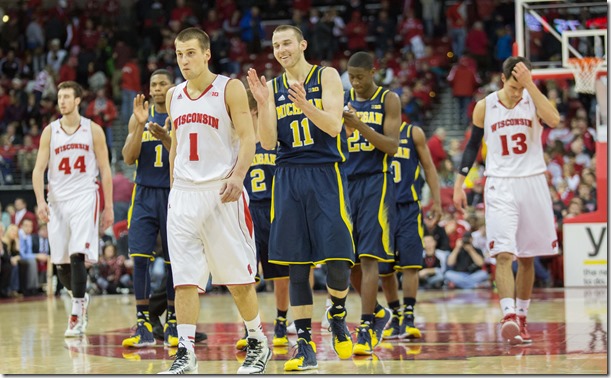 Our weekly feature tracking the performance of Michigan players performance over two game segments of the season. Form Tracker is now interactive. Readers can vote on each player’s rating by hitting ‘Too low,’ ‘Too high’ or ‘Agree.’ (Photo: Chris Smith)

Michigan’s star sophomore continues his merciless rampage through the Big Ten. Over the course of Michigan’s past two games — both against top-10 teams and one on the road, I might add — Stauskas put up stupefying numbers. His averages? 24.5 points, 4.5 rebounds, 4.5 assists, 1.5 blocks and 1 steal. But it’s not just that his numbers are great — against Wisconsin, Stauskas hit what turned out to be the game-winning 3-pointer with under a minute left. In a head-to-head matchup with the other top scorer in the Big Ten Wednesday night — Iowa’s Roy Devyn Marble — Stauskas outscored him 26-13. The young Canuck just can’t be stopped right now.

I asked Jordan Morgan after the Iowa game Wednesday if he is currently playing the best ball of his career. He demurred with a smile, shifting credit for his recent accomplishments to his teammates. That’s just Morgan’s way. But looking at his numbers, it’s tough to find a time when they were this good. Against Wisconsin Morgan was nearly flawless, making every shot from the floor and registering eight rebounds and three blocked shots. Against Iowa, the redshirt senior was on another level: Morgan hit all but one of his six field goal attempts for 12 points, pulled down seven rebounds (two offensive) to go along with a game-changing block and a steal. He even hit a midrange pull-up like it was nothing. There’s no question about it: Jordan Morgan is back and better than ever.

Glenn Robinson III was efficient against Wisconsin, scoring 14 points on eight shots, though he didn’t grab a rebound. The sophomore made some plays against Iowa and played great second-half defense against Melsahn Basabe. Robinson also made up for his poor rebounding effort in Madison by pulling down nine rebounds (four offensive) against the Hawkeyes. Robinson continues to lack consistency from the 3-point line. Outside of a 3-for-6 stretch against Nebraska and Penn State, Robinson is 0-for-10 in Big Ten play.

Spike Albrecht got his first career start against Iowa and he made it count. In 35 minutes, the sophomore scored seven points on 2-for-4 shooting and handed out seven assists. Albrecht also made some decisive plays on the Hawkeyes late in the game, hitting Robinson for an alley-oop over the zone with two minutes left as well as corralling the defensive rebound after a block by Jordan Morgan with under a minute remaining. And at the free throw line, Albrecht sank two to put the game away. One more thing: Albrecht has continued his turnover-free ways, as he hasn’t registered one yet in conference play.

Michigan’s lanky guard put forth a tremendous effort against Wisconsin on the road. LeVert gave Michigan a lift with his 3-point shooting, making all three of his attempts from beyond the arc. While his shooting percentage wasn’t great, he ended up with 20 points, seven rebounds and four assists in the course of picking apart the Badgers’ pick-and-roll defense. However, against Iowa, LeVert looked lost. in 34 minutes, the sophomore tallied just five points and registered three turnovers to only one assist.

Jon Horford was very solid against Wisconsin, scoring six points, grabbing seven rebounds and blocking two shots. However, against Iowa the big man only played eight minutes due to a confluence of Morgan playing great and foul trouble. Horford has shown a diversified offensive game in conference play and his defense was critical against the Badgers. It’s starting to become apparent that games like the one he played against Wisconsin can be considered more his norm than the one he played against Iowa.

Michigan’s freshman sharpshooter is still learning how to be consistent with his game. Irvin was a non-factor against Wisconsin, playing only 14 minutes and taking two shots. Against Iowa, Irvin wasn’t used a whole lot more but he made his 16 minutes count: the freshman scored 11 points while chucking up seven threes, and provided Michigan with much-needed offense midway through the second half.

Walton had to sit out most of the Iowa game with flu-like symptoms, which partially explains his low score this week. Against Wisconsin, the freshman wasn’t particularly effective, scoring only two points in 31 minutes while handing out two assists, but he did play a strong defensive game against Wisconsin’s guards.