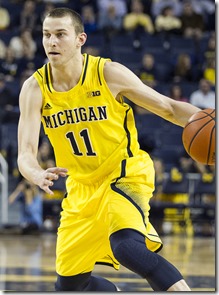 There’s no getting around it: Michigan’s matchup against Michigan State in East Lansing last season was an unmitigated disaster. The Spartans jumped on the Wolverines early and cruised to a 23-point win that truthfully wasn’t even that close. (Photo: Scott Mapes)

Many factors contributed to the outcome of that game: Michigan had just lost a heartbreaker to Wisconsin on the road, it was the tail end of a brutal Big Ten stretch, the Wolverines were playing five freshmen, etc. There were plenty of excuses for losing to Michigan State on the road, but the nature of the loss was so jarring that John Beilein, during his press conference on Friday, found himself digging for just what went wrong.

“It’s hard to put your finger on it,” Beilein said. “They jumped on us early as everybody knows. We were playing five freshmen. Ohio State they jumped on us early and we battled back. That one, we just couldn’t. Their defense was so suffocating. Trey’s foul trouble didn’t help. He was out of there early. I think from their standpoint, their play matches up really well with us.”

Many pointed to the pulsing atmosphere at the Breslin Center, given the hype surrounding the matchup of two top-10 teams just an hour apart from each other. However, Beilein said he didn’t think the atmosphere was the issue last year and he maintained that it won’t be the issue on Saturday either.

Most of Michigan’s players are used to the big stage because of the team’s high ranking last season and the deep NCAA tournament run. College Gameday being in East Lansing will be nothing new.

However, it remains to be seen how the Wolverine freshmen, Derrick Walton and Zak Irvin, will respond to the bright lights. It’s worth noting that both have experienced loud, boisterous crowds on the road this season — Iowa State and Duke come to mind — and both have responded in big ways. Walton hit the game-winning shot against Nebraska on the road, and Irvin came up big in the first Big Ten road game of his career against Minnesota, hitting five threes.

Beilein said it’s impossible to anticipate how each freshman reacts to a given situation.

“Zak Irvin could come off and he could hit four in a row like he did in Minnesota,” Beilein said. “He can do those things. At the same time, they might be normal freshmen. We’re hoping they’re a little different this time, they’re uncommon.”

On the Michigan State side, the Spartans are short-handed heading into Saturday’s matchup. With Adreian Payne’s nagging foot injury and now Branden Dawson’s broken hand, Michigan State is faced with the prospect of playing much of the remaining Big Ten season without two of its stars.

This opens up the possibility of the Spartans playing small, similar to how Michigan plays on a night-in, night-out basis. While it may seem like a bit of relief for Beilein to possibly be going up against a team whose size may match his own team’s more closely, Beilein made it clear that it is not.

“There is nothing about playing State that is a relief,” Beilein said. “They put Valentine as a four man, then they’ll be quick as heck all over the place, you know? They’re not the post-up team they’ve been in the past. As a result, they may be really good playing small. I think they have been. No matter what five players they put on the floor, they’re going to be good.”

One area where the Spartans dominated in last year’s matchup was in the fast break. Michigan has been vulnerable on fast break defense, but can draw some confidence from how it dictated the pace against Iowa on Wednesday.

Beilein said his team will be working plenty on drilling fast break defense in practice leading up to Saturday.

“We went into Iowa worried about tiring the guys out because we worked so hard in practice on our transition game. I hope there’s a huge carryover,” Beilein said. “But they’re even better than Iowa in it. We’re still working on it today, probably 15 minutes overall with what we call ODO — offense to defense to offense. It is a big part of today’s practice. We just played Wednesday night, so you don’t want to tire them out, but I think it’ll carry over.”

Michigan has an opportunity to pick up a big win here against a depleted Michigan State team in East Lansing. If the Wolverines continue to play as they have over their past two games against top-10 opponents, they can look forward to a much different outcome from last season’s debacle.