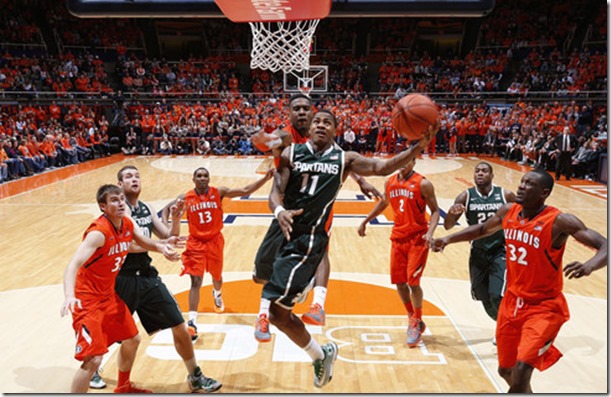 The Spartans have sat in the top ten all season, dropping just one game. Michigan started in the top ten, but fell all the way out of the top 25. Now, without Mitch McGary, the Wolverines are climbing again. Winners of their last eight games, they are peaking at the right time to make a run at the conference title after victories at Wisconsin and against Iowa.

Michigan State is the odds on favorite to win the conference, but will be without Branden Dawson – who broke his hand punching a table – and potentially Adreian Payne – who has been sidelined with a foot sprain.

The Breslin Center has been unforgiving to the Wolverines. Michigan has just one win in East Lansing since 1997, a memorable upset on January 27th, 2011 that seemed to change the course of its program. Last year the Wolverines traveled to East Lansing with a top ten team and suffered their most lopsided loss of the season – a 23 point defeat.

Michigan State’s offense is ranked 26th nationally in adjusted efficiency and the Spartans are scoring 1.09 points per Big Ten possession – fifth in the conference. Michigan State shoots a few more threes than the average Izzo team, with 33 percent of its attempts from beyond the arc, and is quite accurate as well. The Spartans are shooting a league-leading 39% from 3-point range in Big Ten play compared to just 48% (6th) on 2-point field goals. The Spartans don’t have massive turnover issues, giving the ball away on 17.5% of their possessions (8th) in Big Ten games), but they aren’t great either. By the numbers, this isn’t as good of an offensive rebounding Michigan State team as we are accustomed to. The Spartans have rebounded a modest 32% of their misses in Big Ten games (6th) and 32.8% (141st) for the season. With Dawson, Michigan State’s best offensive rebounder, these numbers should take an even bigger hit.

The Spartans have great interior defense, leading the league in 2-point field goal percentage allowed, 41.4%, and block percentage. Michigan State also forces turnovers on 21% of Big Ten opponents’ offensive possessions and leads the league in steal rates. The Spartans are among the best teams in the league at forcing turnovers and turning them into points on the other end.

Keith Appling and Gary Harris lead the way for the Spartans and they might just be the best backcourt in the Big Ten. Appling is having a career year in his senior season, finally knocking down the three-point shot with consistency and developing into the point guard that Tom Izzo has always wanted him to be.

Harris is a future NBA lottery pick. He’s a dynamic two guard that’s lethal in transition or the halfcourt and gets after it on defense. We profiled his game in our First Look, but he’s finding another level of effectiveness in Big Ten play.

Travis Trice is a serviceable backup point guard. Over half of his field goal attempts are threes, but he connects at a 42% clip. He’s not a great passer and his assist rate of 18.7% is about equal to Michigan’s Derrick Walton.

Denzel Valentine is an all or nothing proposition. He can make some brilliant plays, but he makes his fair share of ugly ones as well. With Michigan State’s injuries, Valentine’s rebounding ability (he had 12 rebounds when these two teams played in East Lansing last season) and versatility should be critical. He could very well play the four position at times if Michigan State tries to go small to match the Wolverines. Valentine isn’t a great shooter (30% on 3s, 44% on 2s), but he’s Michigan State’s second best passer after Appling.

In the frontcourt, things get a bit dicey. Payne is probably the best big man in the Big Ten. He can run the floor, he can crash the glass, post up or step out and hit the three. But he’s hurt and not expected to play. Without Payne and Dawson, the Spartans are without their starting frontcourt and best rebounders (Dawson is the No. 2 offensive rebounder in the conference).

Matt Costello has started at the five for most of this season, but he plays just 32% of available minutes. Costello has 10 field goals and 7 turnovers in six Big Ten games. He’s a low usage player, but he can protect the rim and he did score 8 points against the Wolverines last season.

Kenny Kaminski is expected to start in Branden Dawson’s absence at the four. Kaminski is a completely different player than Dawson. While Dawson is a strong, imposing, athletic forward with a knack for grabbing defensive rebounds, Kaminski is a prototypical stretch four. Kaminsiki is shooting 55% on 3-point attempts and 82% of his shots are threes. Kaminski will be able to stretch the floor much more effectively than Dawson, but the Spartans will lose some rebounding punch.

Gavin Schilling and Alex Gauna will also be called upon to shoulder significantly more minutes. Michigan State’s backup big men both measure in at 6-foot-9 and 240+ pounds, but Schilling is the better rebounder of the two, but hasn’t played double digit minutes since December while Gauna registered 20 minutes at Northwestern.

Ken Pomeroy projects a 71-66 Michigan State victory, but gives the Wolverines a 32% chance at pulling off the upset. Add in injuries to Adreian Payne and Branden Dawson and it’s tough not to muster at least a bit of enthusiasm about the Wolverines’ chances.  The opportunity to steal a third win over a Big Ten contender before the end of January is golden.