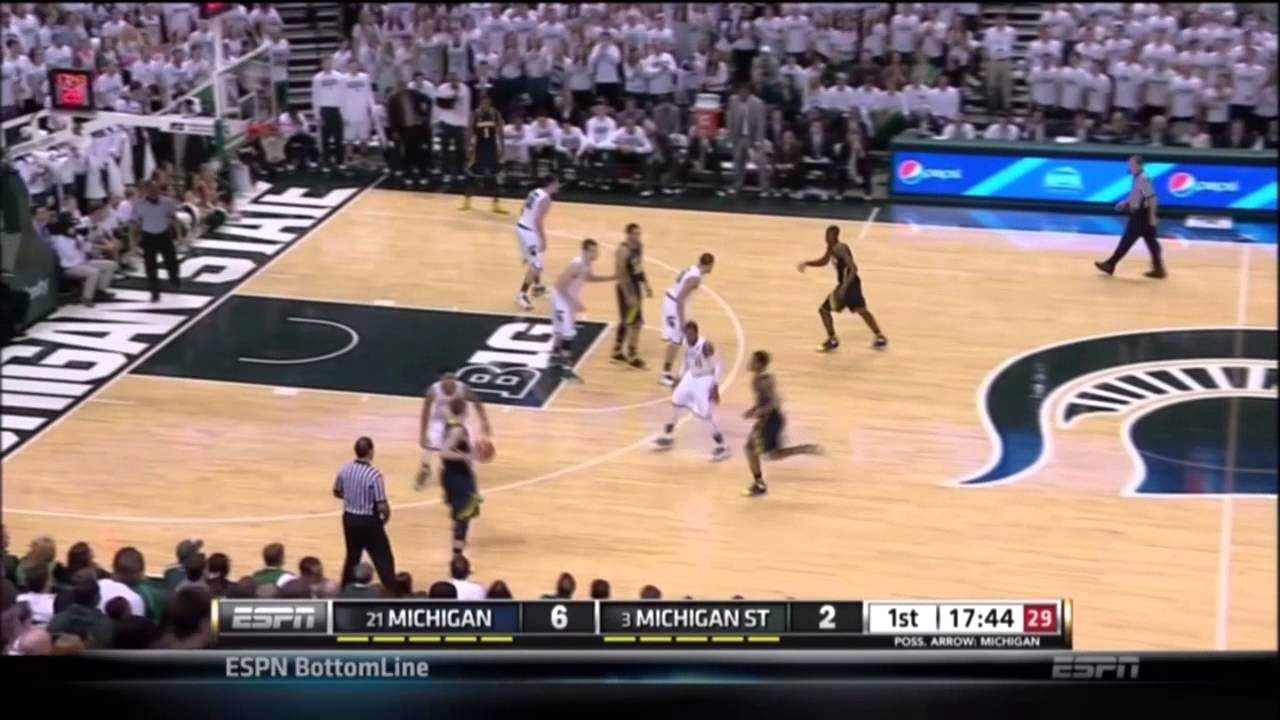 1) Michigan starts the game off hot

From the very beginning of Michigan’s 80-75 win against Michigan State in East Lansing, it was apparent that this year, things were going to be different. The Wolverines scored on their first four possessions, hitting 3-pointers on their first two, and established a 10-2 cushion early on. Derrick Walton, who played the best game of his young career on Saturday night, set the tone with a fearless pull-up triple — in the face of the 6-foot-8 Kenny Kaminski. Later, we see just how difficult it was for Nik Stauskas to find an open shot on the night — and the lengths to which he would go in order to get one. With the shot clock winding down, Jordan Morgan sets a great screen on Gary Harris that completely takes him out of the play. Matt Costello is late rotating onto Stauskas and probably has no intention of contesting a guard that far out anyway. Stauskas rises and fires and hits the long three. Something to notice: Stauskas waits to make his move to the screener until Harris sticks his hand out for the ball, leaving Harris just enough off-balance to be taken out by the screen. If Harris was just staying in front, he probably goes under the screen and contests harder — great recognition by Stauskas. On the following offensive possession, Stauskas attempts to shake Harris off the dribble, but Harris stays on him and contests. Stauskas won on this play mostly because of his height. This play is an accurate microcosm of the duel between these two players — Harris playing great defense, Stauskas hitting extremely tough shots. On the final play of the sequence, Glenn Robinson III hits a turnaround fadeaway off a post-up on Kaminski. Michigan simply couldn’t miss in the game’s first three minutes.

Unfortunately for Michigan, its hot-shooting ways didn’t continue through the whole opening frame. The Wolverines experienced two separate 3-minute scoring droughts in the first half that allowed Michigan State to take control of the game. To go along with that, they got absolutely nothing inside because of Michigan State’s ability to completely shut down the lane and eliminate gaps for driving. Michigan offense was searching for answers with three and a half minutes left in the half after two Matt Costello free throws extended Michigan State’s lead to eight points. Then, Michigan got some help when it needed it most from its two freshmen. First, Derrick Walton made a great play to get a step on Russell Byrd off the dribble. Matt Costello is on Zak Irvin on this play because of a switch earlier on that left Gary Harris on Max Bielfeldt. This is undoubtedly an uncomfortable matchup for Costello, who plays too far off Irvin. Irvin hits the three after Walton drops the ball off to him and it’s hand down, man down for the Spartans. On the ensuing defensive possession, it looks as though Walton gets a hand on the ball as Keith Appling splits the double-team and knocks it loose. Nik Stauskas rewards Walton for his effort by tossing the ball ahead for the freshman point guard to finish at the rim. Walton finishes with contact and gets the foul, closing the Spartan lead to just two and thoroughly swinging the momentum in favor of the Wolverines.

3) Michigan scores inside to kick off the second half

The Wolverines’ primary tool for getting the ball in the post is the drive off pick-and-roll action. This is what Michigan State effectively shut down in the first half. So in the second half, Michigan attempted to find some other ways to get the ball in the paint — and the Wolverines scored their first two buckets of the latter frame in the post. The first play was a terrific individual effort by Glenn Robinson III as the sophomore used a Jordan Morgan screen to make his way slowly toward the basket. The Spartans actually guarded the action very well, with Costello helping until Kaminski recovered and then getting back to Morgan to prevent the dump-off. Robinson simply gets stuck in the lane without a dribble but doesn’t give up on the play, keeping his pivot foot in place while maneuvering around Kaminski for the tough lay-in. The second play in this sequence begins with some solid defense by Robinson on Kaminski and a tough defensive rebound by Morgan. Morgan sets a pick for Walton and the freshman makes a terrific pass to the redshirt senior rolling off the ball screen. The Spartans almost defended it really well — Costello was just a little bit late getting back on Morgan, and Walton made him pay with an excellent pass and Morgan finished strong.

Nik Stauskas made his share of plays in East Lansing on Saturday. The sophomore scored 19 points on 12 shots, going 5-of-6 from the 3-point line, along with dishing out four assists. But this shot, during a rare moment when the Spartan defense wasn’t set and Stauskas had the opportunity for a clean look at the basket, was one of the biggest plays the sophomore has made all season. With Michigan State forcing the issue on the fast break, Keith Appling drives to the basket, where Horford is already in excellent position. The redshirt junior sticks his hands straight up and makes a wall, with Appling looking for contact but not getting the call. Caris LeVert had as much to do with this Stauskas 3-pointer as Stauskas himself, as he pulled down the defensive rebound and immediately pushed the ball upcourt with Stauskas trailing just behind. LeVert knew where he was going with the ball the whole time, leaving it for Stauskas at the 3-point line. Stauskas hit the open three and Michigan was suddenly up three points. Stauskas clearly had last year’s debacle at the Breslin Center on his mind throughout his performance.

“My freshman year I had an opportunity to come in here and play in a really hostile environment,” Stauskas said. “I think I learned from that and came in here and just had fun playing.”

If blowing kisses to the crowd after the game was any indication, it seems like Stauskas had plenty of fun on Saturday.

Michigan’s defense down the stretch, and particularly on this play, deserves as much attention as Derrick Walton’s tough lay-in at the other end. The Wolverines held Michigan State scoreless from the 4:19 mark until a Matt Costello layup with 1:46 remaining. During that time, Michigan went from down two to up eight and the game was all but in the bag with the Spartans intentionally fouling. On this possession, Jon Horford and Glenn Robinson III combine to make a great play on the ball as Keith Appling drives to the basket. Horford tracks him through the lane, setting him up for a block from behind, while Robinson slides over baseline and taps the ball away from the rim and toward Caris LeVert. The timely rebound leads to a run-out situation, with LeVert tossing the ball ahead to Walton, who’s smartly sprinting down the court. Important: LeVert’s pass was made at exactly the right time, and it was so quick it was almost a touch pass. Great, fast decision-making by the sophomore. When he was asked about the and-1, Walton couldn’t contain a smile.

“I caught the ball on the run, I think Caris threw me the ball,” Walton said. “I had one defender and I made a move, made the layup and it was a big momentum swing for us.”

Michigan’s free throw shooting was derided for much of the early portion of the season, but recently in Big Ten play it has been tremendous. It was especially impressive on Saturday night — specifically for Derrick Walton. The freshman has been through a few situations where he hasn’t been able to make some key free throws at the end of close games, but he came through in a big way against Michigan State. The Wolverines shot 83 percent on the night from the charity stripe, and the only player who missed more than one free throw was Spike Albrecht. Walton was 9-for-10. If Michigan doesn’t hit these shots, the end of this game is much different. Instead, the Wolverines sealed the game at the line.