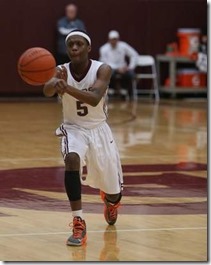 Winston finished with 18 points in a 75-57 U of D victory. Winston is one of the top in-state prospects in the class of 2016 with a composite ranking of 26, and has visited Michigan, Michigan State and Ohio State among others.

Watch video of Winston’s performance in the embedded media player below.

Brunson was fantastic and efficient in the win over Marian Catholic, scoring 32 points on 8-for-14 shooting while also grabbing seven rebounds and making numerous big plays. The lefty guard hunts his shot and looks for teammates and can do so much on the floor thanks to his tremendous basketball IQ. Brunson changes paces well and since he’s able to stop on a dime and score from anywhere, he’s always a threat to score.

More on Brunson, Jalen Coleman and new recruiting targets after the jump.

The Chicago Sun Times reports that Michigan is in a very strong position for Brunson’s services, but his recruitment continues to expand.

Expect Kansas coach Bill Self and his staff to pick up its recruiting and become a much bigger player with Stevenson junior point guard Jalen Brunson. The No. 2 ranked prospect in Illinois in the Class of 2015 will have a slew of high-majors to choose from at the end of the day, but keep an eye on Michigan, which has been front and center and done a terrific job since the early stages of his recruitment.

Jalen Coleman continues to emerge as one of the best junior prospects in the state of Indiana.

Coleman has integrated quickly after transferring to La Lumiere and has had the opportunity to play at a number of national and regional showcase events including the Hoop Hall Invitational and Dunk 4 Diabetes Classic.

LaVall Jordan was in town to watch La Lumiere on Sunday against Warrensville Heights. Coleman scored 20 points in the 57-54 win, but 17 came in the first half. Here’s footage from that game.

La Lumiere also topped Cleveland Central Catholic on Saturday, Coleman had 19 poitns on 8-of-10 shooting in the win (recap & video). Coleman was a ridiculous 16-of-20 from long range over the last three games.

Many in attendance thought Coleman was one of the most impressive players.

The top junior in the state of Indiana has been getting it done for a while now, and has continued that trend at La Lumiere. He played lockdown defense, shot the lights out of the ball, and hit timely free throws to help seal his squad’s narrow win over a tough Warrensville Heights team

Coleman was also named the best guard by ESPN at the Hoophall Classic in Massachusetts earlier this month.

Every part of Coleman’s performance was impressive on Sunday. He shot the ball extremely well from long range, was low to the ground with his rips and created space in the mid-range area. Defensively he was equally impressive, shutting down Kobe Eubanks, rotating well away from the ball and communicating appropriately. More impressive than his production was the fact almost everything he did on both ends of the floor would have translated into a college game.

Here are some additional junior highlights of Coleman:.

Michigan’s recruiting radar continues to grow this winter and there are a number of new prospects on the Michigan radar.

In Ohio, the Wolverines have been paying close attention to class of 2015 forward Esa Ahmad and class of 2016 big man Derek Funderburk . Bacari Alexander recently watched Ahmad play at Flyin’ to the Hoop in Dayton.

ESPN was impressed with Ahmad at the event.

Ahmad is an up-and-coming, versatile, high-post 4 man. He is tough to defend because he is strong and active on the low block, can drive to the paint off the dribble and has a very effective mid-range game. He is one of the fastest risers in the country. He had 28 points and nine rebounds in Shaker’s victory over St. Louis Christian Brothers.

Coming off of the bench for Ohio’s top team, Funderburk brought the total package. Offensively, he showed off great footwork on the blocks and made some outstanding passes for a 6’9 guy. Defensively, he displayed great range defending on the perimeter and presence as a shot-blocker on the interior. Ohio’s #2 sophomore definitely lived up to his reputation in yet another St. Ed’s victory.

The Wolverines are also showing interest in Matt McQuaid, a 6-foot-5 guard from Texas. McQuaid is rated has a composite ranking of 51 in the class of 2015. Here’s footage of McQuaid in action.

Australian point guard Dante Exum had discussed attending college for a year, and had named Michigan in his top five, but declared for the NBA Draft today. Exum is viewed by many as a likely top-five pick in this year’s draft. Exum will be represented by Rob Pelinka.