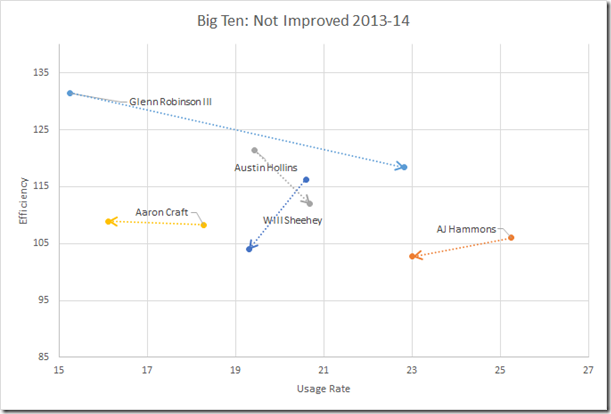 Ferrell was an afterthought in Indiana’s offense last season. He was Indiana’s fourth option and his job was to pass the ball to the lottery picks on the floor with him. He did a pretty good job of that, and Indiana wouldn’t have won the Big Ten without him. This year, Cody Zeller, Victor Oladipo, Christian Watford and Jordan Hulls are all gone and while Indiana has taken a step backward, Ferrell has taken as big of a step forward as anyone. Ferrell increased his usage rate by over 7% while still managing to become more efficient – on an offense that isn’t.

Stauskas, like Ferrell, spent most of last year deferring to NBA first-rounders. He was extraordinarily efficient, but he used just 16% of Michigan’s offensive possessions. While everyone loved to kid that he ‘wasn’t just a shooter’, he still spent most of his time shooting jumpers. His improvement this season has been covered Ad nauseam, but he’s managing to use 8% more of Michigan’s possessions while somehow increasing his efficiency. Stauskas is shooting the ball better inside and outside the arc and he’s also attempting free throws nearly twice as often as a year ago. He’s is ranked ninth in Ken Pomeroy’s National Player of the Year metric and about the only knock might be that he doesn’t use an astronomical number of possessions like some of college basketball’s other stars.

Started from the Bottom

Player 1 is Caris LeVert, Player 2 is Tim Hardaway Jr. last season. LeVert isn’t Hardaway by any means, but he’s come awfully close to filling his production as a sophomore. Considering LeVert’s freshman numbers – 22.6% of minutes and 93 offensive rating – that’s an impressive accomplishment. LeVert has emerged as a major isolation threat for John Beilein’s Wolverines and he continues to find opportunities as opposing defenses focus on Stauskas and Glenn Robinson III. The next step in his development will be using his ability to get in the lane off of ball screens and isolations and find his teammates either at the rim or on the perimeter.

Jackson started to come on late last season, but he’s continued moving forward this season. Jackson played a lot of minutes as a sophomore, but he turned the ball over on a quarter of his possessions, shot 41% on twos and just 29% on threes. As a junior, he’s raised his offensive rating 15 points to 105.8, cut down on his turnovers and improved his shooting.

Playing on a good team doesn’t always mean more opportunities. Aaron White plays on one of the deepest, most balanced squads in the country, but he’s managed to improve his efficiency and scoring output with a slight decrease in usage. White has the tendency to drift in and out of games, but when he’s involved in the offense he can be devastating. Most notably, he’s one of the best fast break players in the conference.

It’s tough to put Dawson on this list because he’s sidelined for a month after breaking his hand while watching film, but his offensive efficiency saw a massive up-tick this season. Dawson was finally healthy from his injury plagued sopohomore, and he improved his offensive rating by 20 points. His turnovers are down, his rebounding is up, and he’s finishing more effectively. Now Michigan State just needs to get him back for a NCAA tournament run.

Kaminsky’s efficiency numbers haven’t changed much, but his playing time has. Last year he played just 23% of available minutes for the Badgers, this year that number is up to 65.5%. Kaminsky has managed to improve on almost all of his tempo-neutral statistics with increased playing time — an impressive feat that’s allowed him to triple his per game averages.

Olanesi probably still needs more of a chance, as he’s playing only 37% of available minutes for the Hawkeyes, but he’s using far more possessions and continues to be a shotblocking and rebounding presence around the rim.

Robinson is using a lot more possessions this season, and his efficiency numbers from last season would be almost impossible to replicate at that rate, but he hasn’t been nearly as effective.  Robinson’s offensive rating of 115.6 points per 100 possessions isn’t bad – it ranks 10th among Big Ten players that use at least 20% of their teams offensive possessions – but it’s not quite the stuff of an NBA lottery pick.

Everybody loves to talk about Hammons’ NBA potential, but he hasn’t realized it yet. Hammons is massive, skilled and a good shot blocker, but he just can’t put it all together. With so much size and skill, it’s almost unexplainable that Hammons has been held to single digit scoring ten times this season.

Ohio State desperately needs an offensive threat, but Aaron Craft is using fewer Buckeye possessions than he did a year ago. Sure, Craft has kept up his pedestrian level of efficiency, but his inability to step up as a go-to scorer is obvious for a floundering Ohio State offense.

Yogi Ferrell stepped up in Bloomington, but Will Sheehey is stuck in neutral. Sheehey is using fewer possessions and is less efficient this season. His 2-point and 3-point shooting numbers are down and he’s turning the ball over more often than a year ago. Sheehey, like Robinson, had the luxury of being a secondary option on a team filled with pros, and has struggled a bit as the focus of opposing defenses.